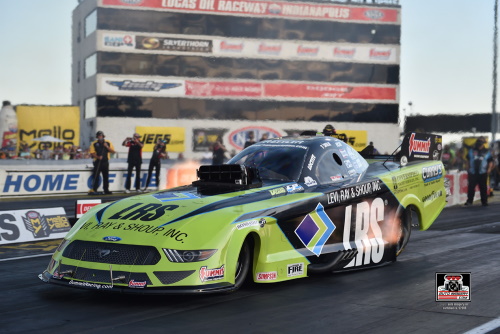 BROWNSBURG, Ind. (September 7, 2020) – Tim Wilkerson and his Levi, Ray & Shoup Ford Mustang Funny Car rebounded from a disheartening early exit three weeks ago by racing to the semifinal round at the biggest race on the NHRA tour, the 66th annual DENSO Spark Plugs NHRA U.S. Nationals.

Wilkerson collected pleasing passes in qualifying to secure the No. 3 position, tying his best start of the season to date. His lofty perch came with a first-round meeting with part-time campaigner Dave Richards. With the higher qualified car, Wilkerson earned the right to select where in the run order they would meet, and as he has done in the past, the eager driver/tuner opted to be the first pair out.

Again, Wilkerson elected to be first pair out for the second round. There he was to meet longtime Funny Car campaigner Bob Bode, and the two were delayed just before the waterbox as they watched NHRA’s Safety Safari refresh the racing surface after an earth-shaking pedalfest performed by the last two Top Fuel dragsters.

“I don’t like getting beat at the biggest race of the year, but I’m pretty excited about how our Levi, Ray & Shoup Ford is running,” said Wilkerson. “That last round was so close – you’d almost rather smoke the tires than lose a race that close. But the crew chief in me is glad it didn’t end that way. At least I had a chance to learn something.

“We sure have a good car. That run was low e.t. of the round, and it would have beat any other car than the one we raced. But it’s okay. If we keep tapping on the door, one of these days it’s going to open up.”

The next scheduled is the Amalie Motor Oil NHRA Gatornationals, September 25-27, 2020.