DODGE CITY, KS (September 12, 2020) – He climbed atop his Drydene Performance Products #1a in Dodge City Raceway Park Victory Lane, the emotion already building inside of him.

Since the trying days of his rookie year with the Outlaws back in 2014, there’s been nothing more Allen has wanted to do than be a World of Outlaws Feature winner. And now, after coming so close so many times, he’s finally done it.

Leading all 30 laps of Friday night’s Boot Hill Showdown opener, Allen was flawless throughout. But in the closing circuits, a sour memory briefly crossed his mind.

“I looked up at the [lap counter] at some point at the end there, and I saw it said three-to-go, and I was like, ‘oh man, I know what this is like, leading with about three-to-go and then breaking.’ So, I was just being cool and racing my race.” 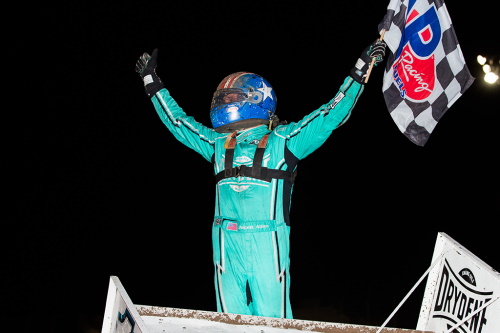 Allen flashed back on the disappointment of his run at Stockton Dirt Track in September of last year, leading the NOS Energy Drink Showdown with under three laps remaining when an ignition box failure struck, sending him to the infield as his Shark Racing teammate Logan Schuchart zoomed on by to win $20,000.

But that’s all behind him now. Shark Racing can now eat from the fruits of their labor – the labor that Allen takes so much pride in.

“So much has gone into it,” he said. “Being so close to just giving up and not wanting to do it, but just to come back this year and take a whole new look on everything and be positive and be cool about it. Finally, this has paid off, and to have Logan second is pretty badass.

“I’m just thankful to drive this #1a with Drydene on it, and Logan, and this whole team to be part of Drydene, racing and my dad… This is an honor. I’ll never forget this.”

Of course, no victory ever comes easy against the World of Outlaws, and Allen’s first was no exception. Starting from the outside pole, Allen beat polesitter Tim Kaeding into Turn 1 on the opening lap and shot out to the early lead, Schuchart right behind him.

Down the backstretch the teammates raced on Lap 2, almost completely even as they entered Turn 3. Allen was able to pull away slightly, but Schuchart came back at him on the bottom one lap later; Allen again denying him with speed down the straightaways.

A series of caution flags were thrown for debris around the halfway mark, forcing Allen to hang tough on the restarts. Which, he did. With the likes of Schuchart, Donny Schatz, David Gravel and Brad Sweet behind him, not once did the Hanover, PA-native flinch when the pressure was on. 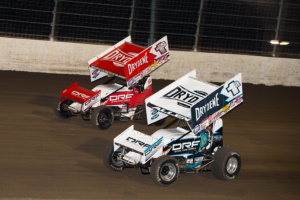 As the laps wound down, Allen began to catch the tail of the field again. He first looked to the outside of Mason Daniel to put him a lap down but lost some speed on the top side, allowing Schuchart to close the gap.

Allen did find his way around on the inside next time around, Schuchart taking the same route with two laps remaining. But by that time, Allen had already widened the gap too far for the Drydene #1s to make up. Smooth and steady out of Turn 4 for the final time, Allen crossed the stripe for his first $10,000 victory.

He knows he’s been through a lot, but he never gave up. Allen’s unshakable determination was even tested at I-80 Speedway just two weekends ago, where he started on the pole and led the first 12 laps, battling with defending champion Brad Sweet before fading back to sixth.

But the one thing that remained with him all this time – his will to win. The never-say-die attitude carried him through the rough defeats of his past.

“Just being so close so many times and not winning… I wouldn’t show it or talk about it, and I always try to be positive. But when I’m chilling in my motorhome or just hanging out, deep down, it definitely bites at you a little bit,” Allen said.

“But you can’t give up. I’m only 26. I have a whole long racing career ahead of me, and I came about this World of Outlaws tour in a very different way. I’m proud of myself, I’m proud of my team and everybody who’s supported me and never given up on me.”

It was all smiles from the runner-up as well in Victory Lane, as Schuchart gave Allen a big hug before his post-race interview. If anyone else there knew how hard Allen has worked to earn his first win, it was him.

“Words can’t describe how happy I am for him,” Schuchart said. “Just the emotions of crossing that finish line and knowing he won. I tried my all to pass him, just like I did at Stockton and any other time he was leading a race. I’m a competitor, that’s what I do. Again, I couldn’t catch him. He was running a great race, a smart race, and I’m just so happy for him and his guys.”

Rounding out the podium with a solid run in the top-five all race was Donny Schatz. The 10-time World of Outlaws champion started third and finished there with a car he said was solid, making up four points on Brad Sweet in the championship standings.

“It was a good race. I thought we were gonna be able to get there, but just couldn’t seem to make anything happen. Some nights are like that, and tonight was one of those,” Schatz said. 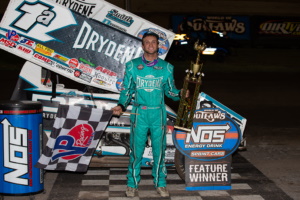