(September 12, 2020) –  Tobias Dauenhauer is living the dream of a NASCAR Whelen Euro Series rookie: the Hendriks Motorsport driver led all laps of the first 2020 EuroNASCAR 2 races at Autodromo di Vallelunga to grab his maiden win in his first ever start in the series. He is also the first German driver to win a race in the official European NASCAR series.

“I’m so happy, I have no words for it,” said the German after climbing out of his #50 Ford Mustang. “Hendriks Motorsport provided me with an awesome car today, it just feels amazing. Thanks to my sponsor RZ Oil Germany to make this possible. Of course my goal is to win the second race too and make the sweep perfect.”

The 22-year-old started from the pole and immediately pulled away while Feed Vict Racing driver Simon Pilate lost two positions after starting alongside the #50 Mustang of Dauenhauer. Vittorio Ghirelli took second position in the first lap, DF1 Racing driver Andreas Jochimsen managed to pass Pilate to settle in third.

Before the EuroNASCAR V8 beasts could cross the start-finish line for the first time in 2020, the safety car was deployed when Pilate’s car ended up facing the wrong way in the last corner of the Vallelunga track.

On the following restart, Dauenhauer had another good jump and Ghirelli defended his second position, while Jochimsen was battling for third with Dylan Derdaele. The Dane got loose and there was contact between the #66 Camaro and the #98 Mustang. Both drivers were forced to retire. Alessandro Brigatti moved up to third and challenged Ghirelli for second, while Dauenhauer led lap after lap.

Another caution was thrown in the closing stages of EuroNASCAR 2 Round 1. Francesco Garisto went off track and got stuck in the gravel, while in the stadium section of the Italian track, Andre Castro and Gasper Dernovsek got together.

While Dauenhauer took the win under yellow, Ghirelli ended up second ahead of Brigatti who grabbed the third podium finish of his career. Alex Ciompi was fourth, beating Nicholas Risitano, who completed the top 5. Kris Richard, who was third in the Rookie Trophy behind Dauenhauer and Ciompi, finished ahead of Giovanni Trione, Vladimiros Tziortzis, Davide Dallara and Max Lanza. The Italian closed the top 10.

Eric Quintal won the Legend Trophy in 12th place, while Julia Landauer grabbed her first win in the Lady Trophy. The American was 11th under the checkered flag, after battling for a spot in the top 10 all race long. Andre Castro drove the fastest lap in the first race securing pole position for EN2 Round 2 ahead of Dauenhauer, who will join the New Yorker on the first row.

The EN2 Round 2 of the Delphix / NSR American Festival of Rome at Autodromo di Vallelunga will broadcast live on 16:55 CEST on EuroNASCAR’s YouTube channel, Facebook page and Twitch profile as well as on Motorsport.tv. 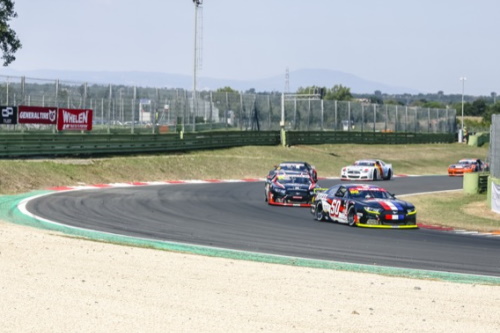