SONOMA, Calif. (Aug. 2, 2015) – Tommy Johnson Jr. was fired up today at the 28th annual NHRA Sonoma Nationals. Johnson, powering the Terry Chandler-sponsored Make-A-Wish Dodge Charger R/T out of the Don Schumacher Racing stable, made his way to the final round for the third time this season and narrowly missed defeating DSR teammate Jack Beckman. With the final round appearance, Johnson moved from sixth in the Funny Car standings all the way up to fourth.

“Some days, you wake up and feel good. That’s what happened this morning,” said Johnson. “I’m happy with the way I drove, and I’m happy with the way the team performed. I had good lights [reaction times] when we needed them, and we ran as well as we could on the track without smoking the tires. The crew chief and I were in sync today, and that usually leads to good things.”

The second round brought Johnson up against DSR teammate Matt Hagan, and again the driver of the Make-A-Wish Dodge did his job at the starting line. His .054 was efficient for the nitro crowd, even beating Hagan’s .065. At the top end, Johnson clocked out with a 4.126, 305.98 to his opponent’s 4.139, 306.53. With a ticket to the semifinals, Johnson arrived for a match with Cruz Pedregon and kept his nose to the grindstone in his John Collins-tuned Dodge. 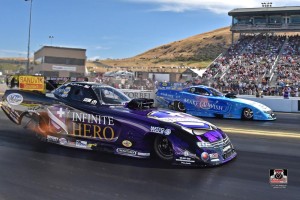 “Anytime you race your teammate, its always tough – especially when he’s leading the points,” said Johnson. “There really were not any easy rounds today. Wilkerson is always tough. Then Hagan, then Cruz. This runner-up was not an easy road. We did not fall into it; we ran really well today and earned that runner-up.

“That’s two final rounds in three races. The Make-A-Wish team is really good, and heading into the last race of the Western Swing [three races in a row out west], I feel like we’re peaking at the right time of the season. We need to carry the momentum as we get closer to the Countdown to the Championship, so it makes me happy knowing our car is running better and better.”

ABOUT MAKE-A-WISH
Make-A-Wish® grants the wishes of children with life-threatening medical conditions to enrich the human experience with hope, strength and joy. According to a 2011 U.S. study of wish impact, most health professionals surveyed believe a wish-come-true can have positive impacts on the health of children. Kids say wishes give them renewed strength to fight their illnesses, and their parents say these experiences help strengthen the entire family. Based in Phoenix, Make-A-Wish is one of the world’s leading children’s charities, serving children in every community in the United States and its territories. With the help of generous donors and more than 27,000 volunteers, Make-A-Wish grants a wish somewhere in the country every 37 minutes. It has granted more than 254,000 wishes since its inception in 1980; more than 14,200 in 2014 alone. Visit Make-A-Wish at wish.org to learn more.