DODGE CITY, KS (September 13, 2020) – Sheldon Haudenschild held a 7.5-second advantage over second place as he crossed the line with five laps remaining. With the wave of the caution flag just two corners later, that gap was erased.

Haudenschild was blistering the World of Outlaws NOS Energy Drink Sprint Car Series field Saturday night around Dodge City Raceway Park when a right-rear tire let go on Tim Kaeding’s #7, bringing out the caution and putting a hungry Parker Price-Miller and David Gravel right behind him for the restart.

Haudenschild stomped on the throttle out of Turn 4 at the drop of the green and began to pull away from the field once again, displaying that speed on the top side of the track he’d shown all race long. Crossing the finish line with a 1.493-second advantage over Price-Miller, Haudenschild scored his fifth win of the season and earned the $10,000 check on the final night of the Boot Hill Showdown. 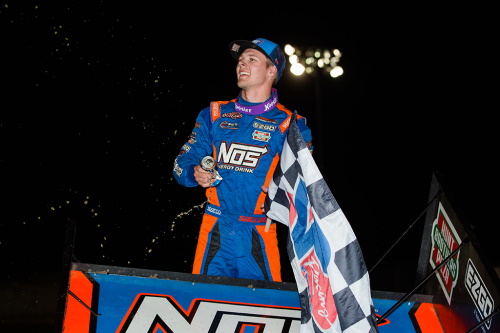 “We qualified a little bit better tonight, and I can’t [stress] how much that means,” Haudenschild said in his post-race interview on DIRTVision. “Gotta start on the front row of them Heats and get in them Dashes. Even after you do that, you’ve gotta draw good for that Dash.”

And draw well he did. Haudenschild pulled the #2 out of the NOS Energy Drink redraw can, setting him up for a runner-up finish in the DIRTVision Fast Pass Dash and a front-row starting spot for the 30-lap NOS Energy Drink Feature.

At the drop of the green, Price-Miller jumped out to the early lead and hit the tail of the field inside the first five laps. Maneuvering around the first two lapped cars with ease, Price-Miller then approached the rear of Bill Rose with Haudenschild now right on his bumper.

Entering Turn 1 on the cushion, Price-Miller took a look underneath Rose at the exit of Turn 2 but lost some speed in the process, opening the door for the Haudenschild on the top. Haudenschild threaded the needle in between Price-Miller and Rose down the backstretch and sailed into the lead entering Turn 3.

“You gotta get through lappers with these guys, and can’t hesitate,” Haudenschild said of his move for the lead in traffic. “Parker was really good, but just one little, not even really mess-up, he just lost his speed there and I was able to go around him.” 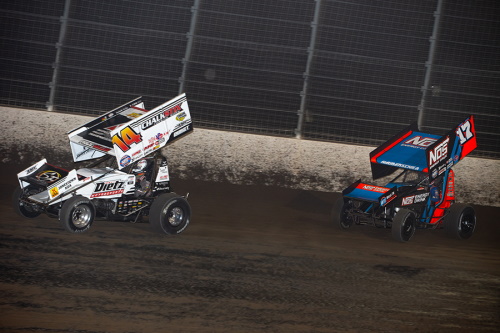 What followed was a powerful display of speed and swiftness in lapped traffic by the NOS Energy Drink #17, similar to his intensity seen in last year’s Ironman 55. By Lap 14, his advantage was at three seconds. Five laps later, a 4.6-second lead. With 10 laps to go, he was 5.5 seconds ahead.

Haudenschild, of Wooster, OH, built-up that big lead right on the top side of the 3/8-mile oval – the preferred groove for many drivers throughout the race. After all, it’s what helped him grab the lead earlier on.

“It was just so slick around the bottom, wasn’t much you could do,” Haudenschild said. “Kinda had to get to the top and wait for them to make a mistake and get through the lappers. That’s what decided this race.”

Even after the caution flag flew in the closing laps, Haudenschild was still able to open a gap back up before the finish. He stuck it right on the top side and got back to work on the restart, leading the field back around to the checkers for his 12th career World of Outlaws Feature win.

Price-Miller held strong inside the top-three all night and brought the Dietz Motorsports #14 home in second. Albeit, he felt he could have been a little smoother with the slower cars. 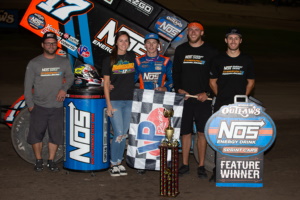 “I feel bad for my guys; I feel like I didn’t do a good enough job in lapped traffic,” Price-Miller said. “I just wasn’t aggressive enough, Sheldon’s really good about being aggressive, being up on the wheel. He just kinda sucked my doors off there.”

David Gravel also had a solid night inside the top-three, keeping pace with Price-Miller throughout the Feature while dicing through traffic on the top. He hung with the leaders for the distance, but just wasn’t able to make the passes he needed at the end.

“Sheldon was the class of the field tonight,” Gravel said. “In open track, me and Parker could keep up. But once we got in lapped traffic, we just got too tight and wasn’t able to compete with him.”

The World of Outlaws NOS Energy Drink Sprint Cars next head to Lawton Speedway in Lawton, OK, for the first time since 1985 on Friday, Sept. 18 and will then return to Devil’s Bowl Speedway in Mesquite, TX, for the $20,000-to-win Texas Outlaw Nationals on Saturday, September 19.

Tickets for the Sept. 18 race at Lawton Speedway can be purchased by clicking here; tickets to the Sept. 19 event at Devil’s Bowl Speedway are available here.

If you can’t make it to the track, you can still watch both races live on DIRTVision. 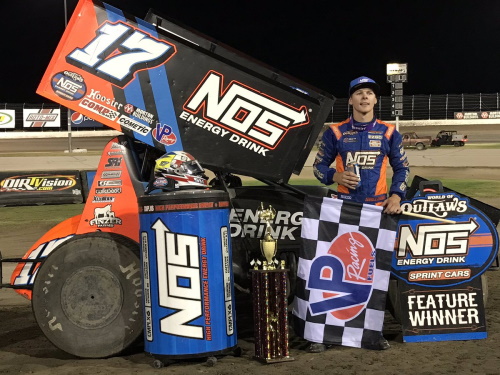