NASCAR GP ITALY
Loris Hezemans picks up the win in a spectacular EuroNASCAR PRO Round 1
The Dutchman prevails in a close four-way battle for the lead,
Jacques Villeneuve leads until technical issue leads to retirement 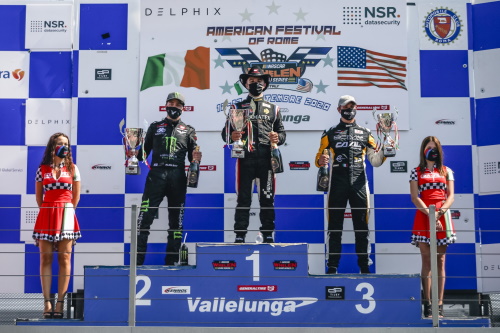 (September 13, 2020) –  At the end of a demanding and dramatic four-way battle for the EuroNASCAR PRO Round 1 win, reigning NWES champion Loris Hezemans climbed on the top step of the podium in Vallelunga, Italy. At the wheel of his #50 Hendriks Motorsport Ford Mustang, the Dutchman beat Alon Day and Gianmarco Ercoli to the line after race leader Jacques Villeneuve had to park his #5 Feed Vict Racing car due to a technical issue. 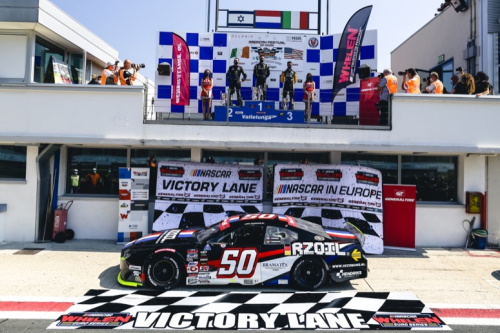 “I think everybody enjoyed that race, but for me it was one of the tougher races to be honest,” said Hezemans, who scored his sixth career win. “We were really struggling with setup issues, but maybe it’s down to me. The car felt very loose and I think we will work a little bit on it before Round 2. I’m really happy but I have to see what happened to Jacques because this race was his to win. I don’t think I had the pace to overtake him, so let’s try to improve in Round 2 and come back stronger.”

Villeneuve, Hezemans, Day, Ercoli and the whole EuroNASCAR PRO field put on a fantastic show in perfect Pure Racing style. The top-4 spent the whole race engaged in a close quarters battle, with Hezemans initially taking the lead after starting from the pole. On lap 5 it was Villeneuve who took advantage of Day’s overtaking attempt on Hezemans to grab the lead. The Canadian brilliantly defended the lead until two laps to go, when issues to his #5 Feed Vict Racing car forced him to retire. 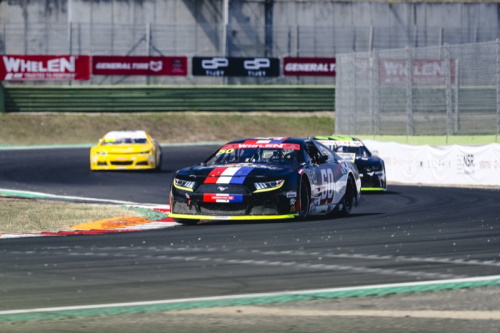 Hezemans inherited the lead and fended off Day and Ercoli to take the checkered flag just ahead of them. The Italian, who scored his fourth career ENPRO podium finish, also grabbed the win in the Junior Trophy since Hezemans’ 2019 NWES title made him ineligible for the 25-and-under classification.

At the wheel of his #33 Tigha Mishumotors EuroNASCAR FJ 2020, Lucas Lasserre was a brilliant fourth after a thrilling battle with PK Carsport’s Stienes Longin and Hendriks Motorsport’s Daniel Rowbottom for the last two spots in the top 5. While Longin finished fifth, Rowbottom was involved in an incident that relegated him to 17th place.

After missing qualifying and starting dead last, EuroNASCAR 2 champion Lasse Soerensen showed what he’s made of by climbing back position after position and finishing sixth. The Dane also posted the fastest lap of the race and will therefore start from the pole in EuroNASCAR PRO Round 2 and was second on the Junior Trophy podium ahead of Giorgio Maggi, who ended up 15th. 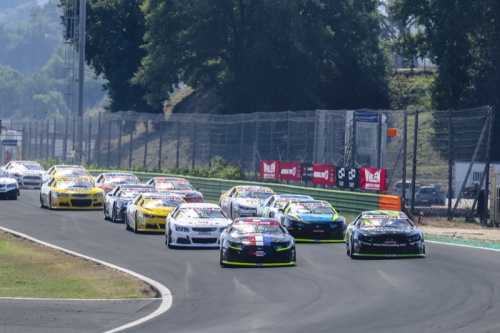 Francesco Sini was a solid seventh on the #12 Solaris Motorsport Camaro ahead of Soerensen’s DF1 Racing teammate Nicolo Rocca and Luigi Ferrara, who brought the first top-10 finish to his brand new team Shadow Racing Cars by 42 Racing.

By rounding out the top-10 in what was his EuroNASCAR PRO debut, Not Only Motorsport’s Davide Dallara also won the Challenger Trophy. Feed Vict Racing’s Dario Caso and Marko Stipp Motorsport’s Yevgen Sokolovskiy finished second and third in the classification dedicated to bronze and silver drivers.

EuroNASCAR PRO Round 2 will be streamed live from 15:30 CEST on the  EuroNASCAR’s YouTube channel, Facebook page and Twitch profile. The race will be also available live on Motorsport.tv and on the SKY platform on the 228 channel MS Motor TV.