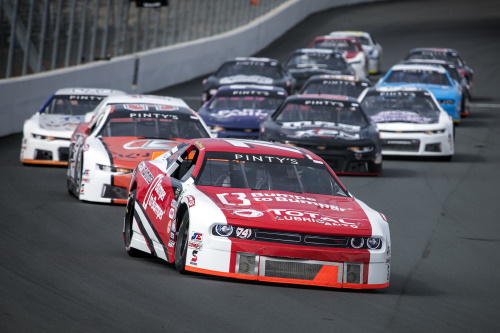 Team Bumper to Bumper was back on the Hagersville oval for the third and final round of the 2020 NASCAR Pinty’s Series season. This track has always been a favorite with Kevin Lacroix, who won his first oval race there.

This win could have been repeated this Saturday as Lacroix, driving #74 Bumper to Bumper / Total / PFC Brakes / Lacroix Tuning , finished in the Top 5 in both 125-lap races.

With NASCAR Pinty’s new way of determining the starting grid, drivers were invited to draw their starting position for the Motomaster 125. Lacroix took the green flag from 3rd place.

From the very first laps, Lacroix made his way up to pole position in no time. However, the team had problems with the car during practice, and the set up that was made for the first race of the evening didn’t pay off; “the car improved a little, but it was slipping from the rear a lot, so the driving was not optimal.”

Nevertheless, he fought his way in the Top 5, finishing second behind his main competitor Jason Hathaway. During the 30-minute break, the team tried to improve the car by making further adjustments in preparation for the Pinty’s 125. Lacroix drew the 8th place on the starting grid of the Pinty’s 125. 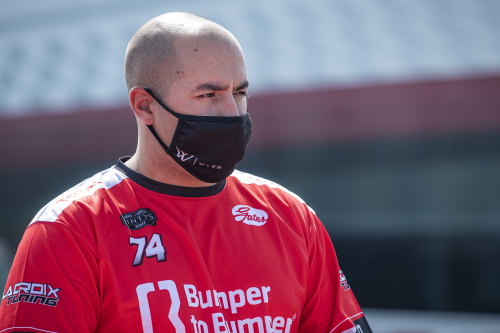 “We made too many changes, and the car didn’t want to turn in the corners anymore,” said Kevin. The second race saw numerous caution flags out, which helped Kevin manage his tires. “On the restarts, I often took the lead, but I didn’t stay there very long because D.J. Kennington and Jason Hathaway were faster than me, they managed to pass me each time. »

This 4th position in the final race of the season gave Kevin Lacroix enough points to finish second in the 2020 Pinty’s Fan Cave mini-series, which included six Ontario events, spread over three weekends.

Overall, Lacroix is pleased with his 2020 NASCAR Pinty’s season; “Obviously we would have liked a full season and to visit Québec tracks, but I feel fortunate to have been able to race this summer. We had a great car throughout the season as I fought my way into the top three in every race. Jason Hathaway kept the momentum from his late 2019 season successes and was able to capitalize on it this summer. Next year he will be the car to beat on oval tracks. »

Team Bumper to Bumper will confirm its return to NASCAR Pinty’s in the coming months. The Motomaster 125 will be broadcast on TSN on September 19 at 11 a.m. while the Pinty’s 125 will air on Sunday, September 27, at 5 p.m.