GAINESVILLE, Fla. (September 18, 2020) – After struggling during the first two races of the 2020 E3 Spark Plugs NHRA Pro Mod Drag Racing Series season, Stevie “Fast” Jackson returned to his world championship form at the U.S. Nationals. With the next stop on the schedule a trip to where he made the quickest pass in NHRA Pro Mod history, Jackson may not be slowing down anytime soon.

Following a victory at the U.S. Nationals, the popular Jackson is ready to pounce at the upcoming AMALIE Motor Oil NHRA Gatornationals, which takes place Sept. 25-27 at the historic Gainesville Raceway. He made an incredible run of 5.643-seconds in the final round in his blown Bahrain 1 Racing Camaro a year ago, setting the national record in the process, which happened to come in a losing effort after Todd Tutterow won on a holeshot. That leaves Jackson, the defending world champ, with a mix of emotions as he heads to Gainesville hoping to finish the job in 2020.

“My goal is not to lose another round of racing this year,” Jackson said. “I think we have a car that can run well in Gainesville and I want a Gatornationals win bad. These fans are passionate. I’ve always ran well there, and it is a special place for me.”

The race, which is presented by FuelTech, is the fourth event of the 2020 E3 Spark Plugs NHRA Pro Mod Drag Racing Series season and will be shown on Fox Sports 2 (FS2). Jackson is the most recent winner in the talent-filled class, finally getting everything to come together at the U.S. Nationals. That it came after he crashed his Camaro in testing the week before simply made the win that much sweeter.

It vaulted him into the points lead, giving him a slim three-point advantage over Jonathan Gray, who also has a race win in 2020. The likes of Kris Thorne and Chad Green, another race winner this season, Mike Janis and Jason Scruggs are also within striking distance, but Jackson is solely concerned with making sure his program is clicking. When it is, he’s proven to be difficult to beat in recent seasons. 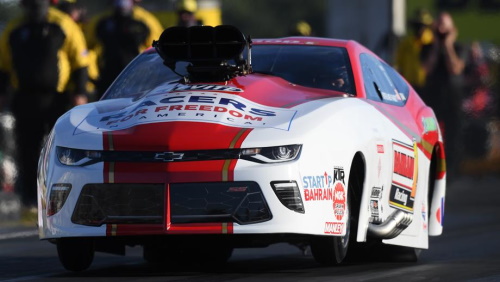 “I got my mojo back in Indy and drag racing, like all sports, is a momentum-driven sport,” said Jackson, who has five wins in the last 14 Pro Mod races. “You need to have momentum when it comes to crunch time, and my team is fired up and ready to race for a championship. I was pretty bummed after the first two Indy races, but we bounced back with a strong showing and I drove like I needed to.”

The trip to Gainesville is special for Jackson in a number of ways. A lifelong Georgia Bulldogs fan, he joked it’s an opportunity to have success in Florida Gator territory, but he’s always enjoyed putting on a show at the historic facility. The traditional NHRA Pro Mod season opener was pushed back six months, but Jackson believes it’s only built up excitement among the fans as the Gatornationals take place in September for the first time ever.

“What has blown my mind is the fans’ thirst for the sport in a year like this,” Jackson said. “They’ve just been so excited to see us compete this year and that means a lot. When you add the glory and the passion of the Gatornationals, it just adds to it. The fans at this race have a hunger and passion for the sport and Pro Mod racing, and I’m proud to be a part of this class.”

FuelTech is the presenting sponsor for the E3 Spark Plugs NHRA Pro Mod Drag Racing Series race, as the class holds its first race outside of Indianapolis in an unprecedented 2020 season. Considered an industry leader, FuelTech has specialized in developing and manufacturing state-of-the-art performance engine management systems since 2003, becoming a product of choice for many of the top NHRA Pro Mod drivers.

Additional class sponsors for the stop in Gainesville include Brampton Pallet Management and Jay Santos of Ontario, Canada, who are supporters of Pro Mod racing in the U.S. and Canada, as well as T&E Auto Haulers, which is celebrating 40 years of making all-aluminum trailers for professional and sportsman racers, and Arrow Components of Minnesota, which has produced high-quality trailer accessories like awnings, cabinets, carts and benches for 25 years.

A limited number of tickets are on sale now for AMALIE Motor Oil NHRA Gatornationals. Tickets may be purchased by visiting NHRA.com or calling 800-884-NHRA.