AUSTIN, Texas (September 19, 2020) – Blackdog Speed Shop’s Michael Cooper continued his winning ways in the Pirelli GT4 America Sprint Championship on Friday with a coast-to-coast victory in the first of three races at Circuit of The Americas.

Cooper qualified the No. 10 Blackdog Speed Shop McLaren 570S GT4 on pole Friday morning and went on to his ninth victory of the season. He also won for the eighth time in his last nine starts, and the No. 10 McLaren won at COTA for the second time this year. 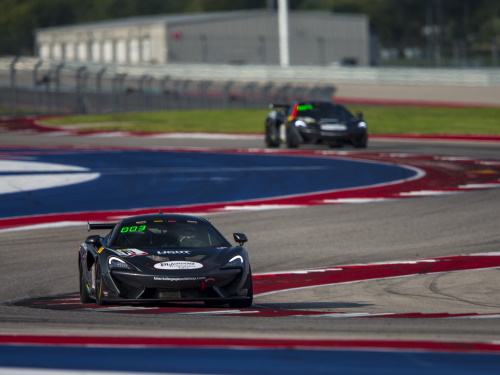 On the other end of the spectrum, teammate Tony Gaples had hoped to continue his podium streak in the No. 11 Blackdog Speed Shop McLaren. However, contact on the opening-lap caused significant damage to Gaples’ car and he retired from the race after four laps.

Cooper’s victory inched him closer to his fourth SRO/World Challenge Drivers Championship. He’ll enter Saturday’s second race of the weekend with a 65-point lead, and another victory would unofficially clinch the GT4 Pro title.

Friday’s race was another clinic with Cooper jumping out ahead early and managing the tires on the No. 10 McLaren. Along the way, he set the fastest lap of the race and will start from pole for Saturday’s 4:10 p.m. CT green flag.

That race and Sunday’s 9 a.m. CT event will stream live on gt4-america.com with television coverage on CBS Sports Network set for 8:30 p.m. ET on Thursday, Sept. 24. 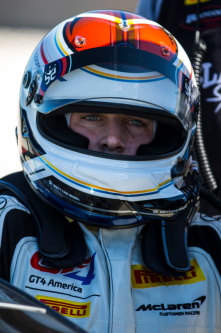 MICHAEL COOPER, NO. 10 BLACKDOG SPEED SHOP McLAREN 570S GT4: “There wasn’t much let-up at all today. Drew was right up behind me all day up until that last lap. I was really pushing to stay ahead, and the tires were going off a little bit. I really had to manage those and was lucky to come out ahead today. Tomorrow may be a little different if it’s cooler. You can push a little bit more and keep the tire under you a little better. Generally that suits the other guys a little more. We’ll go back tonight and work on this McLaren a little bit for tomorrow. The Blackdog Speed Shop guys are always great at that, so we’ll try to do this all again tomorrow.” 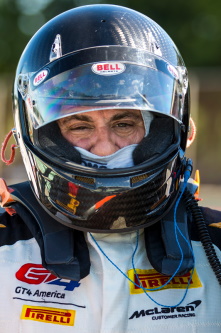 TONY GAPLES, NO. 11 BLACKDOG SPEED SHOP McLAREN 570S GT4: “That obviously wasn’t what we had in mind for today. The start was pretty chaotic up the hill into the first corner, and a lot of us were jumbled together. I was looking to make up some ground, went in deep on the brakes into Turn 12 but there was absolutely no grip down there. It was an accident, pure and simple. I hate that it impacted someone else’s race. All I can do is apologize, go out tomorrow and have a better run.”