GAINESVILLE, Fla. (September 19, 2020) – As a five-time number one qualifier and previous winner of the Gatornationals, Cruz Pedregon and team are headed to Florida with their sights set on a strong showing. The Snap-on Dodge® will be decked out in its Snap-on 100th scheme, that was recently featured on a magazine cover, while a new body and paint scheme are being prepped for October.

In the magazine’s article, Cruz says, “I feel like we’re on the brink of breaking out of the rebuilding mode that I’ve been in for several years now.” He shares that he’s got one of the most solid teams he’s had in a decade and feels like the team “stacks up well” in facing the competition.

Working with Nick (Casertano) and Eric (Lane), Cruz says he, the team and the Snap-on Funny Car are ready to take on the rest of what’s been a challenging year for drivers, teams and fans.

“When you’ve got good people on your side, you know those incremental improvements you make each race are the result of their hard work under circumstances none of us could have imagined,” he says. He adds that he’s grateful to the sponsors, his team members and fans for continuing to make the sport of drag racing one of the best to be a part of saying, “We still have our eyes on winning and love having the fans along with us on TV, online and in the stands for the ride.”

While Cruz’s Dodge® is still sporting the Snap-on 100th paint scheme, he’s hoping fans will take and post pictures of the car with the hashtag #Snapon100. 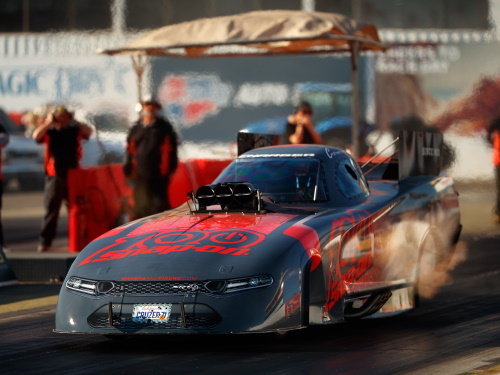