The hunger for a win had been turning in his stomach for the past two months.

Since claiming the trophy at the Terre Haute Action Track in mid-July, Schuchart went on a run of 18 top-10 finishes in a row, including four runner-up finishes, but no wins. 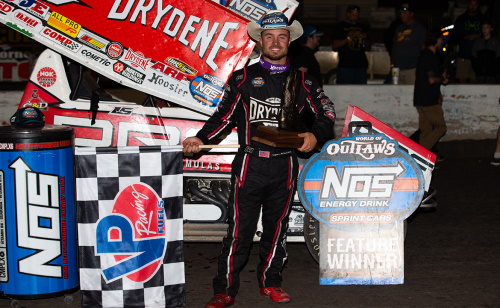 When the opportunity to visit Victory Lane for the second year in a row at Devil’s Bowl – the birthplace of the World of Outlaws NOS Energy Drink Sprint Car Series – presented itself, Schuchart made the most of it. He maneuvered his way past the likes of Jason Sides, Jacob Allen, Sheldon Haudenschild and David Gravel to go from fifth to the lead by the halfway point of the 30-lap Feature and then went on to claim the $20,000 win.

“We’ve had a lot of seconds and thirds in the last two months,” said Schuchart, of Hanover, PA. “Some really good races. Ran up front with big names and with great teams. There’s a lot of great teams out here that are tough to beat but this Drydene Performance Products race team is going to keep working hard and do the best we can to get this thing in the winner’s circle.

“Just happy to see these guys’ hard work – Ron Helmick, Ben Witman, Tyler Garber, Brendan Collum, Bill (Klingbeil), my grandfather (Bobby Allen), Michael Newman, everybody that is a part of this team – to just get this thing were it needs to be and see their hard work pay off and get this thing back in victory lane where it belongs.”

The victory was his sixth of the season and 22nd of his World of Outlaws career. It also helped him close back in on the championship lead. He now trails points leader Brad Sweet, who finished fourth, by eight points with 12 races remaining. 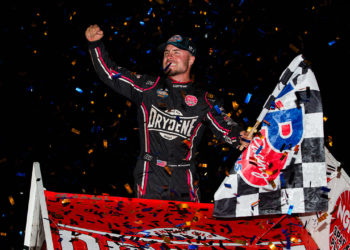 Before Schuchart galloped his Drydene sponsored horse through the field, Gravel and Haudenschild entered the Feature as the early favorites. Gravel set Quick Time for the fifth time this year – tying him with Sweet and Kyle Larson for the most Quick Time awards this season – won his Drydene Heat Race and then the DIRTVision Fast Pass Dash.

However, his Dash win came with a bit of luck. Gravel and Haudenschild crossed the finish line at a dead tie – 0.000. Since Gravel led the lap prior, he was awarded the victory.

Like Schuchart, Gravel has craved a return to Victory Lane. His last win came at Knoxville Raceway about a month ago. He earned seven top-five finishes in the nine races after and had been a contender to win in several of them. He felt Saturday night at Devil’s Bowl could finally result in another trophy.

He rocketed ahead of the field in the early stage of the Feature, leaving little hope for second-place Haudenschild to get as close to him as he did during the Dash.

While he led, Schuchart did his dance through the field. He was in fourth by Lap 3. Third by Lap 8. And second by Lap 9. Five laps later he could sense the blood in the water. Gravel was in sight and in striking distance. 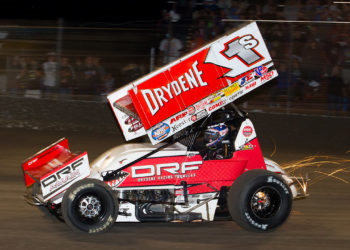 As the pair exited Turn 2, they had to split the lap car of rookie Mason Daniel, who ran the middle lane through the corner. Gravel chose to go high and Schuchart went low. The Pennsylvania driver’s choice proved to be most beneficial. Gravel was left little room between he, Daniel, and the edge of the track, forcing him to back off the throttle, while Schuchart was left an open door to jolt by them both.

That split second opportunity was all he needed to accomplish his quest of obtaining another victory. Gravel attempted to run him down in the closing laps, keeping him within reach but a caution with three laps to go allowed Schuchart to restart in clear and cruise to the win.

“We had a good enough car to win,” said Gravel, of Watertown, CT. “I’m really bummed for my guys and all our sponsors here tonight. Sometimes it’s better running second there. Mason Daniel has been hard to lap all season and he decides to miss the bottom and give Logan the bottom. It is what it is. We’ll take second and move on.”

He’s on a streak of 26 top-10 finishes in a row, which has helped keep Jason Johnson Racing in the hunt for the team championship. They are currently tied with Schuchart’s Shark Racing team for second in points – 8 points behind Kasey Kahne Racing.

Haudenschild rounded out the podium with his third-place finish, continuing to be one of the best cars on the tour at the moment. He’s collected 12 top-10 finishes in his last 16 races – five of them being wins. He’s now only 14 points behind 10-time Series champion Donny Schatz for third in the driver points.

“The car was good,” said Haudenschild, of Wooster, OH. “Logan (Schuchart) getting by me was a big move. I think we could have kept up with the 41 (of Gravel), but, man, it was a tough track. I feel like in traffic we could have had a shot. We all got bunched up there. We’ll take a third and keep pushing here.”

The World of Outlaws NOS Energy Drink Sprint Car Series returns to Plymouth Speedway in Plymouth, IN on Thurs., Sept. 24. Get tickets by clicking here. 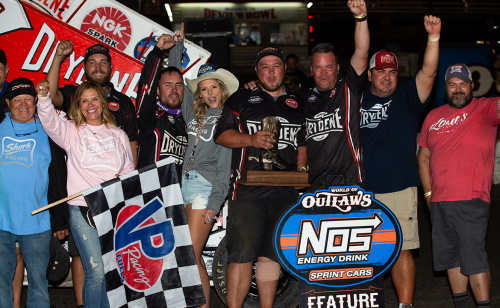