Austin, TX (September 20, 2020) – This past weekend was a roller coaster for ST Racing as they competed in Rounds 12-13 of the Pirelli GT4 America SprintX Championship at COTA. This double-header event was all about regaining their lead in the Championship, but fate decided otherwise. And, after getting through some rough moments, the Team scored a win with driving-duo Nick Wittmer and Harry Gottsacker.

The weekend started off really well with Samantha Tan and co-driver Jon Miller clocking the fastest time (2:17.411) overall in the #38 BMW M4 GT4 during the very first practice on Thursday morning. Later that afternoon during qualifying, their ST Racing teammates Nick Wittmer and Harry Gottsacker also put down some fast laps with Wittmer claiming Pole position at 2:17.022, and Miller/Tan coming in second.

On Friday, the grid for the first race of the weekend was “picture-perfect” with both ST Racing BMW’s sitting on the front row. Polesitter Nick Wittmer and teammate Jon Miller took the green flag at 11:00 am under warm sunny skies. It was a busy but clean start, until the end of the first lap when a full-course caution was brought out to remove car #19, stopped on track. 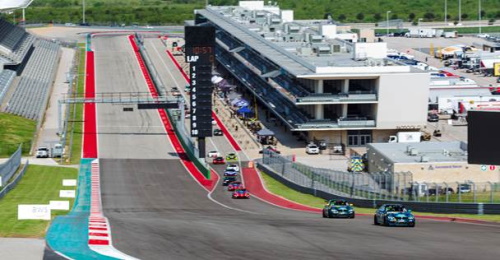 On the re-start, Wittmer’s #28 machine kept the lead, while two cars passed Miller at Turn 11 relegating him to 4th place overall. A few laps later, another caution flag came out delaying the pit window. With 25 minutes remaining, the pits opened, and Wittmer came in for the required driver change. His co-driver Harry Gottsacker got behind the wheel of the #28 BMW and was eager to get that lead. However, the Series officials ruled a pitlane violation and with just a few laps before the end, Gottsacker was told to come into the pits and do a “stop & hold” for 3 secs. By the time he rejoined the race, too many positions were lost and there just wasn’t enough time to move back up the field. The best he could do was move up to 15th overall, 5th in class.

When Miller handed the car to Samantha Tan, she jumped into the #38 BMW M4 GT4 for her stint, and was having a great battle for 3rd in class with the #26 car of Toby Grahovec when the #71 KTM XBOW (who was one lap down), pushed her on the outside of Turn 9 and made her lose two positions.

“I was looking to set up for a pass on the Classic car (Grahovec) under braking, after the back straight, but that wasn’t possible after the KTM car got by” said Tan. “The race today wasn’t optimal” she added. “The two yellow flags during Jon’s stint essentially eliminated the gap he had from the pack. By the time I got into the car, the tires were not great, and the setup change we made resulted in a bit too much understeer/snap oversteer. We finished 4th in class today. It was a bit frustrating, but we got some points, and we’re potentially 3rd in the championship right now. Tomorrow, we’ll have sticker tires, and I’m definitely looking for some redemption.”

Despite the rough day, Jon Miller was happy to come away with 4th in Silver class, and earn some points for the championship.

“Today was tough” he said. “We had good pace all weekend, but we tried a setup change pre-race that clearly didn’t work. We also found something mechanical that will be fixed and get us back in the fight for a win tomorrow.”

Wittmer’s words were few after the race. “The car was perfect and we had this win. Now that we are 9 points behind first place in the championship, we have to work harder. Hopefully, this won’t happen again.”

Gottsacker added, “Nick did an awesome job today and led much of the race from pole position. Unfortunately, we had a pitstop penalty for a short pitstop that cost us a podium finish and the championship lead. We should have a great car for tomorrow’s race and make up some points. We’re not giving up. We’re going for it.”

Saturday was a whole new day for everyone at ST Racing. Samantha Tan and Harry Gottsacker started the race determined to charge ahead and gain some ground in the championship points. Tan saw her times improve with every lap, and kept up with the pack while Gottsacker drove solidly cutting through the field. By Lap 4, the young Texan was running 1st in class and held on to that throughout his stint. When co-driver Nick Wittmer took over the #28 GPI Biotech machine, he had one goal in mind, and that was to finish in front of his rival Jarrett Andretti, who was leading the Silver Division by 9 points. On Lap 16, after a phenomenal battle with Andretti, Wittmer passed him for the lead in Class, and never looked back. He charged ahead, picking cars off one by one, and crossed the finish line 2nd overall while claiming the Silver Class victory. Andretti was just one step below on the podium.

Wittmer was elated after the race. “What an awesome race! The team gave me a perfect car all weekend. I only had 2 laps in the car, before I went into qualifying and got the pole. I was feeling down after yesterday’s race, but I turned it around today, and once I passed the Andretti car, I tried to go for overall win. Made it up to 2nd overall, but on the last lap, I took it easy to make sure we kept our 1st place in Class. I think we’re 2 points behind the leader now, going into Indy, and it’s pretty much going to be a championship race, there. Whoever finishes out front will win the Championship.”

Harry Gottsacker added: “It feels great to get some redemption after yesterday’s great run was spoiled. The team gave us a great car and we kept the lead in the Silver Class. And, we had some fun with the Pro-Am leaders. Nick did what Nick does, and made some amazing passes to fight for a win in Class. We’re only a few points back in the Championship now, and we’ll be ready for Indianapolis.”

Meanwhile, Samantha Tan’s partner Jon Miller showed some great speed during his stint. However, he had contact with the KTM car while trying to overtake him, and his #38 BMW machine suffered damage to the left front control arm. Miller managed to limp back to pits and with the precious help of a BMW technician (Joe), Miller was able to rejoin the field, record the Fastest Lap and finish 6th in Class just before the race ended.

For the ST Racing team, giving up was never an option.

“During that battle for a trophy” said Miller, “I caught the KTM in Turn 6, and went side-by-side when he floated wide on the entry. When we got to the apex, there was wheel-to-wheel contact, and I could tell that something was bent immediately. The car was still drivable, so I pushed on, but four laps later, the ball joint broke coming thru Turn 19. I dove into pitlane and the crew flew into action. I thought we were done but nobody on the crew felt that way. I was disappointed but so pumped up that I was able to go back out and set the fastest lap. Today was all about the ST Racing crew. They must have been inspired by the 24H of Le Mans (happening this weekend) because they fixed a broken ball joint in record time.”

Miller added: “All credit to Samantha too, after a chaotic start. She stayed right on the tail of the KTM and Classic BMW in our Class, giving me a great chance to fight with them for a podium.”

Samantha Tan’s post-race comments sort of described what the whole weekend had been like. “Today was bittersweet” she said. “We definitely had a podium car and I had a great stint, keeping up with the pack. Unfortunately, due to some contact, the left front control arm broke, and Jon had to come in because the wheel was basically stuck in the wheel well. We thought we might have to park the car, but Joe (BMW) was amazing and fixed the issue within three laps, and Jon was able to get back out with 3 minutes to go.” 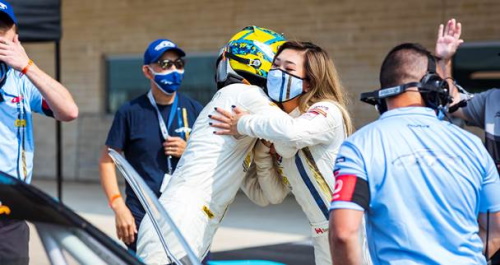 Samantha Tan congratulating Nick Wittmer at the end of the race

“Our sister car with Nick and Harry finished P1 in class and P2 overall. I’m super happy for them” said Tan, “and even more motivated to do well at Indianapolis.”

Again, the team really appreciated the assistance of BMW technicians who are part of the BMW STEP GROUP program and make such a difference at every race event.

The ST Racing Team is already looking forward to the next and final races of the season at the Indianapolis Motor Speedway, on Oct 1-3 where they hope to clinch the Championship.

ST Racing will also compete in the 8-Hour race on Sunday, Oct. 3rd.