AUSTIN, Texas (September 22, 2020) – Returning to the site of their first wins of 2020, Copeland Motorsports drivers Tyler Maxson and Tyler Gonzalez continued to add to the team’s resume. Competing at the Circuit of the Americas this past weekend in Austin, Texas, Maxson garnered wins number eleven and twelve of the season en route to claiming the TCR Championship while Gonzalez grabbed three podium results to keep his championship hopes alive. 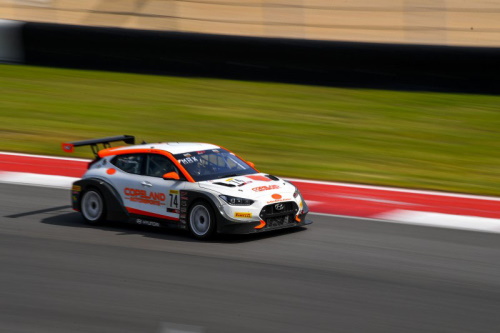 “We never give up and keep pushing until the end despite what is thrown at us,” explained Dean Copeland. “The Tyler duo had another terrific weekend for the team and managed to bring home five podium results and six top-five finishes. Tyler Maxson was able to secure the TCR championship, adding to his TCA title from 2019 while Tyler Gonzalez did what he needed to do to try and keep his title hopes alive.”

Disaster would almost strike before Saturday’s race as the Hyundai Veloster N TCR of Maxson would not fire on the grid. Late to enter the track and forced to start from the tail of the field, Maxson took it all in stride driving forward to claim his twelfth win of the season, despite only being the fifth fastest car on track. Starting fifth on Sunday’s final race of the weekend, Maxson added another top-five result and managed to garner enough points to claim the TCR Championship for Copeland Motorsports with one event weekend remaining. 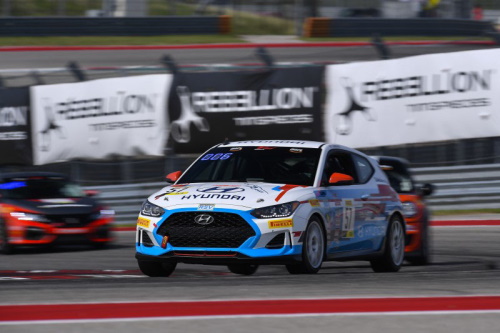 Competing in the TCA division, Tyler Gonzalez improved his finishing position from his starting position in all three races on the weekend. Failing to turn a lap in qualifying on Friday and forced to start ninth on the grid, Gonzalez gained seven positions when wheel-to-wheel racing commenced driving from ninth to second.

Race two on Saturday saw another two-position gain for Gonzalez as his outside row two starting position earned him a second-place podium result and another trip back to the Circuit of the Americas podium. Following suit again in the third race of the weekend, Gonzalez finished third, his third podium result of the weekend.

Copeland continued, “We have one more event at the Indianapolis Motor Speedway in two weeks and more chances to put Hyundai and Copeland Motorsports on the top of the podium.”