LEXINGTON, Ohio (September 22, 2020) – Teams in the Global Mazda MX-5 Cup presented by BFGoodrich® Tires are experiencing some déjà vu as the series heads right back to Mid-Ohio Sports Car Course this weekend, the same track where the series was in action just two weeks ago.

COVID-related schedule changes created the opportunity to visit the Ohio circuit twice; first with the NTT IndyCar Series and now with the IMSA WeatherTech SportsCar Championship. 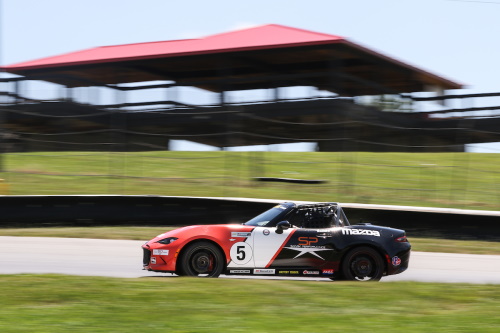 MX-5 Cup drivers seem to have an affinity for last-lap passes at Mid-Ohio. In 2018 and 2019, both races at Mid-Ohio were won with a pass after the white flag.

“If we keep working for podiums, the points will come with it,” said Noaker. “It’s way too early to worry about one single driver at this point in time. We made up over 30 points this same race last year, so I’ve learned not to count anybody out.”

Mid-Ohio is a special place for Noaker. His 2018 victory set the Guinness World Record for youngest person (14 years, 178 days) to win an IndyCar-sanctioned race. While the return to the same track might remind some of a clip from Groundhog Day, the double header event is anticipated to be even more competitive in the return race weekend. 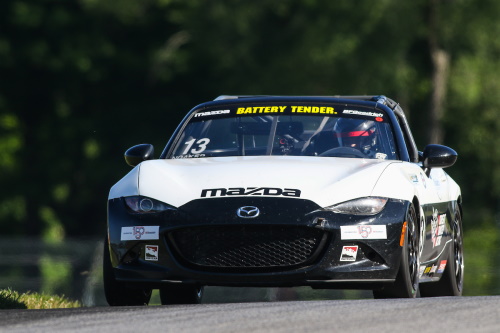 “I believe IMSA’s Michelin rubber being put down will have more people running upfront,” Noaker said of the 2.258-mile track that is notoriously difficult to find grip on. “With people having a full race weekend already at Mid-Ohio, setups will be a little more dialed in.”

Trailing Noaker by 14 championship points is Carter, the 2019 Global Mazda MX-5 Cup Rookie of the Year. After finally capturing his first win two weeks ago, Carter thinks more are inevitable.

“Now that I have a win under my belt, I feel confident about getting out there and bringing home more checkered flags,” Carter said. “In every series, it takes some time to settle into the car and start winning. But now that I’ve jumped that hurdle it feels like the flood gates will open up and the wins will keep coming. It feels great to have the pressure of getting my first win in the Global Mazda MX-5 Cup off my shoulders and I’m proud of what the Carter Racing Enterprises team has accomplished so far this season.” 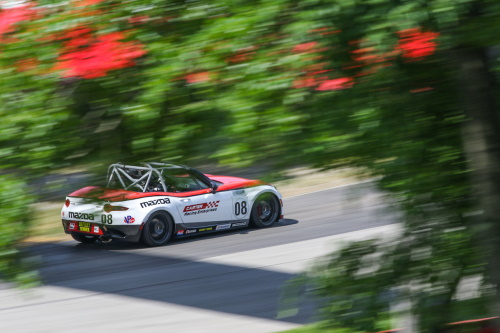 His teammate, Jared Thomas (No. 96 Carter Racing Enterprises), leads the 2020 Rookie of the Year standings and is the current recipient of the Mazda Road to 24 Scholarship. Thomas scored a runner-up finish in his MX-5 Cup debut at Road America, but has struggled to find similar results since.

Race One at Mid-Ohio is slated for 4:05pm ET on Friday, September 25, and Race Two will take place Saturday, September 26, at 1:05pm ET. Live timing and radio will be available at www.mx-5cup.com.