AUSTIN, Texas (September 22, 2020) – CrowdStrike Racing came away with another weekend of strong performances as SRO Motorsports America made its second visit of the season to Circuit of The Americas. With momentum clearly in-hand, the program turns its focus to closing out the season in championship form at the historic Indianapolis Motor Speedway.

CrowdStrike Racing drivers Kevin Boehm and CJ Moses turned heads with their performances in the TC America category at COTA with each establishing significant momentum ahead of the Indianapolis finale.

The duo of George Kurtz and Colin Braun will look to make their return to GT World Challenge America powered by AWS competition in the No. 04 CrowdStrike/AWS/DXDT Mercedes-AMG GT3. The car was withdrawn from the COTA weekend Saturday due to an unforeseen family emergency but will return for the Oct. 2-4 Indianapolis weekend, which will run in conjunction with the Intercontinental GT Challenge’s eight-hour race.

One of the biggest stories of the weekend was the performance of CrowdStrike’s Boehm, who surged into the TCA Drivers Championship lead with a stellar showing at COTA. 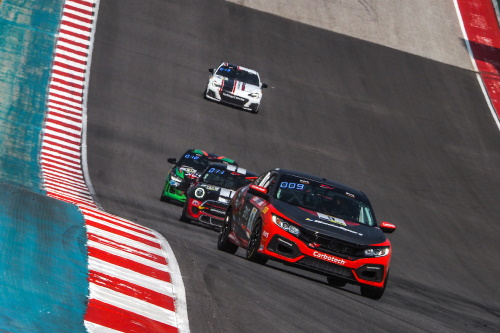 Piloting the No. 9 CrowdStrike/AWS/DXDT Honda Performance Development (HPD) Civic Si, Boehm won twice at COTA to go along with a three-race sweep at Road America. He arrived in Austin three points out of the championship lead but unofficially is 32 points in front headed to Indianapolis.

Boehm had the dominant TCA car all weekend. He set the fastest time in Friday’s qualifying session and began out front in each 40-minute Touring Car race. Boehm led by more than seven seconds after the first eight minutes, won by 12.705 seconds and set the fastest lap in class. 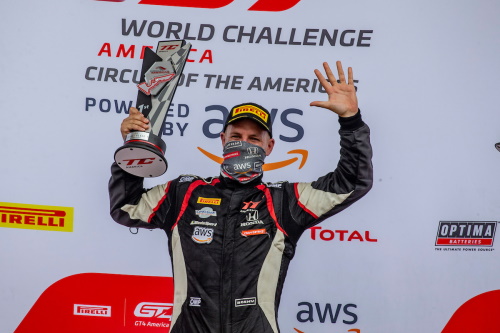 It was more of the same Saturday as he raced out to another lead in the opening 20 minutes and again set the fastest lap of the race. He ended the weekend with a hard-fought, fourth-place finish.

“I’m really trying to take things one race at a time, and that’s what we’ve been doing all year,” said Boehm. “We’re still new to this series and the car is still new to us. I’m amazed at how much we’ve learned since we were here in March. To come back here and to get the results we did is pretty memorable. Everything has come together really well. We have the CrowdStrike/AWS/DXDT HPD Civic Si in a great spot heading into Indianapolis. It may have looked easy this weekend, but believe me, it wasn’t!” 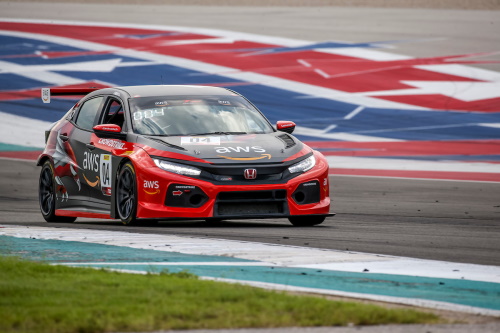 Moses did well to finish seventh Friday as the Touring Car field made an early jump on the start and was quickly among the TCR pack despite separate class starts. Moses fell back to 15th but made his way back through the TC cars by the halfway point and finished seventh.

Saturday was a little more routine, but Moses hit on something with his driving in looking ahead to Sunday. That premonition came to reality in the weekend finale. Moses picked up a spot at the start to fifth and proceeded to set his best lap times of the weekend. In fact, he went toe-to-toe with provisional class champion Tyler Maxson late in the race and finished ahead in fourth place to close out the weekend. 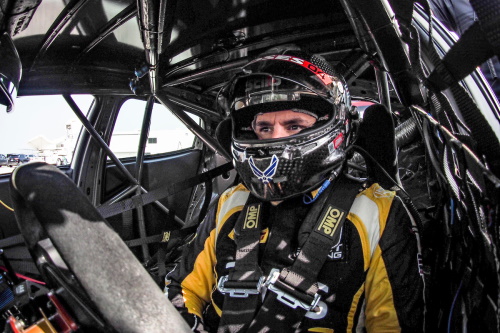 “I feel like we came a long way since Friday,” Moses said. “Taking things lap by lap was the key early in the weekend, especially with what happened Friday at the start. I kept feeling more and more comfortable with each lap. By Sunday, I had a level of confidence that I hadn’t felt so far this season. It’s a very satisfying way to close the weekend as we look ahead to Indianapolis.”

As was the case at Sonoma Raceway and Road America – the most recent events in GT World Challenge America powered by AWS – crowdstrikeracing.com offered fans exclusive live streams of both 90-minute races at Circuit of The Americas.

Specialized play-by-play commentary with insight from Boehm’s and Moses’ perspectives as a racer and engineer combined with advanced data display using P1Software and tools from Amazon gave viewers the most complete analysis of GT World Challenge competition.

In addition, CrowdStrike continued its support of SRO America and its competitors in awarding the CrowdStrike Fastest Lap honors at the end of each race for GT World Challenge America, Pirelli GT4 America Sprint and SprintX, and TC America. At season’s end, the driver with the greatest number of fastest race laps will receive a year-end reward package from CrowdStrike.

Boehm also shared more of his winning success at COTA with his teammates at Operation Motorsport. The organization seeks to place retired or injured service members within teams during the weekend. It is one of many ways CrowdStrike supports and lifts up those who have sacrificed by their military service.

At Circuit of the Americas, Staff Sgt. William Babineau (Ret.) – an Operation Motorsport team member – was part of Boehm’s victorious effort and will be with the Boehm Racing team again at Indianapolis.

He is one of the many veterans whom Operation Motorsport has helped transition into new careers following their military service. Operation Motorsport is a veteran-led and operated, not-for-profit (US 501(c)(3)) that serves American & Canadian service members and veterans, and was founded on the basis of three simple words: Excite, Engage and Empower.

The GT World Challenge Powered by AWS and TC America will wrap up their seasons at Indianapolis Motor Speedway along with the Intercontinental GT Challenge from October 1-4. For more information on the series and for the livestreamed races, visit the new crowdstrikeracing.com.