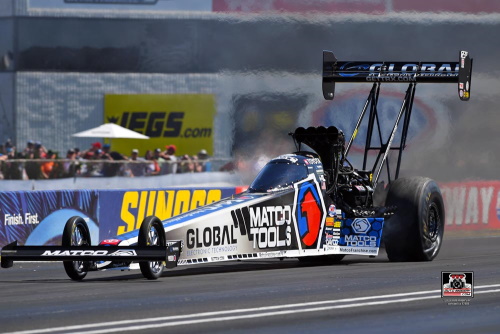 Quotable:
“I’m looking forward to going to Gainesville. It’s always been a track that’s special to me. I remember it like it was just yesterday, back in 1998 when I started my NHRA career on a Pro Stock Motorcycle in Gainesville.

“This race brings a lot of light to our series right now to be able to leave Indy and continue our stretch to race for a championship. With this being the start of us going on the road, I’m very pumped up, very amped, and am looking forward to making some special things happen with our Matco Tools/Global Electronic Technology/Toyota/Hangsterfer’s dragster, and I can’t wait to get to the Gators.” 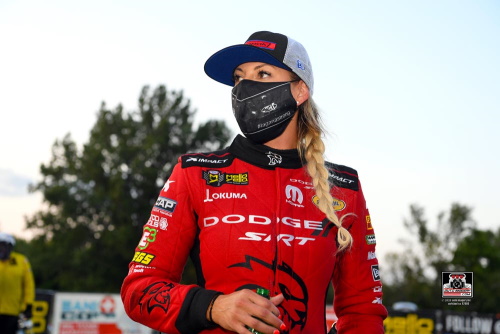 Quotable:
“Indy is great, and we’re all very fortunate to have been able to run there as many times as we did, but the essence of traveling and seeing our various fan groups across the country is something I’ve truly missed. We traditionally have not had a great deal of racing success at the Gatornationals, which brings me to my favorite overall Gainesville memory – setting the stock Dodge Demon record on a cool late evening with the talented SRT team back in 2017. Now that we are continuing to adorn the Hellcat Redeye livery at the Gatornationals, I hope to create our very best memory there yet, by putting the themed dragster of Dodge’s most currently available, highest horsepower factory-produced car, the Hellcat Redeye, in the winner’s circle. Something I feel we are outrageously close to doing.

“The championship math is simple. We are basically in what some would call ‘Countdown weather,’ without a Countdown. We are aware of our position, two-and-a-half rounds (50 points) behind Doug (Kalitta) and with Steve Torrence half of a round (10 points) behind us, but that is not our focus. They, and the other strong competitors, are not our focus. Qualifying low, heightening our adaptability and staying focused on our hot rod is what we believe will yield us the results we want.” 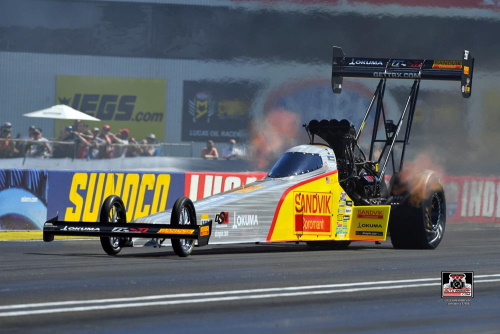 Quotable:
“I am absolutely looking forward to a race outside of Indy. I’m ready to see our Florida fans, it’s been so long. Just like at Indy, (crew chief) Mike Green and I have had incredible success in Gainesville. As our new team starts to jell, we should get better week after week. Plus, I really love the Gainesville track.” 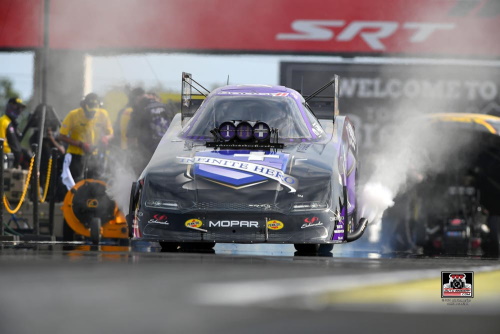 Quotable:
“I love Indy, but it’s going to be fun to go to a different venue and I fully expect to see fans foaming at the mouth for drag racing. The fans in this area have been clamoring for this since March, so it’s going to be a lot of fun. You want to win every race you go to and it would be great to give Don Schumacher a 10th straight Funny Car victory. We lost the points lead for a race, so it felt good to come back and vindicate ourselves at the U.S. Nationals, and we’ll try to extend it in Gainesville.” 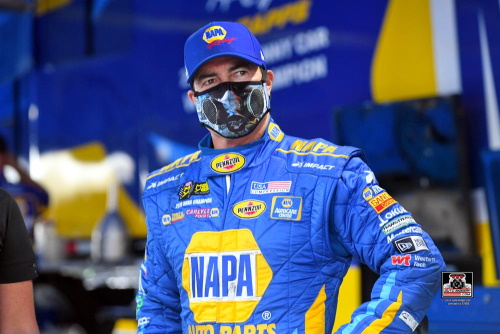 Quotable:
“There’s always a lot of hoopla surrounding the Gatornationals every year. It’s one of the biggest races on the NHRA circuit, it holds a lot of prestige and history. But this year, 2020, it’s extra special because it’s the first track that we’ll be going to outside of Indianapolis since the pandemic shutdown. Gainesville was the first race that all of us racers hoped would make the cut to get back on the revised NHRA schedule after it was originally postponed.

“The Gatornationals is one of those races where you want to make sure you get a win at least once in your career. I’ve been lucky enough to win at Gainesville, but this year, the way the season has transpired with just five races to go, it seems like we’re in the Countdown. It feels like a sprint to the end, and I couldn’t think of a better race, or a better track to go to than Gainesville to try and get a start on winning the 2020 Funny Car championship. I love the mentality that (crew chief) Rahn Tobler and our team have had at the last few races at Indy. He’s been very aggressive and trying to steal every point we can, and we’re going to try and continue to do that this weekend.” 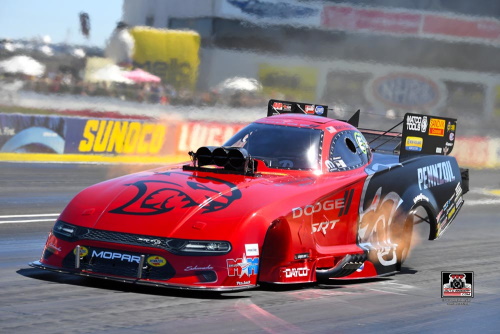 Quotable:
“I have never won Gainesville. I’ve been to the final there, Jack Beckman beat me in 2018, so I really want to put a Gainesville Wally (trophy) on the shelf. We definitely have the car to do that this year. Our Dodge Hellcat Redeye is really responding well to the adjustments (crew chief) Dickie Venables has been making. I’ve got a really strong race car underneath me, my lights have been great, and I’ve been pretty shallow and making sure we keep lane choice.

“The package we’re creating this year has been great. We’ve won a few races. The points battle is always a dogfight, but especially this year with no points reset. Everything is coming down to these last few races, and it’s going to be a battle to the end. Our DSR team cars are tough, there’s just no way around it. My teammates are good drivers, good leavers, they have good race cars, good tuners, and all of the same parts and pieces that we do, so it’ll come down to who will have the best tune-up/driver combo. I’ve won a championship with Dickie (2014), and my first in 2011, so I understand the pressure and what it takes to get there. Sometimes you just have to sit back and trust in your team and allow all of the hard work they’ve put in over the year and the winter to come to you, so I’m just going to drive this Dodge Hellcat as best as I can, and focus on putting on four win lights this weekend.” 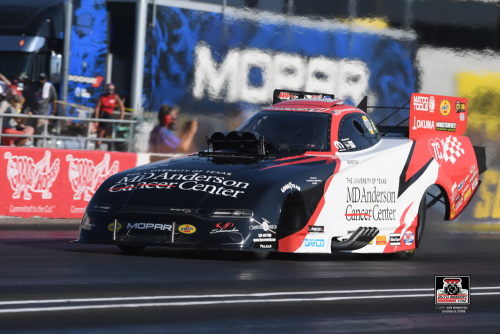 Quotable:
“Gainesville is always a special race for me, it’s where my career started back in 1984. The Gatornationals was the first national event I ever raced. Even though we’re racing there in September and not in March, it’s still the anniversary of the event, so I’m looking forward to it. Gainesville is one of the premier races on the tour, it’s one I’ve never won and I’d really like to get a Gainesville trophy. I’ve got a funny feeling that this may be the year.

“We’re excited to be going to our first race outside of Indianapolis, and going somewhere new for the first time in months. We’re looking forward to a great fan turnout. There’s a lot more pressure on this particular event this year as we’re nearing the points closeout, rather than the points battle just beginning, so it’s a little different than normal.” 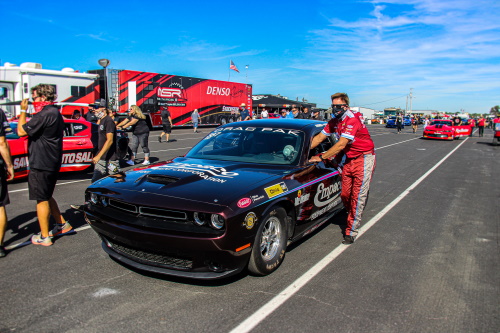 Quotable:
“After qualifying No. 2 and going to the finals at the U.S. Nationals, we definitely have shown that we have revived our program. I’m looking forward to the Empaco Equipment Dodge Challenger Drag Pak having another nice, long Sunday and going rounds in Gainesville this weekend. The team is going to test with Leah (Pruett) before the race to try out some new parts and pieces which we think will make us be even more competitive. (Crew chief) Kevin Helms did a great job turning our performance around from that first showing in Indy this year, and we look forward to continuing it this weekend.” 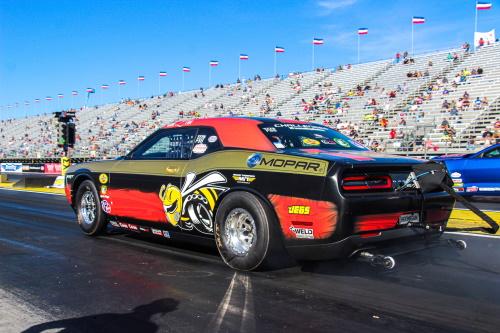 Quotable:
“We have been unable to test for months until this week, which brings me great joy leading into this race. Heading into to South Georgia Motorsports Park with some setup changes Kevin Helms has been wanting to try that will hopefully bring Mark (Pawuk) and I even closer to that win we are both hunting for. I’m proud of Mark and his success in Indy and couldn’t ask for a better teammate.”