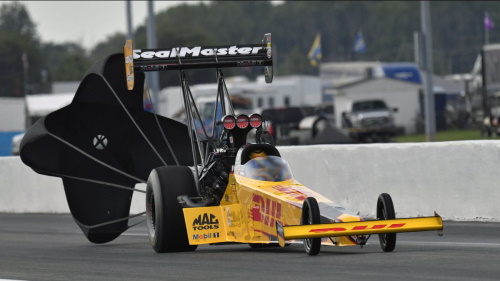 Shawn Langdon will be looking to add his name to the list of Kalitta Motorsports drivers who have captured a Gatornationals title with his first victory at Gainesville Raceway this weekend. He will also be racing for a unique spot in history on the heels of his second Top Fuel U.S. Nationals victory two weeks ago. With the rescheduled Gatornationals this weekend he could win back to back “Majors” which is something no one has done in the modern era. The 2013 Top Fuel world champion has reacquainted himself behind the wheel of the DHL Kalitta Air Top Fuel dragster and he is eager to grab his second win of 2020.

“I have been getting more comfortable in the DHL Top Fuel dragster every run,” said Langdon. “This race car has a ton of power and we just need to pull it all together again this weekend. We picked up that big win in Indy and that shows you how strong this race car is. The past two seasons this DHL dragster has won the Gatornationals and I would like to keep that streak alive.”

“Racing for Connie is a real honor,” confessed Langdon. “He has done it all in drag racing. It is really cool to get back to the hauler after a great run and see a big smile on his face. This whole DHL team is a great group from top to bottom. Getting that win two weeks ago was great but we want to contend for this championship.”

Over his Top Fuel career Langdon has fifteen wins with his most successful season coming in 2013 when he won seven national events on the way to his first Top Fuel world championship. He has raced to 31 Top Fuel final rounds and 19 No. 1 qualifiers in his career, including the 2015 No. 1 qualifier at the Gatornationals.

“I have been lucky to have raced with some great teams. I am thrilled to be back in the DHL dragster. We have so much support from sponsors like Toyota, Mobil 1, NGK Spark Plugs, SealMaster and new sponsor Fifth Third Bank. It would be great to get a third win in a row for this team at the Gatornationals,” added Langdon.

Quotable: Shawn Langdon on winning U.S. Nationals again: “It was great to win Indy again especially with Connie as my crew chief. This was my third win at the U.S. Nationals since I won it once in my sportsman car. You love to win the historic races and the Gatornationals is right up there with Indy.” 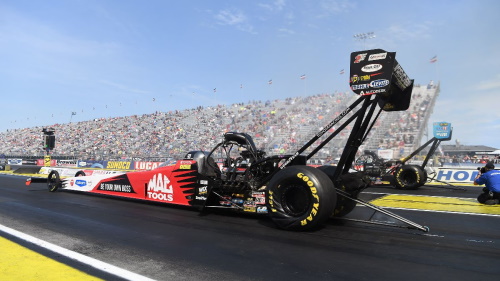 Three-time Gatornationals winner Doug Kalitta will head to Gainesville Raceway chasing history and looking to protect his Mello Yello Top Fuel points lead. Kalitta and his Mac Tools Top Fuel dragster team has been on a mission to secure the Top Fuel world championship for over two decades and once again they are off to a fast start racing to a win at the Winternationals and a runner-up finish at the Arizona Nationals. They have held onto the lead through four consecutive races in Indianapolis but they are eager to start extending that lead with five races left in the season.

“We were excited with the start to the season and I am glad we have held on to the point lead,” said Kalitta. “WE want to get that early season momentum back starting this weekend since I know we need to not only start strong but also finish strong. I have a great team and I really like our chances heading into the Gatornationals.”

Kalitta’s three wins at the historic Gatornationals were recorded most recently in 2014, 2005 and 2000. He also has two No. 1 qualifiers to his credit in 2013 and 2003. A Kalitta Motorsports Top Fuel dragster has won the previous two Gatornationals and Kalitta would like to keep that streak alive in 2020.

“The DHL Top Fuel dragster that Connie (Kalitta) tunes has won the last two Gators so we would love to see an all Kalitta Motorsports final round,” said Kalitta. “There is so much history here for our team and I just get pumped up racing here. We have had a lot of success and I want to keep that positive momentum going. I am really glad we were able to keep this race on the schedule because there is so much history here.”

Only four Top Fuel drivers have four or more wins at the Gatornationals and Kalitta would love to add his name to a list that includes Don Garlits (4 wins), Joe Amato (4), Larry Dixon (4) and Tony Schumacher (5).

“You want to win the big races of the season,” said Kalitta. “We got our first Indy win last year and that was a big boost. We won again at the Winternationals and to possibly get another Gatornationals win and join those four time winners would be an amazing accomplishment. Getting wins at the Gatornationals or Pomona or Indy definitely make for great memories.”

“I have had a great career and I am looking forward to a lot more round wins. The key to our success I think has been the stability of our team and our sponsors like Mac Tools. So many of those wins have come in the Mac Tools Top Fuel dragster and I am very proud to represent them as well as Toyota, SealMaster, DHL and new sponsors like Mobil 1, NGK Spark Plugs, Fifth Third Bank, Osborn and Ozium,” added Kalitta. 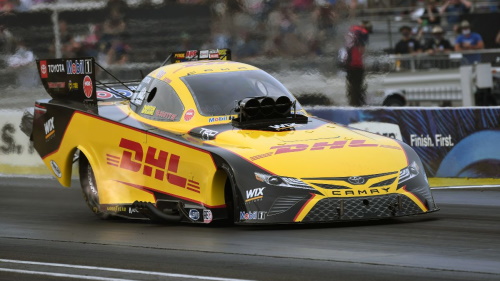 The DHL Toyota Camry Funny Car team and J.R. Todd will be heading into the historic NHRA Gatornationals looking to add their names to a historic list of Funny Car winners. For over fifty years the iconic race held at Gainesville Raceway has seen legends made in front of record crowds packing the grandstands all weekend. As the first race on the East Coast the Gatornationals has been the site of record setting performances and memory making runs.

“There is so much history at the Gatornationals you just want to get a win there to add to your resume,” said Todd. “I think you look at the drivers who are Hall of Famers or legendary drivers and they all have at least one win at the Gatornationals. I want to add my name to this list.”

The 2018 NHRA Funny Car is coming into the race with back to back runner-up finishes in Indianapolis including two weeks ago at the prestigious U.S. Nationals. The DHL Toyota Camry has been dominating on race day and that kind of performance gives Todd even more confidence

“We were making improvements once we got back to racing and the past two events we have been right there for our first win of the season,” said Todd. “My crew chief Todd (Smith) and Jon (Oberhofer), are making adjustments and we are really making good runs. One of the many things this team has going for it is we have a lot of confidence in each other. We have been through the ups and downs together so we are staying positive and looking forward to this weekend. I think we still have a shot at this championship.”

The history of the Gatornationals should help turn out the fans for the rescheduled event. Originally scheduled for March this will be the latest the event has been contested. The crowds should turn out for the first event on the east coast of the season.

“There is always a great crowd in Gainesville for this race,” said Todd. “We just need to put our heads down and come out with good runs on Saturday. The race day on Sunday will be a lot of fun if you have a couple good qualifying passes in your back pocket. All the Kalitta Motorsports teams will be working together and even though I am the only Funny Car there is a lot of collaboration over here.”

Quotable: J.R. Todd on racing on East Coast: “It will be good to get to a new track. I liked racing in Indy because it was convenient but getting to the East Coast will be cool. We have a ton of fans out here and they have been waiting a long time to see some drag racing. I want to put on a good show with this DHL Toyota Camry.”