ALTON, VIRGINIA (25 SEPTEMBER 2020) – The Trans Am Series presented by Pirelli returns to VIRginia International Raceway this weekend (September 25-27) for an event unlike any other on the schedule in its 56-year history.

Trans Am will hold separate races for the TA/XGT/SGT/GT and TA2® powered by AEM classes on Saturday (September 26), and then a combined event on Sunday (September 27) for all five classes.

Fifty-one drivers are slated to compete in the Heacock Classic Gold Cup double feature at VIR, and the three-way split start scenario during Sunday’s race is sure to spark excitement from an already rivalry fueled TA2® powered by AEM class.

Fans can stream the weekend spectacle from the Trans Am by Pirelli Racing App. 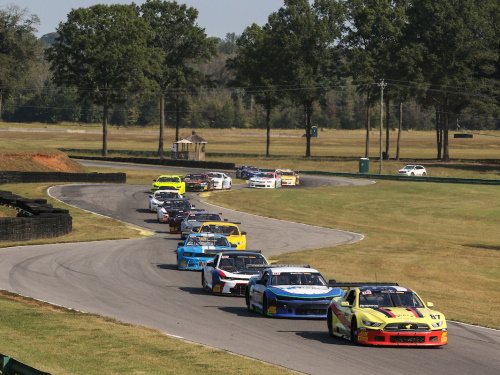 Since the opening race at Sebring International Raceway, much of the world has adapted to social distancing and no contact interactions. But that is far from true in the TA2® powered by AEM. Since the post-quarantine return at Mid-Ohio Sports Car Course, TA2® has delivered everything from photo finishes, intense wheel-to-wheel racing, dramatic contact and controversial finishes this season.

The TA2® competitors are eager to get back to competition, having had the Road America round end short of the 100-mile scheduled race distance

While TA2® points leader Mike Skeen emerged from the Road America melee unscathed, his No. 77 Liqui Moly / Turn 14 Distribution Chevrolet Camaro was not as fortunate. Damaged beyond repair, Skeen traded in his Camaro and will break in a new Ford Mustang at VIR prepared by reigning TA2® team champions Stevens-Miller Racing this weekend. 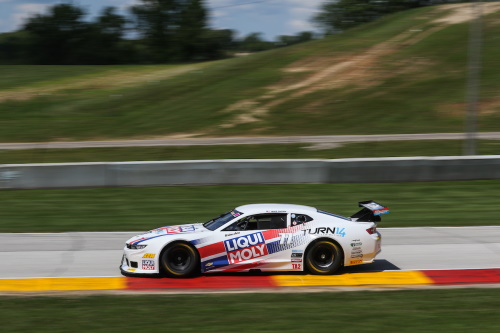 However, through the trials and tribulations of the TA2® season, Skeen has remained nearly perfect in results, winning three of the four rounds. He leads the championship with 129 points, 21 points ahead of second-place Thomas Merrill.

“There have been a lot of tough battles in TA2 this year, but Stevens-Miller Racing has given me a great car at every event to fight up front,” Skeen said. “Even though we’ve switched to a Ford-powered Mustang for our No. 77 Liqui Moly/Turn 14 Distribution car, Howe Racing and Katech have helped tremendously in getting us fixed up after Road America. I can’t wait for the doubleheader weekend here at VIR.”

With tensions already high from Road America, VIR also marks a scary moment in Scott Lagasse Jr.’s racing career. Last season on his way to defending his 2018 season VIR win, Lagasse Jr. went airborne as he raced through the Roller Coaster section of the track. The incident saw his white Camaro come to rest upside down. The popular and experienced Floridian emerged from the incident, but missed the last two events of the season for precautionary reasons.

“VIR is a favorite for everyone on the M1 Racecars team,” said Lagasse Jr. “This is one race we have circled on our calendar every year because of the great people, hospitality and scenery. Last year, the safety crews did an amazing job helping me after the accident. I’ve seen the track from some unique angles and there isn’t a better view than the top step of the podium. I’m focused on the future of Trans Am and M1 Racecars and excited about where the series is going.”

Thomas Merrill (No. 81 Diehl-MerrillRacing/HPTuners/MCR Ford Mustang) crossed the finish line first last season at VIR, but a post-race penalty awarded the win to eventual 2019 Champion Marc Miller. With the speed and power to take the checkered and his strength to use traffic to his advantage, Merrill is looking to turn his 2019 missed opportunity into 2020 victory.

The 2018 TA2® champion Rafa Matos is hungry for a victory. In two races he’s rallied from last place (or near last place start) to contesting for a win. At Mid-Ohio, mechanical issues sent him home early, at Road America he made up 25 positions to take first on the red-flag lap, a lap that wasn’t scored. After reverting back to the last scored lap before the red flag, Matos had to settle for third-place, which is the highest placement he’s earned so far this season, three separate times. Driving a new car for a new team this year, No. 7 Silver Hare Racing Chevrolet Camaro, Matos is on the verge of a season breakthrough.

“I think this weekend will shape out the final part of this season,” Matos commented. “We are seating third right now but anything can happen at this point. We can leave VIR leading the championship if we handle everything correctly.” 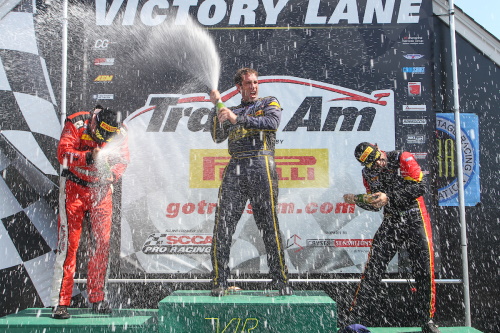 At Road America Cameron Lawrence won his first pole position of the season, but failed to complete a circuit after a first-lap incident with another car sent his wounded No. 8 3-Dimensional Services Group Ford Mustang to the pits early. Winning at VIR during his championship season in 2013, Lawrence has mastered the 3.27-mile, 17-turn facility, and with an added race to timetable, Lawrence has an additional opportunity to make up points to close the gap on the championship.

With the race winner receiving 30 points, the fastest qualifier earning three points and a bonus point awarded for leading a lap and another additional point for leading the most laps, the championship standings after the double-header at VIR could look quite differently than they did before the weekend.

The official Heacock Classic Gold Cup weekend for Trans Am kicks off on Friday with back-to-back group practices starting at 11:20 a.m. Eastern, followed by 15-minutes qualifying sessions in the afternoon starting at 4:40 p.m. Eastern with the TA group, followed by XGT/SGT/GT, then TA2®. For Live Timing and Scoring, follow www.gotransam.com/livetiming

On Sunday, all five classes will take the green in a three-way split at 11:05 p.m. Eastern

The two-day race event will be live streamed on the Trans Am by Pirelli Racing App.