ORRVILLE, OH (September 26, 2020) — Sheldon Haudenschild had to pause. His words caught in his throat.

An emphatic cheer filled the silence while Haudenschild collected his emotions.

The Wooster, OH driver made a dream come true – for himself and thousands of his Ohio fans. He won at home. 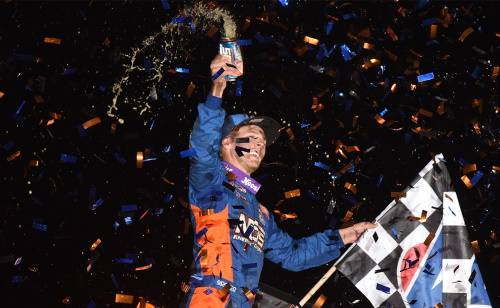 After testing the limits of his NOS Energy Drink #17 car for 35 laps around Wayne County Speedway – about 15 minutes from his home – Haudenschild parked it in Victory Lane.

“I don’t even know what to say, man,” Haudenschild said before taking a pause. “These fans are bad ass. I knew when we’d get a race here the fans would show up. I’m glad they did. 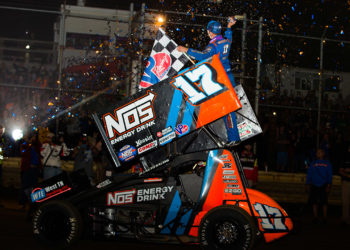 “I can’t thank my team enough. To have (Crew Chief Kyle) Ripper back has meant the world to me. These guys know Rip. He’s the man for sure. He’s got it figured out. Just so glad to have him back. And to have (crew members) Nickolas (Goodfleisch) and Drew (Brenner). We’re brothers. I’d do anything for them three and I know they’d do the same for me. Just very grateful to be in this NOS Energy Drink car. It’s a once in a lifetime opportunity for a 27-year-old from Wooster.”

The win is Haudenschild’s sixth World of Outlaws NOS Energy Drink Sprint Car Series victory of 2020 and his first Series win at his home track. However, it wasn’t his first ever win at the track. Several of the fans who lost their voices cheering for him had watched Haudenschild start his Sprint Car career at Wayne County.

He entered the $15,000-to-win event presented by Slick Woody’s Cornhole Co. with several laps of experience around the 3/8-mile track and seven wins – two with the Buckeye Outlaw Sprint Cars and five with the All Star Circuit of Champions.

That experience proved beneficial as Haudenschild dominated the night. He was fastest overall in Hot Laps; fastest overall in Qualifying – earning himself a prize package from Slick Woody’s; won his Drydene Heat Race and then finished third in the DIRTVision Fast Pass Dash after starting fifth.

Reigning champion Brad Sweet led the field to the green flag for the 35-lap Feature with second-place Shane Stewart in tow. Haudenschild fell to a few car lengths behind Stewart in the early stage of the race, leaving the top-two to battle for the lead.

While Sweet ran low, Stewart made the most of the top groove against the cushion. He used it to his advantage on Lap 8 by rocketing around the outside of Sweet to claim the lead. Haudenschild tried to make the same move but a caution but a brief pause to his plans.

On the restart, Haudenschild clicked play and launched ahead of Sweet before the first turn to claim the runner-up spot. He then put Stewart in his crosshairs. The Indy Race Parts #71 was in Haudenschild’s desired lane, though, forcing him to try and pass Stewart on the bottom. Haudenschild could dive under Stewart into each corner and exit even with him, but the top lane allowed Stewart to edge ahead each time.

Stewart’s hold of the top lane ended on Lap 11 when he jumped over the cushion, forcing him to slow and regain control of his car. That provided an easy pass for both Haudenschild and Sweet.

Over the roar of the 900hp Sprint Cars, thousands of cheers could be heard when Haudenschild officially claimed the lead. And once he was given free reign out front, the Stenhouse Jr.-Marshall Racing car entered a new dimension of speed.

Haudenschild pulled Sweet by 2.5 seconds in a handful of laps. Slower traffic became a factor soon after and they didn’t make his life easy. Logan Schuchart, who is second in Series points, raced Haudenschild as if they were going for the win. Even with those hinderances, Sweet still couldn’t catch Haudenschild.

Stewart snuck back around Sweet for second with eight laps remaining and was given one shot to upset the Ohio crowd. A caution came out with three laps to go, stacking the field up single file. When the race resumed, Stewart threw his car as deep as he could into Turn 1 to try and get a run underneath Haudenschild, but the NOS Energy Drink machine was too strong up top. By the end of the three laps, Haudenschild had gapped Stewart by a second.

“I felt like if I could get a decent enough start, I could slide him a little bit,” said Stewart, of Bixby, OK. “But what a huge win for him. This is definitely going to be one for him to remember. He did a good job.” 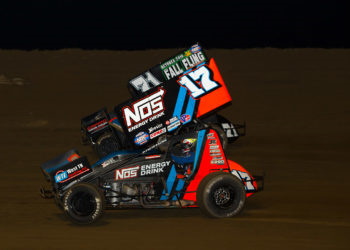 Sweet had to settle for third, but once again made a significant points gain on Schuchart, who finished 15th. He now leads the Shark Racing driver by 44 points for the driver championship. In the team championship points, Sweet’s Kasey Kahne Racing team currently leads Jason Johnson Racing by 38 points.

“I felt like Sheldon was going to be aggressive,” said Sweet, of Grass Valley, CA. “He has a lot of laps here. I knew he was going to be tough. It’s kind of cool to see the crowd behind him and see him win in front of a home crowd… At the end of the day, I wasn’t willing to take the risks they were willing to take. It cost me the win but big picture, sometimes you have to get the best possible finish you can.”

While Haudenschild stood in Victory Lane, holding his NOS Energy Drink, his words escaped him. He didn’t know what to say. His fans helped, though, as they shouted, “Sheldon! Sheldon! Sheldon!” 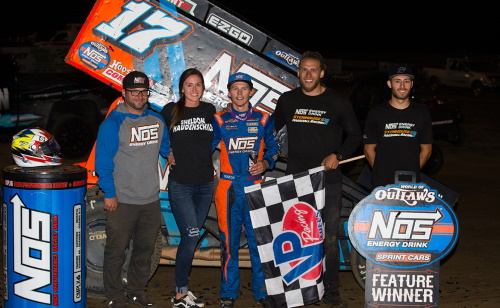