Leading all 50 laps at Thunder Mountain Speedway, the Mooresburg, Tenn. native was undeniable on Friday night. The legend that they call Black Sunshine, Voodoo Child, Dirt Trax Dominator, or simply Bloomer, survived a series of cautions, trips through traffic, and one remarkable rally in the late running to earn the $10,000 victory at the Knox Dale, Pa. 3/8th-mile.

Not only was Friday his first win of the year, but the Thunder Mountain triumph marked Bloomquist’s first victory of any kind since November 30, 2019 at Cochran (Ga.) Motor Speedway; which came 302 days ago. A 44-race drought was broken as well, bringing an end to the longest winless streak of his World of Outlaws Morton Buildings Late Model Series career.

“It’s been too long,” a relieved Bloomquist told a raucous crowd that greeted him in victory lane. “This hip replacement ended up being far more difficult than I imagined. I honestly figured we could hop right back into the swing of things, but not being able to feel your foot or leg makes it pretty hard inside the cockpit. I can’t thank Drydene enough for sticking with us through this year.” 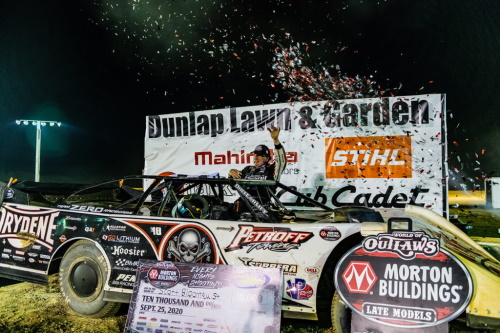 Fans witnessed a smiling and joyful Bloomquist following his long-awaited return to the top on Friday night. [Jacy Norgaard Photo]

Drawing the outside pole of the Morton Buildings feature, Bloomquist quickly outgunned polesitter Mason Zeigler into turn one and commanded the opening circuit to lead his first lap of the year in the 35th race on tour. Grasping control of the race lead, Bloomquist would never seriously be challenged until the closing laps, after myriad of mid-race cautions drained his pace, but at the same time kept him out of lap traffic.

The most notable stoppage of the night came in the form of a lap 16 red flag which sent tempers through the roof and cars off on the hook. In the midst of a heated battle for the second spot behind Bloomquist, Zeigler of Chalk Hill, Pa. and Chase Junghans of Manhattan, Kans. made contact in turn three and carnage ensued. While Zeigler drove away, Junghans’ No. 18 was sent spinning in front of the field. Innocently collected in the melee was 6th-running Gregg Satterlee of Indiana, Pa. and 14th-running Cade Dillard of Robeline, La., who had nowhere to go and piled into the mess.

Fast forwarding to the final restart on lap 36, Bloomquist stretched his advantage out while the trio of Darrell Lanigan, Brandon Sheppard and David Scott waged war for the runner-up position. However, with ten to go, the tide shifted. As Bloomer appeared to be faltering, Lanigan and Sheppard started thriving and chopped into the lead. Eating it down to several car lengths and then down to his back bumper, fans nearly witnessed a three-wide shot for the win.

Stealing second from Lanigan with four to go, Sheppard rose to the occasion as the biggest threat to Bloomquist’s lead in the waning laps. B-Shepp brought his Rocket Chassis No. 1 closer to the Team Zero No. 0 at the finish, but ultimately fell .517 seconds short at the checkered flag as Bloomquist and crew celebrated a much-needed and long-awaited victory with the World of Outlaws Morton Buildings Late Model Series.

“I’ll tell you what, I’ve got all the feeling back in my leg and we’re about 60% feeling back in the foot,” Bloomquist noted on his condition. “I can feel the throttle again and I can really work it. It’ll get nothing but better from here.” 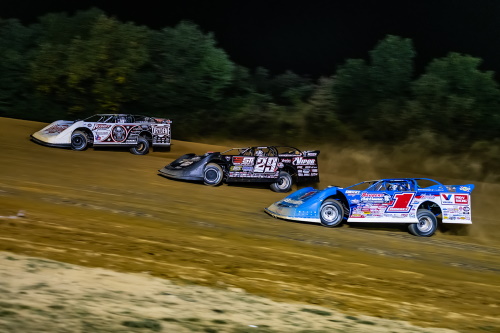 Bringing it home with a second-place finish, Brandon Sheppard of New Berlin, Ill. missed the 14th win of the year he wanted, but he did extend his points lead as he and Rocket1 Racing pursue their third World of Outlaws Morton BuildingsLate Model Series championship together.

“This track was pretty tricky,” Sheppard thought on the 3/8th-mile. “I was married to the top for that last half and I really just needed to get to second, so I could choose my restart position and go up top, I was getting killed stuck on the bottom. I eventually just got mad and got up on the wheel there at the end. I started going way higher in turns three and four and we got up to Scott, but just ran out of time. Congratulations to him and that team, they’ve been working hard all year. We’ll go to work and come back better tomorrow.

Extending his series record to 194 podium finishes with the World of Outlaws, Darrell Lanigan of Union, Ky. continued his resurgent 2020 campaign with a third-place effort aboard the Viper Motorsports, Barry Wright ICON Race Cars No. 29V.

“I think Scott went a little harder on tires than us and we just gave up too much there at the end,” Lanigan stated on what he was missing. “This place is pretty different than anywhere we’ve been lately, but all in all tonight was good for us. We’ve been working hard in the shop and its paying off.” 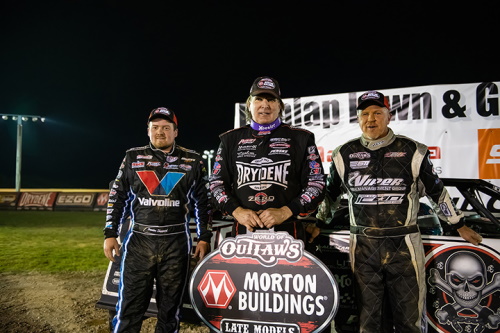 Arguably the story of the night behind Bloomquist’s return to victory lane came in the form of Friday’s fourth-place finisher, David Scott of Garland, Pa.. Slowride ran a 2012 Rayburn Race Car with an estimated 15-year old engine all the way from 15th-to-fourth, giving him his second ever top five finish with the World of Outlaws. Rounding out the top five at Thunder Mountain was hard charger Max Blair of Titusville, Pa., who delivered a stunning 22nd-to-fifth run aboard his Rocket No. 111.

Closing out the top ten on Friday night was Dennis Erb Jr. in sixth-from-17th after qualifying issues set his night back; Jared Miley of Pittsburgh, Pa. in seventh-place after challenging for second around midway; Rookie of the Year Ashton Winger in eighth-place after also running top five earlier on; and a pair of Bear Lake, Pa. natives, Chub Frank and Boom Briggs, finishing ninth and tenth.

At the end of the night, Bloomquist put the sport on notice, saying this:
“No Weak Links. We’re gonna be back.”

The World of Outlaws Morton Buildings Late Model Series concludes a doubleheader weekend at Thunder Mountain Speedway with another showdown at the Knox Dale, Pa. track on Saturday night. Hot laps are scheduled to go green at 7:00pm ET with another full program of qualifying, heat races, last chance showdowns, and a 50-lap feature on the docket. For those unable to join the crowd, you can watch Every Lap LIVE on DIRTVision..