Alton, VA (September 27,  2020) – Esports star Tyler Kicera brought his prowess to the physical world by, scoring his first victory in his fourth TA2® Powered by AEM start on Saturday. Kicera pulled away from three of the series stars to win in a seven-lap sprint in the opening race for the Trans Am Series presented by Pirelli unique doubleheader at VIRginia International Raceway.

On Sunday, all five Trans Am classes will combine for a 100-mile race to complete the weekend. 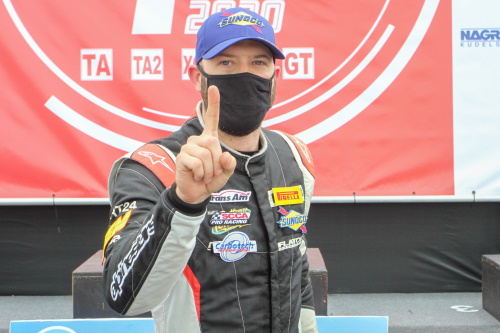 Kicera finished second in the recent Trans Am by Pirelli Esports Championship, winning five races. On Saturday, he took over second on lap 2 and raced into the lead two laps later. Moments later, an incident resulted in on-track repairs that put the field behind the safety car for 17 laps. When racing resumed with seven laps remaining, the Manheim, Pa., driver pulled away from Rafa Matos, Cameron Lawrence and Thomas Merrill to win by 2.480-seconds.

“I knew it was going to be a tough race,” Kicera admitted. “Rafa (Matos) is super aggressive and Cameron (Lawrence) was close behind as well. I did lead a lot of laps during the Esports championship, so I tried to tap back into that mindset of eyes ahead and hitting my marks. That consistency paid off. I had a great amount of grip but knew I needed to go to the outside. I ran as hard as I could. I saw the gaps open up a bit, made my move and was able to prevail.”

Kicera’s triumph was not only notable for his transition from virtual to real-world racing, but it also underscored the level playing field that the TA2® category creates with his family-run team emerging as winners.

“Thanks to my sponsors and to Trans Am for sticking it out through this really tough time and giving us a great platform to race on,” said Kicera. “My dad is my crew chief, my best friend is here helping out, my grandfather is here, my uncle Pete is over here. We don’t have big support so this is literally a family run thing and we’d love to do more of it next year. I think we proved today that we are capable of that and that we belong here. I am just so happy that I’m speechless.”

Matos took the lead at the start, but quickly felt the challenge from Kicera before losing the lead on lap four. Matos maintained second for the remainder of the race despite several challenges in the closing laps.

“Tyler (Kicera) was hooked up today,” Matos said. “Today was our day to finish second and collect good points for the championship. We will keep digging and hopefully get the win tomorrow. My car was handling very well, but we couldn’t catch him. But it was a good day for us.”

Lawrence also was in the hunt en route to his second podium finish of the campaign in the No. 8 3-Dimensional Services Chevrolet Camaro. 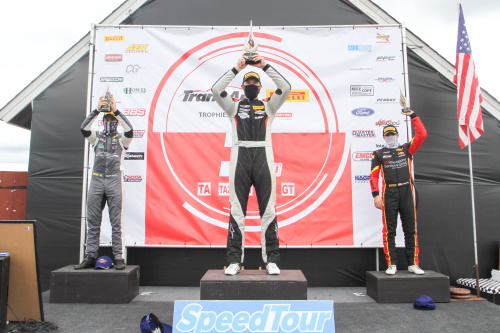 “It was a fun race when we were able to go back to green,” Lawrence said. “Our car was fantastic today. We battled with Rafa (Matos) and had some close racing. If we could have gotten past Rafa (Matos) I think we would have been able to fight with Tyler (Kicera) for the lead. We are going to regroup and try and mix it up with everyone for the win.”

Entering the race second in the points, Merrill raced to a steady fourth in the No. 81 Diehl-Merrill Racing/HP Tuners/Mike Cope Racing Ford Mustang with a last lap charge to the podium that came up just a blink short.

Connor Mosack made his TA2® debut with a fifth-place finish in the No. 96 M1 Racecars Chevrolet Camaro.

Series point leader Mike Skeen started on the pole in the No. 77 Liqui Moly/Turn 14 Camaro but began losing power early in the race and was never a factor. He finished sixth, maintaining his lead in the championship.

John Paul Southern Jr. apparently lost the brakes in the No. 61 pitrace.com/Southern Motorsports Camaro on lap four. He hit the barrier in Turn 14, with his car coming to rest atop the tires. He was OK, but the incident resulted in a lengthy caution to extricate the car and repair the barrier.

Tom Sheehan recorded a TA2® milestone by becoming the first competitor to compete in 100 races in the class. Sheehan joined TA2® during its inaugural campaign in 2011, finishing fifth in the class. Since then, the driver from Bow, N.H. missed only one race-the 2014 season finale at Daytona.

Saturday, Sheehan was running a solid seventh when he pulled off with only seven minutes remaining with a mechanical issue.

“It’s been cool to watch this series grow,” Sheehan said. “When it started, I was looking for a new challenge, so I called [TA2® pioneer] Bob Stretch out of the blue. I really wanted to continue working on my craft and race at a higher level, with more competition. TA2® was really attractive. So we struck a deal, and Bob and I ran together for four seasons. This is what racing should be about – TA2® really puts it in the driver’s hands. Running 100 races has been a lot of fun – I hope I can do 100 more!” 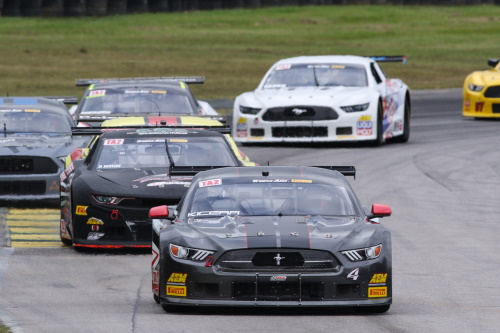 During the closing laps, Kicera turned the fastest race lap – 1:51.826-seconds – to earn the TA2® pole position for Sunday. He will be joined on the front row by Merrill, who had a best lap of 1:52.147-seconds.

The weekend concludes Sunday with a combined race for all Trans Am classes. The 31-lap race – with a 70-minute time limit – will have a three-way divided start. The TA competitors will lead the field, followed by the TA2® grid, then the XGT/SGT/GT competitors. The green flag is scheduled to wave at 11:05 a.m. ET.

The race will be live streamed on the Trans Am by Pirelli Racing App.