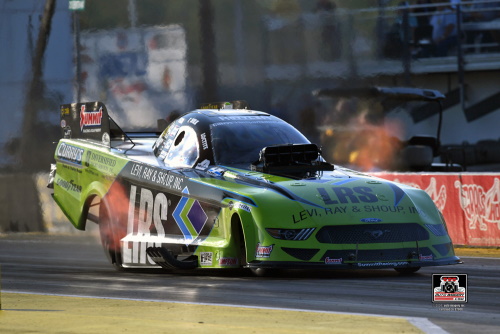 GAINESVILLE, Fla. (September 27, 2020) – It was no surprise to Tim Wilkerson when his Levi, Ray & Shoup Ford Mustang nitro Funny Car blasted to the provisional pole in the first round of qualifying at Gainesville. Last season, Wilk nearly won the 50th annual running of the Amalie Motor Oil NHRA Gatornationals there, and this year, he’s looking at all the factors that will help him close the deal on his 21st Wally trophy.

Wilk heads into raceday as the No. 2 seed at Gainesville Raceway this time around, and he would have gotten away with No. 1 if it wasn’t for that darn Matt Hagan. Wilkerson clocked a 4.003-second pass at 318.47 mph in the first session, and Hagan got down into the 3-second zone at the very last moment to knock him down a notch.

The venerable driver of the LRS Mustang isn’t too terribly upset about it, though – Sunday eliminations is where it will all be settled, and he’ll square off in round one with Terry Haddock.

“We have a fast car,” said Wilkerson. “I’m pretty excited about how it’s working, and the guys are doing a good job. Good Lord willing and the crick don’t rise, we’ll do some good tomorrow.”

Springfield, Ill., based Wilkerson and his guys were unphased by a treacherously warm day, one that was weighted by thick and soupy air.

“You try to trick that clutch into thinking it’s got the same motor in front of it every weekend,” explained Wilkerson. “That’s the hardest part. We go from Indy and beautiful weather last weekend to sea level here, plus it’s 120 grains [water grains in the air] and 90 fricken’ degrees, and it’s just miserable. But my motor is within about 10 rpm of what it needs to be. I came back and told my wife Krista, look at that.

Eliminations for the 51st annual Amalie Motor Oil NHRA Gatornationals will begin at 10am ET on Sunday, September 27, 2020.