SARVER, PA (September 27, 2020) — Running second, more than six seconds behind the leader, with two laps to go, was the perfect spot for David Gravel.

His hopes of curing the hunger for another win went from being unattainable to nearly guaranteed with the sound of a pop Saturday night at Lernerville Speedway. 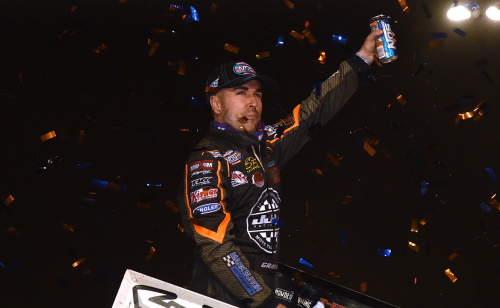 Sheldon Haudenschild, who was in his own world as the leader, lapping up into the top-15 around the 4/10-mile track, blew a tire with two laps to go. His strangle hold on the lead was released and fell to Gravel.

After a month of failing to return to Victory Lane with the World of Outlaws NOS Energy Drink Sprint Car Series, Gravel found a golden horseshoe in Pennsylvania and made the most of the opportunity handed to him. He led the final two laps and parked the Jason Johnson Racing #41 in Victory Lane at Lernerville for the second time in two years – his fourth career win at the track. 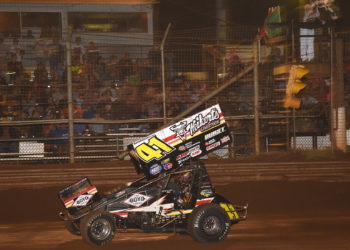 “Sheldon was the class of the field,” said Gravel, of Watertown, CT. “If he didn’t blow a tire, I would’ve run second. But a little bit of racing luck got us the win tonight. I don’t know where Sheldon was running, but I’m guessing he was running aggressive on the top and ran a torrid pace.”

Gravel didn’t feel like the team unloaded well at the start of the night, qualifying third in his flight. However, that sentiment changed after he won his Drydene Heat Race.

“The Heat Race, we had a really really good race car,” Gravel said. “Then we drew a seven (in the DIRTVision Fast Pass Dash draw). I didn’t get too upset because 35 laps here, this is one of the best racing tracks we go to. There’s always lanes to run three wide. That’s why it’s one of my favorite places to go to.”

Gravel started sixth in the 35-lap Feature and quietly made his way up through the field, while Haudenschild set a blistering pace as the leader. He went from sixth to fifth on the initial start but found himself stuck there for the first 18 laps. After moving his wing back, Gravel found traction and speed.

By Lap 19 he was fourth. By Lap 25 he was third. And by Lap 30 he was second. However, with five laps remaining, his chance of a win was out of the question. Haudenschild, coming off a hometown win in Ohio from the night before, made himself untouchable. After taking the lead on the first lap, he pinned his NOS Energy Drink #17 car to the top of the track and found a level of speed others couldn’t.

James McFadden ran second for the majority of the event, before getting passed by Gravel, and only saw Haudenschild for a handful of laps before he was a blur that disappeared in traffic.

Then everything changed with a pop. Haudenschild brought out the first caution of the night with two laps to go as he limped to the infield work area with a deflated right rear tire.

When the race resumed, Gravel pulled ahead of McFadden and ran away with the $10,000 Commonwealth Clash victory – his fifth Series win of 2020. McFadden finished second and Daryn Pittman rounded out the podium. Haudenschild was able to make it back on track and salvage a 13th place finish.

For McFadden, the runner-up finish is his second podium in three races behind the wheel of the Karavan Trailers #9 car.

“We were actually really really good there on the last restart,” said McFadden, of Warrnambool, VIC, Australia. “I started struggling there the last five or eight laps. Whatever happened on that last restart, must have built up air pressure in the tires or something, and started to feel really good again. Hats off to David (Gravel). He doesn’t make many mistakes.”

This week marked Pittman’s first time driving for Heffner Racing in 2020. In three World of Outlaws races, so far, they’ve improved each time. He finished 14th in the Red Robins #72 car at Plymouth Speedway on Thursday. Then finished 10th at Wayne County Speedway the next night. And then third at Lernerville.

“We’re tickled to death,” said Pittman, of Owasso, OK. “That’s a win for us in our first week together in five straight nights. First off, I have to thank Kale (Kahne) and Heath (Moyle) for the amount of work that they put in. Man, we’re ready for a day off tomorrow, I can tell you that, and there’s no better way to finish it up with a solid run like we had here tonight.” 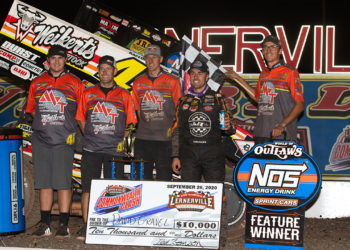 Logan Schuchart put a small stop to the bleeding in his championship hunt by finishing fourth at Lernerville. Points leader Brad Sweet had gained 36 points on Schuchart the two previous nights but lost four points to him after finishing sixth Saturday night.

While the crown wouldn’t be for him, Gravel is committed to delivering a championship for JJR.

“Hopefully we’re going to get hot here and finish the season strong,” Gravel said. “We’re in contention to win this points championship, so we’re going to keep fighting until the last race.”

The World of Outlaws NOS Energy Drink Sprint Car Series, on Fri, Oct. 2 and Sat., Oct. 3, return to Williams Grove Speedway for the Champion Racing Oil National Open, which will pay $75,000-to-win on Saturday. Click here to get tickets.

If you can’t make it to the track, you can watch both nights live on DIRTVision. 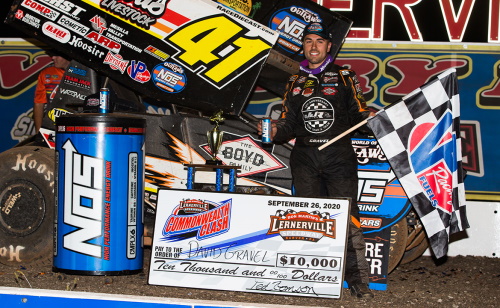