The Pittsburg, Pa. native was less than 3/8ths of a mile away from his first career World of Outlaws Morton Buildings Late Model Series victory. It was so close, he could almost taste the delicious glory he’d been longing to earn. In one swift moment, however, everything changed.

His worst nightmare came true; the caution came out. Erasing Miley’s comfortable advantage and restarting Brandon Sheppard of New Berlin, Ill. hot on his tail with a green-white-checkered finish on tap. What followed? An incredible two-lap bout for $10,000 with B-Shepp and The Jet squaring off in front of a standing-room only crowd at Thunder Mountain Speedway.

Miley aced the restart until the edge of turn two reached out and bit him, allowing Sheppard to drive by down the backstretch. It wasn’t over though; Miley then launched a turn three slider at Sheppard and the pair ran side-by-side to the white flag with the crowd on their feet. Sheppard tossed his own turn one slide job at Miley, then it was a frantic dash to the checkered flag.

Coming to the stripe, it was ultimately Sheppard’s Rocket1 Racing No. 1 beating Miley’s Blue Mountain Energy No. 10 by a mere .302 seconds. While Miley’s first career win slipped through his grasp, Sheppard rose from the car to a chorus of mixed reactions from the Knox Dale, Pennsylvania fans after stealing a win from one of their beloved home state drivers. 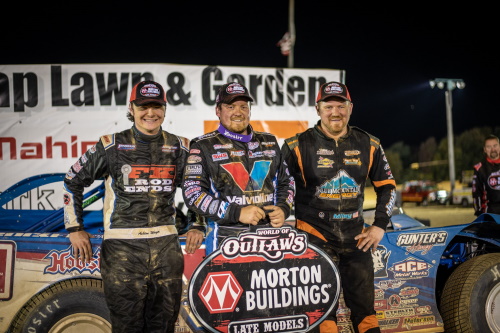 Leading 25 of the 50 laps, Miley controlled the top spot from his remarkable lap 23 restart until the daunting green-white-checkered at the end. Starting fourth after winning his Drydene heat race, the 34-year old racer quickly displayed his Rocket No. 10 as arguably the fastest car in the feature. While Darrell Lanigan – chasing his 75th career World of Outlaws win – paced the opening 22 circuits with relentless pressure from polesitter Boom Briggs, Miley was finding his rhythm and mounting a run.

His opportunity came on the lap 22 restart and he seized it tenfold. Wheeling from third-to-first in one lap, Miley immediately made his case known on Saturday night. He disposed of Bear Lake, PA’s sensation simply known as Boom and then attacked The Bluegrass Bandit on the low line through turns three and four, beating him to the stripe by .006 seconds to lead lap 23.

Miley survived four, count ’em four, restarts without any trouble as he mastered the Sea Foam Restart Zone. He pulled away and squabbled any bid that Lanigan, Briggs, or Sheppard could throw his way time and time again. That is until the last and most important restart came his way with the win on the line. 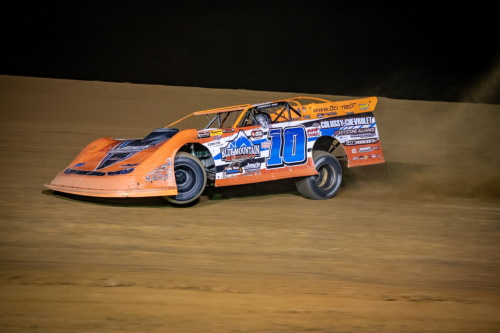 Miley, who hails from Pittsburgh, electrified the Knox Dale, Pa. crowd with his near first-career win at Thunder Mountain Speedway. [Jacy Norgaard Photo]

Leading Sheppard to the green-white-checkered, Miley actually rocked the restart and built some distance between he and Sheppard as they ran off into turn one. Then the No. 10 got tight, pushed in turn two, and it all changed. Then Sheppard drove by, Miley went hard at him with a slider, they raced side-by-side, Sheppard countered into turn one, and survived a last-ditch effort to stun Miley in the closing moments.

“There’s no doubt that Jared definitely had that race won,” Sheppard was quick to admit in victory lane. “That was tough race, but man that was a lot of fun. I got by him down the backstretch then he slid across my nose over there in turn three and I got him back down here in turn one; what a great finish. You had to drive the heck out of it here tonight. This Rocket Chassis is a dream to drive right now, especially in front of a packed crowd like this.”

For Sheppard, after leading only two laps of Saturday’s 50-lap feature, he rose from the Rocket1 Racing No. 1 as a World of Outlaws Morton Buildings Late Model Series winner for the 69th time in his career, the 14th time in the 2020 season. A testament to their dominance, Sheppard and the Valvoline No. 1 crew snapped a four-race winless streak, which ranks as their third-longest drought across the last 76 races dating back to the start of 2019. 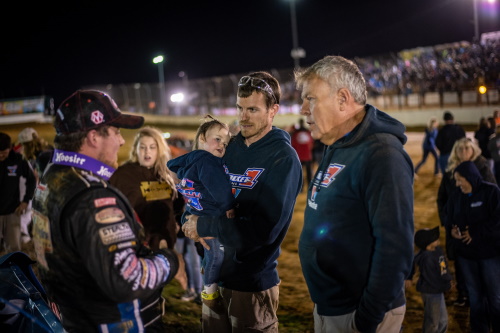 While Sheppard basked in the joy of victory lane, Miley was forced to sit stage right and collect his thoughts after a dejecting loss. Acknowledging his tough moment, the Pittsburgh fan favorite remained humble in defeat, kept his head up, and promised to work that much harder to get his first career World of Outlaws Morton Buildings Late Model Series win.

“I saw Sheppard was in second on that last restart and I knew it would be the toughest one on me,” Miley noted on the lap 48 restart. “We had a great car, but I just got in too high and caught a push there at the exit of turn two. I tried to get back by him, but I wasn’t gonna take him out or anything. It was great racing and he did what he needed to. This sucks, but whenever we get that first one, I know it’ll be awesome. At least the fans got to see such an awesome race.”

Following Sheppard and Miley to the finish line was leading Rookie of the Year contender Ashton Winger of Hampton, Ga. with a hard-charging effort from 19th-to-third.

“I know what it’s like when the blue No. 1 car slides you for your first Outlaw win; your heart skips a couple beats,” Winger, who beat Sheppard straight up for his first win in July, joked afterwards. “For us, it was a tough weekend, but we’re getting there. I’m exciting about this rookie year we’ve put together. I’m learning a ton and having a lot fun out here.” 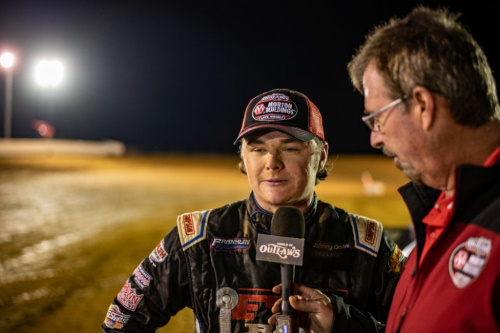 The Crusher Kid Mike Norris capped his night with an impressive 18th-to-fourth bid. Dennis Erb Jr. of Carpentersville, Ill. continued to gain ground in the chase for a top five in the championship standings with his fifth-place finish in the Rocket No. 28.

Rounding out the top ten on Saturday night at Thunder Mountain was Max Blair of Titusville, Pa. in the sixth-spot after running as high as third at one point; Darrell Lanigan of Union, Ky. with a seventh-place result after leading 22 laps in the Barry Wright ICON No. 29V; Ricky Weiss of Headingley, Man. finished eighth aboard his Drydene Performance Products No. 7; Matt Lux of Franklin, Pa. took his No. 111L to a ninth-place run; and Doug Drown of Wooster, Ohio came home in tenth.

The World of Outlaws Morton Buildings Late Model Series will resume the 2020 season next weekend with a Friday, October 2 stop at Cherokee Speedway in Gaffney, S.C. followed by a Saturday, October 3 date at 411 Motor Speedway in Seymour, Tenn.. As always, if you can’t join us as the track, you can watch Every Lap LIVE at DIRTVision.com. 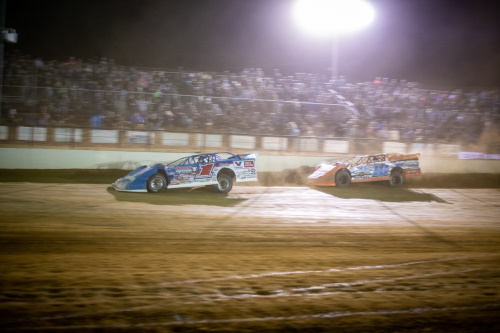