Lexington, Ohio – (September 28,  2020) – What was shaping up to be a run to victory at Mid-Ohio Sports Car Course for Meyer Shank Racing (MSR) drivers Matt McMurry and Mario Farnbacher took a dramatic turn with just 30 minutes remaining. But the determination and focus that the No. 86 Acura NSX GT3 drivers delivered resulted in a fifth place finish on Sunday. 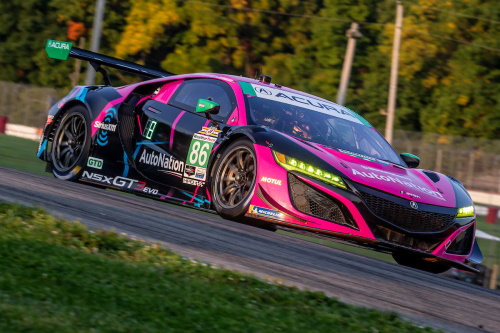 The MSR squad dialed in the No. 86 Acura NSX GT3 through the first two practice sessions of the weekend to be ready for an early morning qualifying session on Sunday. Dealing with completely different track conditions, there were a lot of unknowns for the 15 minute run.

McMurry once again strapped into the No. 86 Acura and hoped to give MSR its first pole position at Mid-Ohio. Taking the entire session to improve his times, it came down to the last lap for McMurry to improve just one one-hundredth of a second to take pole position. Improving nearly a tenth on the final lap McMurry was just shy of grabbing the pole, but his quick lap set him on the front row in second for the start of the Acura Sports Car Challenge. 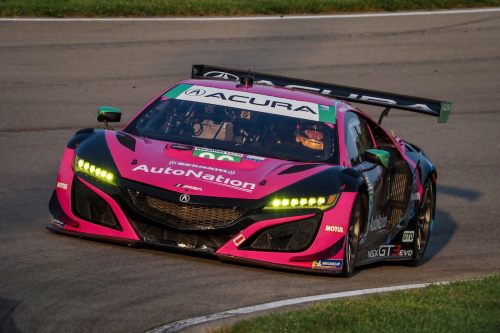 Taking the green flag from the front row, McMurry had a strong first stint to pull away from the field and keep a steady gap to the lead car. The first full course caution was deployed on Lap 24, sending McMurry in for his first stop. The MSR crew once again showed precision and speed on pit lane which put the recent college graduate back out into the lead.

There was no looking back once McMurry took the restart from the lead, holding that position for 37 laps and the remainder of his stint before heading to pit lane during the second full course caution on Lap 66 to swap the position with Farnbacher.

Set to restart from third, Farnbacher was able to capitalize on a bad run from the 76 car to move alongside as the two passed the start finish line. Unfortunately, several hits by the competitor along the straight sent Farnbacher into the gravel with a damaged right front wheel.

Frustrated but determined to finish, Farnbacher limped the No. 86 Acura around the remaining 13 corners back to pit lane to replace the broken wheel. Quick work by the crew sent Farnbacher back out without losing a lap.

For the remaining 25 minutes of the race Farnbacher focused on getting back as many positions as possible, with every position providing valuable points towards the GTD championship, which Farnbacher and McMurry led coming into the Mid-Ohio weekend. 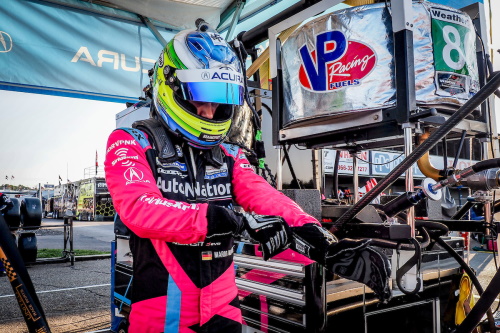 Making an aggressive charge, Farnbacher advanced four positions at the checkered to finish fifth. Provisionally, McMurry and Farnbacher still hold the championship lead (176-173) as they look to bring MSR a second IMSA championship.

MSR will head to the Charlotte Roval for the next round of IMSA competition on October 16-17.

“Today was a tough day. Starting off, Matt has an absolutely amazing weekend. His improvement with the NSX is exactly what we want to see from him. He had his best qualifying run, ran up front for his entire stint – he did everything that we asked him to do. Unfortunately, when Mario got in the car we had an incident with the McLaren that really hurt our track position. Mario did what he needed to do to get back up. Fifth is not where we wanted to finish, so we really need to focus on getting a strong result in Charlotte.”

Matt McMurry:
“That was an unfortunate end to what started out as a great race. I had a good start and held my place until the first FCY, where the boys did another awesome pit stop and we jumped into first place. From there the Acura NSX was solid and I could push hard to maintain first place for a long time. Some crazy driving from the McLaren just after Mario got in put us down the order but Mario did a great job recovering and got us back to P5. As always the team, the car, and HPD were great and gave us everything we needed to go for a win.”

Mario Farnbacher:
“Matt had a great opening stint. We were close on fuel so it was a tough call on when to come in during that second stop. But, we were really tight on fuel so it was a tough call. I think that without that, we could have finished second or third which would have been really good points. We tried to recover after we had our front right tire destroyed from someone else. When I got back out on track, I think the car was pushed to the maximum and we really gave it our all. We’re hoping that Charlotte will be better.