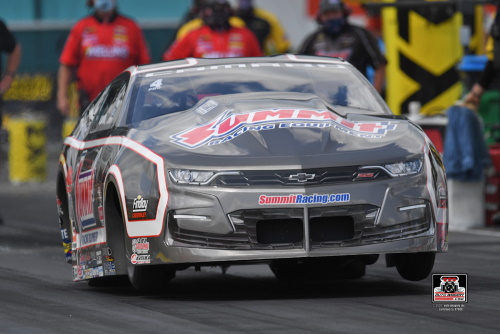 GAINESVILLE, Fla. (September 28, 2020) – The Pro Stock point battle continued to sizzle at this weekend’s 51st annual Amalie Motor Oil NHRA Gatornationals. Jason Line, driver of the silver Summit Racing Chevrolet Camaro, was just 11 points out of the top spot heading into the event at Gainesville Raceway, but a semifinals finish pushed Team Summit into the lead.

“Oh, it’s a battle right now, for sure. This has definitely been one of the most interesting seasons we’ve had, both on and off the racetrack,” said Line, who is racing in what he has deemed his final season as a Pro Stock driver. At the end of 2020’s NHRA Mello Yello Drag Racing Series, Line will transfer his focus solely to the engine and dyno rooms at the KB Racing shop, making this abbreviated season his #FinishLineTour.

With just four races remaining before the champion is crowned, Line and his Summit Racing teammates know that they have to make the most of every run down the racetrack. That was tough this weekend in Gainesville as the weather was quite unkind. The air was soupy and boiling with moisture all day Saturday, and although the sun graciously dipped out of sight on Sunday, a new challenge was presented as ominous dark clouds hung overhead while still more humidity wrecked the air.

“I was ready to go with my head, but my leg wasn’t,” said Anderson. “Those two have to be on the same page, or you’re in trouble. It was a rookie mistake, unfortunately, but the good news was that I had a good racecar with my Summit Racing Chevy, and my teammate has the points lead.”

Line had his fate in his own hands in the second round, as incoming points leader Erica Enders was in the opposite lane. The silver Summit Racing Camaro was off the starting line first, thanks to Line’s efficient .016-second reaction time, and Enders tried as she could to make up the difference from her tardy launch, but at the finish-line stripe it was Team Summit shining with a holeshot win, 6.651, 206.86 to 6.642, 206.04.

“It was not exactly the day we wanted, and we kind of struggled and never really got a good handle on the racetrack all weekend – but you’ll have that,” said Line. “The good news is that we made up a little bit of ground and moved into the points lead. That’s nice to have, but we’re not going to fixate on that right now. The goal from here will be to hang onto it, obviously, and I think my Summit Racing Chevy is only going to get better and better.”