GAINESVILLE, FL (September 28, 2020) – It took almost seven months but Terry McMillen and the AMALIEⓇ Motor Oil Top Fuel team finally delivered for the NHRA AMALIE Motor Oil NHRA Gatornationals fans. Today in front of an impressive crowd at Gainesville Raceway McMillen raced to a semifinal finish before being upended by eventual runner-up Billy Torrence. The day was one of solid progress and a big-time upset for the team from Elkhart, Indiana. 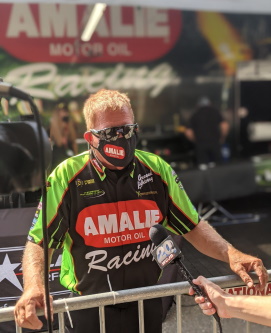 “We were ahead in that semifinal race against Billy Torrence and then it just dropped a cylinder at like 1.5 seconds out,” said McMillen, driver of the AMALIEⓇ Motor Oil XTERMIGATORⓇ Top Fuel dragster. “It started spinning the tires. It just didn’t work out. It has been a great weekend. We put on a great show in front of our AMALIE Motor Oil family. It was a successful weekend but certainly we wanted to go to the final and give ourselves a chance to win. We had the car to get there but we just made a mistake out there and it didn’t like it.”

McMillen and his Rob Wendland tuned Top Fuel dragster struggled in qualifying trying to get a handle on a hot track with only two qualifying sessions. The driver and crew chief combo put their heads together overnight and decided to get aggressive in their first round race with Top Fuel point leader Doug Kalitta. McMillen’s best time of the weekend was a pedestrian 4.72 second run in qualifying and they dramatically improved with a 3.724 second blast to get the first round win over Kalitta. The first round win highlighted some of the positive moves the team made.

“It was awesome to be here because with the Amalie executives out here at the track and our customers it is really good for them to see all this sport has to offer,” said McMillen. “You see the interaction with the fans and it helps everyone understand a little more about what our sport is all about. It is not just about race cars going down the track. We are taking care of the fans who are our potential customers for future sales. That is really important. Getting back here to Gainesville where we started something where we didn’t have the chance to finish was important. We finished it today the best that we could. Overall it was a good weekend we just have a couple bugs we still have to work out.”

In the second round McMillen had lane choice over three-time world champion Antron Brown. Once again the Rob Wendland tune-up was up to the challenge for another round win. His time was slower but it was enough to trailer a tire smoking Brown and advance to the semifinals. The next round did not unfold in McMillen’s favor but with another race this coming weekend the team was taking the positives and moving forward.

“In reality the more you race the more efficient you become,” said McMillen. “It is good for the team and good for everyone. You get a little more information every time. This is like our ninth run on this clutch pack so we are still learning this clutch system we are getting a better handle on it. It throws us a bone every once and a while. In Indy we went 3.72 and first round today we went 3.74 but we have to find consistency. Rob has done a marvelous job of giving us a good race car. The inconsistency of the clutch discs is something we are working through and that is something he can’t control. We have to continue to work on that clutch package.”

McMillen and the Amalie Motor Oil Top Fuel team will be back in action at the NHRA Midwest Nationals at World Wide Technology Raceway with two qualifying session, Saturday, October 3. 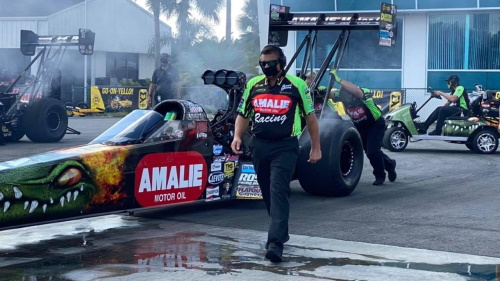