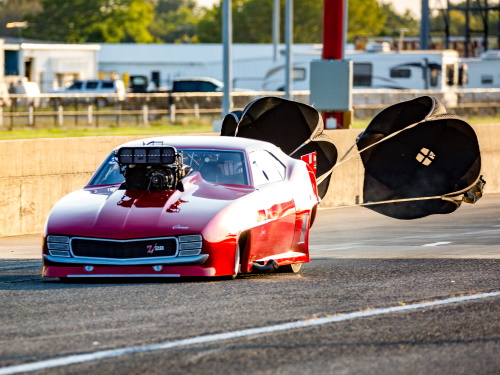 ENNIS, Texas (October 3, 2020) – Former American Drag Racing League champion Jason Hamstra drove his ’69 Camaro to the top of the Pro Extreme charts at the Texas Motorplex Friday night with a lap of 3.608-seconds at 216.65 mph down the eighth-mile track. The opening night of the ADRL US Drags saw near-perfect weather with an even better day expected Saturday. Tickets for the race, as always, are completely free of charge.

The most recent ADRL winner here, Frankie “The Madman” Taylor, was racing Hamstra to be the first driver since the successful relaunch of the ADRL to lay down an official lap in the 3.50-second range. Hamstra got his out of the way early, while Taylor waited until Q3 to make it interesting. The Texan laid down an impressive 3.61, but would’ve certainly made the 5’s had he not been forced to battle an ill-handling race car.

Fan favorite Travis Brandt was bitten twice by qualifying gremlins, forcing him to back his car off the line in both the second and third rounds. Fortunately, he piloted his ’68 Camaro to a 3.693-second lap at 206.64 mph during the opening round of quals Friday afternoon.

Currently, Bill Doucet sits at the bump spot at No. 16 with an ET of 3.87. The Pro Extreme last chance qualifier is scheduled for 3 p.m. local time tomorrow.

Spectator gates open at Noon local time Saturday with a jet car exhibition again capping off a day of drag racing excellence Saturday under the lights!

As always, ADRL tickets are FREE and can be found at a number of area businesses and can be printed at home by visiting ADRLDrags.com. Streaming of this weekend’s event is provided by SpeedVideo.com.

Get the Gear! Missed out on Dragpalooza or the Gateway Drags? Need your ADRL merch? Get everything you need by clicking HERE!