GAFFNEY, S.C. (October 3, 2020) – The storybook season for Brandon Overton seems to only grow with each and every race.

On Friday night, Big Sexy banked his second-straight $10,000 title at Cherokee Speedway’s “Mike Duvall Memorial.” It’s his 21st overall victory of the season and the 12th of his World of Outlaws Morton Buildings Late Model Series career, putting him in a tie for 14th on the all-time wins list alongside Clint Smith, Shannon Babb, and Dale McDowell. 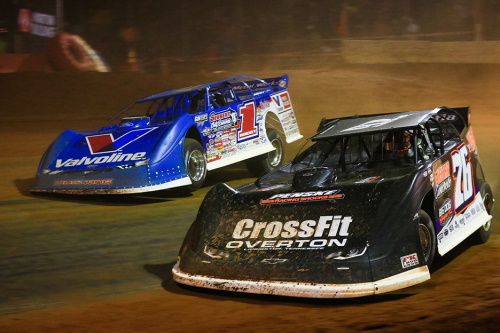 More importantly, Overton’s latest conquest at the Gaffney, S.C. 3/8th-mile extended his mark to a perfect five-for-five with the World of Outlaws since August rolled around. He’s only the fourth driver (Moyer, Lanigan, Sheppard) in the series’ 19-year history to go on such a long, relentless winning streak and now has an opportunity to tie the all-time record of six consecutive wins on Saturday night at 411 Motor Speedway.

The sixth clean sweep of the 2020 World of Outlaws season (Fast Time, Heat Win, Feature Win) only came after some concerns when the Evans, Ga. native slipped back to fourth on lap 23 of the 50-lapper. He quickly rallied, however, and promptly drove the Wells Motorsports, Crossfit Overton, Longhorn/Clements No. 76 by Chris Madden, Ross Bailes and Brandon Sheppard to take the lead on lap 34; a lead he’d never relinquish. 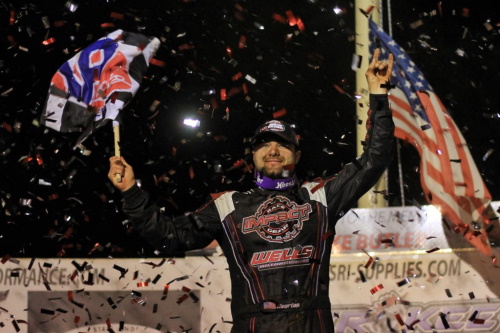 “I’m just so grateful, man,” Overton preached. “I’m grateful for this opportunity to drive top notch cars and I’m grateful for all the people supporting me and this team. I’m having a blast right now and everything is just coming together.”

Winning for the fifth time in 12 starts, the 2020 season has already turned into the greatest statistical season of Overton’s World of Outlaws career, which includes 2015 Rookie of the Year honors. For his latest accomplishment, the budding 29-year old was forced to overcome a lackluster start to Friday’s 50-lap feature at the Gaffney, S.C. 3/8th-mile.

While Ross Bailes of Clover, S.C. chased his second career World of Outlaws win from the pole position, Overton was content with riding in third behind Bailes and Brandon Sheppard, who hoped to snap his cold spell with zero wins at Cherokee. It was Bailes, the May 2019 winner at Cherokee, pacing the first 15 laps before Sheppard snookered him in lap traffic to put the Rocket1 Racing No. 1 to the point.

In the meantime, Overton was caught slipping and dropped to fourth when “Smokey” Chris Madden ran by him on lap 23, forcing the Georgia boy to get up on the wheel; and that he did. Rallying back around Madden on lap 24, then disposing of Bailes on lap 25, Overton ensued to cut a 2.1+ second lead down to nothing when he passed Sheppard for the lead on lap 34.

“That’s the thing about leading, you’re just a sitting duck out there by yourself,” Overton noted on methodically following their footsteps. I told myself I just needed to keep Sheppard in sight and take care of my tires as much as I could. When Madden passed me I kind of panicked because I knew I had to get back by him. Hats off to Brandon and Mark though, they’ve built one of the best teams in the country. Beating them makes me proud of what we’ve built over here.” 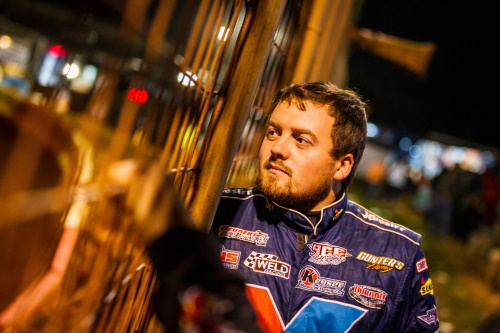 Cherokee is now one of three tracks that Sheppard has ran 5+ World of Outlaws races at without a win. [Tyler Wicks Photography]

Leading 18 laps around the midpoint of Friday’s feature, Sheppard of New Berlin, Ill. was the closest he’s ever been to Cherokee Speedway victory lane. Ultimately, a second-place finish would have to suffice for The Rocket Shepp, who continued to stretch his points advantage with a third-career World of Outlaws Morton Buildings Late Model Series championship looming.

“We had a fast car again, but I just moved out tot he middle one too many times with those lapper and that allowed him to get by me,” Sheppard noted on Overton’s pass for the win. “Once it latched up down there after he got, well that was all she wrote. It’s still so much fun for us to come out and race in front of all these fans. Coming up one spot short sucks, but we’ll come back better tomorrow.”

Rekindling Chris Madden Racing with a new Rocket Chassis No. 44 covered in Drydene Performance Productssponsorship, the Gray Court, S.C. native debuted his new whip in spectacular fashion. Driving from ninth-to-third, the 27-time World of Outlaws winner not only earned a podium finish in his first night out, but also earned hard charger honors for his run through a stout field.

“Starting ninth and coming up to third with a brand new team is pretty awesome,” Madden through of his new situation. “I thought we had ourselves in a position battling for second, but lap traffic didn’t help us. I gotta thank the people that made this happen: Drydene Performance Products, Derek & Mike at Millwood, Billy Franklin, Henderson Amusement, so many others make this deal go round.” 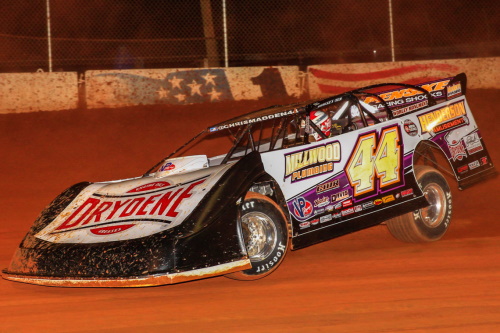 The High Side Tickler Kyle Strickler delivered a career-best result on Friday night, guiding his Bilstein, Longhorn Chassis No. 8 to a fourth-place effort. Trailing him and closing out the top five was Ross Bailes, who led the opening 15 laps aboard his Big Frog Motorsports, Rocket Chassis No. 58 before ultimately slipping to a fifth-place result.

Rounding out the top ten at Cherokee was current championship runner-up, Ricky Weiss of Headingly, Man. with a special cancer awareness design on his Drydene Performance Products No. 7 in sixth; The Bluegrass Bandit Darrell Lanigan of Union, Ky. in seventh-place aboard the Barry Wright ICON No. 29V; Downtown Michael Brown with an eighth-place bid in his new Longhorn Chassis No. 24D; North Carolina’s Chris Ferguson in the ninth spot aboard his Team Zero Race Car No. 22 after going quickest in Group B Qualifying and winning a Drydene heat; and South Carolina’s own Trent Ivey placing his No. 88 in tenth.

Tomorrow night – Saturday, October 3 – the World of Outlaws Morton Buildings Late Model Series moves on to a date at Seymour, Tennessee’s 411 Motor Speedway. With only five points-paying features left on the 2020 calendar, every single race remains crucial in the championship chase. As always, if you can’t join us at the track, you can watch Every Lap LIVE on DIRTVision. 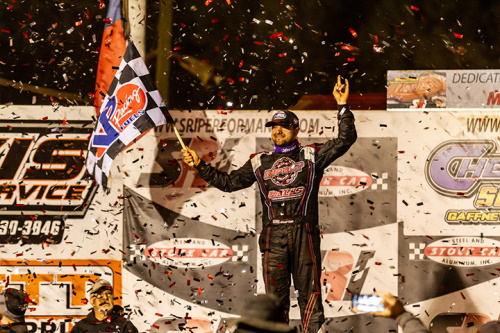