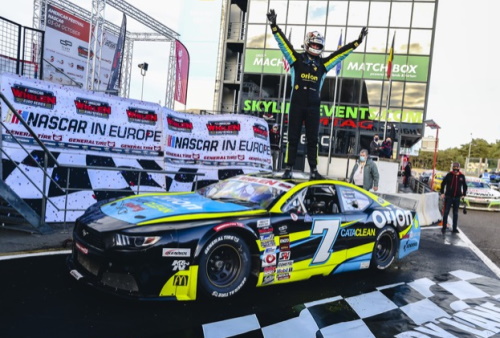 (October 3, 2020) –  Martin Doubek’s dream is finally reality! The Czech started from the Pole Position and led all 15 laps of EuroNASCAR 2 Round 3 to grab his maiden NASCAR Whelen Euro Series win at Circuit Zolder. The Hendriks Motorsport driver mastered a drying track and crossed the finish line ahead of Alessandro Brigatti by more than 10 seconds.

The race was started behind the safety car at the iconic 4 kilometer track in Belgium. Doubek immediately pulled away from his competitors to open a big gap. Afterwards he perfectly managed the tyres and adapted to the drying track to bring home his maiden win in the EuroNASCAR 2 division since first joining in 2015. 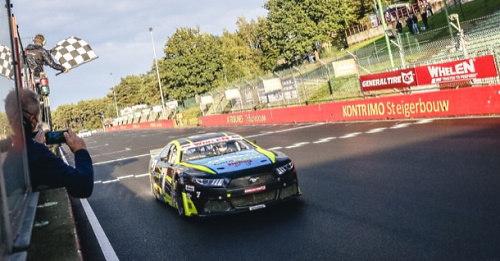 “Finally! I’m so happy to be in Victory Lane here at Circuit Zolder,” said 25-year-old Doubek. “It was also my first time starting from Pole Position and it’s even more remarkable as it was in wet conditions. I’m really happy to grab my first victory here. Tomorrow we will have to see what the conditions are, but I will start again from the pole, so I hope to make it two wins in a row.”

The battle for second place was an exciting one: Brigatti had an intense duel with Nicholas Risitano and overtook his fellow Italian countryman on lap 10. Coming from sixth on the grid, the Feed Vict Racing driver then pulled away and crossed the finish line in second to grab his third consecutive podium finish. Risitano then struggled with his overheating rain tires while the track was drying, but finished third at the wheel of his #12 Solaris Motorsport Chevrolet Camaro.

Guillaume Dumarey was fourth at his hometrack, where he won in 2018. The driver of the #24 PK Carsport Chevrolet Camaro was strong in the beginning of the race and had to adapt his driving style to the changing conditions of the track as the sun came out after a full day of rain.

NWES rookie Julia Landauer showed her great potential at Circuit Zolder after a tough season opener in Vallelunga. The American charged her way up through the field after starting from ninth due to a grid penalty on Friday. In the end, Landauer took fifth place to score her first top-5 result in the official European NASCAR series. She also brought home the first place in the Rookie Trophy and the Lady Trophy.

Francesco Garisto was unstoppable on his way into the top-10: The Italian Shadow Racing Car 42 Racing driver started 14th and was sixth under the checkered flag and second in the Rookie Trophy ahead of Hendriks Motorsport’s Vittorio Ghirelli and PK Carsport’s Pol Van Pollaert, who completed the podium for rookies in the NASCAR Whelen Euro Series.

While Vladimiros Tziortzis ended up ninth, Vallelunga dominator Tobias Dauenhauer suffered a setback and finished in tenth position. The German struggled with the balance of his #50 Hendriks Motorsport Ford Mustang and fell back from 2nd to the last spot inside the top-10.

Evgeny Sokolovsky won the Legend Trophy for Marko Stipp Motorsport by crossing the line in 13th place behind Andreas Jochimsen, who had to serve a penalty after a contact with Simon Pilate, and Massimiliano Lanza. He was joined on the podium for drivers aged 40 and more by Eric Quintal and Arianna Casoli, who was second in the Lady Trophy. For Pilate it was another unlucky race as he was forced to retire for the third consecutive time while showing a very promising pace.

The EuroNASCAR 2 division will be back in action on Sunday with Round 4 of the 2020 NASCAR Whelen Euro Series season. The race will start at 11:20 CEST and will be broadcasted live on EuroNASCAR’s YouTube channel, Facebook page and Twitch profile as well as on Motorsport.tv. 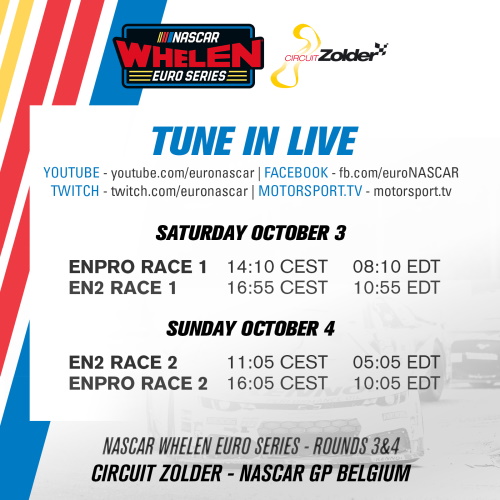