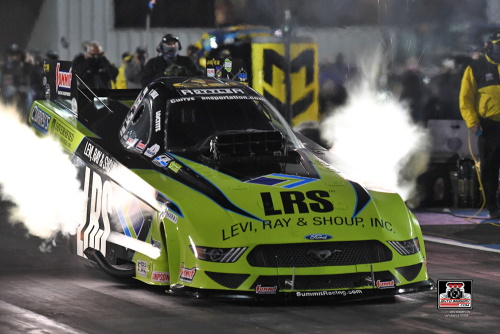 MADISON, Ill. (October 4, 2020) – After qualifying so well at Gainesville Raceway last weekend, Tim Wilkerson and his Levi, Ray & Shoup Ford Mustang nitro Funny Car team were on fire to get to St. Louis and do it again. What they didn’t anticipate, though, was a day full of delays and only a single qualifying pass on a very cool racetrack deep into the evening.

Wilk qualified in the No. 10 spot on a run that barely got him past go, and he will race J.R. Todd in the first round on Sunday.

The racing surface appeared to have lost its “sticky” as the cars before him ate away at it.

“It just got dry there,” said Wilkerson. “People running over it, smoking the tires, pulled up all the glue. On the starting line, it just wasn’t tacky. Daniel being the first pair, it really helped his cause.”

Wilkerson’s son, Daniel, driving a second Ford Mustang for the team, was No. 4 qualifier on a 4.389-second pass.

“We’ll start from scratch tomorrow, and we didn’t do much good today, but I’m pretty happy with Dan’s car,” said Wilkerson. “Anyhow, we’ll see. It’s the same for everybody; we were all kind of in the same boat today. It’s anybody’s race tomorrow – hopefully, it’s ours.”

Eliminations for the Mopar Express Lane NHRA Midwest Nationals will begin at 10am CT on Sunday, October 4, 2020.