It’s only been 36 hours or so since a Friday morning release announced the change for Madden, and in that short span he’s already made himself and his new crew a force to be reckoned with. Yet to miss the podium since switching to his own ride, Madden produced a hard charging third-place effort at Cherokee (S.C.) Speedway on Friday and backed that up with his 28th career World of Outlaws win on Saturday.

“There’s a lot of people in this program here that are very important to me and have helped make this deal work,” Madden gracefully admitted in victory lane. “The Drydene guys have stuck with me through thick and thin; Derrick at Millwood Plumbing helped put this deal together; Billy Franklin for what he’s done helping me got my team going; Jamie with Henderson Amusement has been with me forever; Steve Baker and Mark Richards at Rocket Chassis; Penske Racing Shocks; Durham Race Engines; VP Racing Fuels; Hoosier Racing Tire; this wouldn’t be possible without our supporters.” 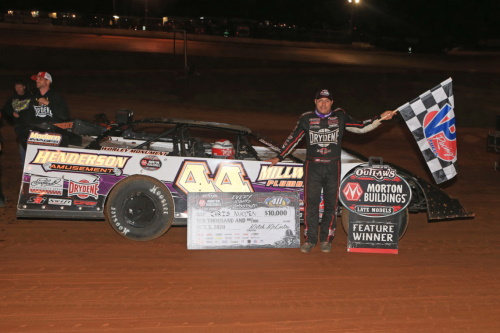 Earning the seventh clean sweep (Fast Time, Heat Win, Feature Win) of the World of Outlaws season, Madden was dominant front the get go on Saturday night. His 19th career Fast Time Award came at 14.319 seconds, more than two-tenths faster than the rest of the field. In Drydene heat race action, he drove off to a whopping 3.469-second win. The hard work transitioned to luck when he then pulled the pole position in the Morton Buildings Redraw.

Slipping to second at the start of the 50-lapper, Madden fell behind as outside polesitter Cade Dillard took the point. The duo ran neck-and-neck for five laps until Dillard took a risk by going to the bottom in turns one and two, a move that allowed Madden to go top shelf and storm around the outside of Dillard’s No. 97 to take command of the race lead on lap six.

A pair of cautions on lap 13 and lap 28 tested Madden with the likes of Dillard, Brandon Sheppard and Ross Bailes lining up behind him on each restart. It was a challenge that the Gray Court, S.C. gladly accepted and knocked out of the part, never allowing either restart to falter his quest for a breakthrough win.

“I was able to use the hill to build our speed and get some momentum into turn one each time,” Madden said on his restart prowess. “We had a great race car all night long. Every single one of the guys has been apart of it. It’s not just me, they deserve all the recognition too.”

A bout with lap traffic in the closing stages almost provided an interesting end to the 50-lapper, but Madden again aced his latest test and held on to take the checkered flag with a 1.158-second advantage. It’s his 28th career World of Outlaws Morton Buildings Late Model Series victory and his second of 2020, marking his first since he won the season opener at Vado (N.M.) Speedway Park in January.

“2020 has been upside down for me, there’s no doubting that,” Madden acknowledged on his trying year. “We haven’t quit though; we stuck it out; we battled hard. My family has stuck behind me through it all and they’ve kept pushing me.” 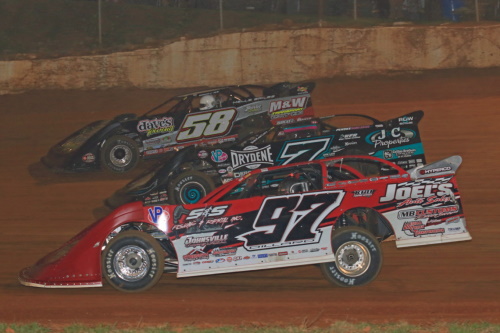 Stealing a runner-up result with a last-lap pass, Ricky Weiss and his No. 7 Team Zero Race Car made it a Drydene Performance Products 1-2 finish behind Madden’s No. 44. Following his sixth at Cherokee on Friday, the Headingly, Man. continued to thrive with his newly-designed car meant to raise awareness for The V Foundation. To score his 18th top five of the year and pull away with the second spot in World of Outlaws championship standings, Weiss had to come from the eighth spot.

“I think this pink and green is the key,” Weiss joked on his newfound stride. “The fans love it and it sure is fast. We’ve been running well lately though, just trying a lot of things to build our notebook with stuff that’ll help down the road. I had a great race with Bailes, running door-to-door for like 20 laps, but I could never quite clear him enough. I thought it would get interesting at the end when I saw that lap traffic up by Madden and then I was able to sneak by Brandon at the end.”

Slipping to third on the final lap, Brandon Sheppard of New Berlin, Ill. collected his 25th podium appearance, 30th top five result, and 35th top ten finish of the 2020 World of Outlaws season. The two-time Morton Buildings Late Model Series champion is only four races away from a third title and he’s a comfortable 294-points ahead.

“This is a great showing compared to what we normally do around here,”Sheppard noted, who has yet to win at 411. “We’ve been getting better at the places we struggle at, so that’s a big plus. We could maneuver all over, but past halfway I couldn’t hit the bottom like I needed to, so I don’t think I could’ve got to him. We’ll take our notes and move on to the next one.” 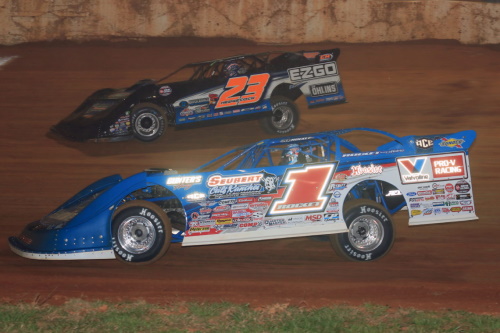 Cory Hedgecock of Loudon, Tenn. continued his remarkable success at 411 Motor Speedway with a fourth-place finish aboard his E-Z-GO No. 23. Closing out the top ten for the second-straight night was Ross Bailes of Clover, S.C. in his Big Frog Motorsports No. 58 Rocket Chassis.

Mike Marlar, the 2018 World of Outlaws Late Model champion, was Saturday’s hard charger with a 14th-to-sixth run aboard his No. 157. Dennis Erb Jr. of Carpentersville, Ill. finished seventh and brought himself within ten points of Chase Junghans for fifth in the current championship standings. Donald McIntosh of Dawsonville, Ga. brought his No. 7M home in eighth-place. Brandon Overton of Evans, Ga. saw his five-race winning streak come to a halt courtesy of a ninth-place bid for the Wells Motorsports No. 76. Cade Dillard of Robeline, La. rounded out the top ten aboard his MB Customs No. 97 after he led the opening five laps.

The World of Outlaws Morton Buildings Late Model Series will have two weeks off before resuming the 2020 campaign with one more weekend in the Midwest. On Friday, October 23, we’re back at Indiana’s Kokomo Speedway to finish the inaugural $25,000-to-win Hoosier Dirt Shootout. The next night on Saturday, October 24, we’re off to Missouri’s Federated Auto Parts Raceway at I-55 for one final tune-up before the Can-Am World Finals take centerstage on November 5-7. 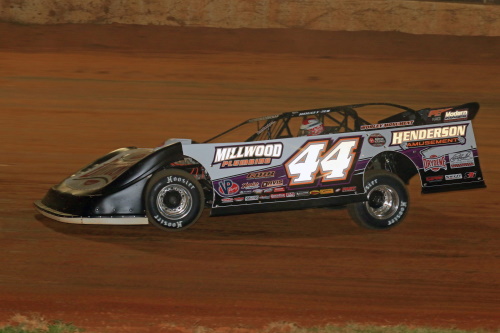