But when given, especially if given in a callous manor, get ready to write the check. And Williams Grove Speedway did. A big one. The biggest check they’ve even written and the biggest one awarded to a Sprint Car driver this year. 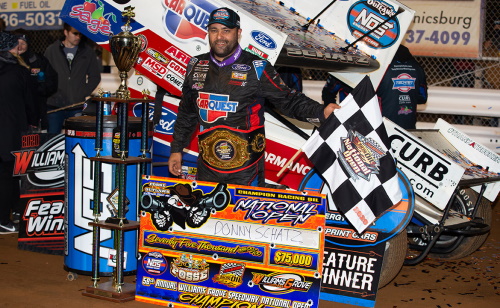 Schatz, of Fargo, ND, won his sixth Champion Racing Oil National Open at this historic half-mile and claimed the $75,000 top prize awarded with it Saturday night.

However, before doing so, he got a little rambunctious with his victory lap and put his CARQUEST #15 into the wall in Turn 3, knocking the steering out of it. All in good fun, though. 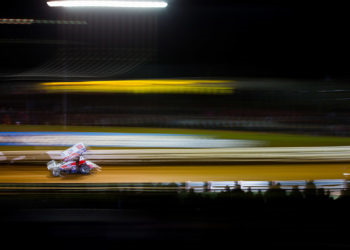 “I was probably pretty excited,” Schatz said. “I was trying to wave at them guys in the infield in Turn 3. They told me that I suck before the race started, so I figured that I would remind them that before that race I was the only five-time National Open champion. Now it’s six. Thank you, guys, for the motivation in Turn 3. That’s just what I needed.”

The win is his fifth of the season and 299th of his career.

Getting to it took patience and aggression. Especially with Kyle Larson lurking behind him in the closing laps.

Schatz won his Drydene Heat Race and then finished fourth in the DIRTVision Fast Pass Dash, which was won by David Gravel, who won Friday’s race at Williams Grove in dominating fashion.

Gravel, of Watertown, CT, led every lap Friday night and won my more than two seconds. That made him a favor to earn his three National Open title on Saturday. However, when the green flag unraveled in the air, Logan Schuchart stole the spotlight.

From the outside pole, Schuchart darted ahead of Gravel off Turn 4 and had the Mesillva Valley Transportation #41 cleared before they entered the first corner. Schatz pulled a similar move on Schuchart’s teammate, Jacob Allen, and stole third before the leaders crossed the starting line.

Schuchart, of Hanover, PA, held command out front for the first 11 laps before a caution dampened his chances of winning a National Open title. Gravel kept pace with the Drydene #1S on the restart and stayed close enough down the back stretch to throw a slider underneath it into Turn 3. He cleared Schuchart off the corner and set course for a weekend sweep. Behind him, Schatz took advantage of Schuchart’s wide exit off Turn 4 to sneak by into the runner-up spot.

“I feel like we made the right decision, starting on the outside there (on the restart),” Schuchart said. “There was a little bit more grip in the middle of the racetrack. I felt like if I could hold David (Gravel) down a bit I could get the jump. He kept getting better and better at it (restarts). The more times he got a shot at it we were even out of (Turn) four.”

Gravel was unable to run away with the lead like he had Friday night. Schatz had a rope hooked to the #41 car and pulled himself closer to it every lap. With 19 laps to go, Schatz snuck underneath Gravel into Turn 1 and pulled ahead of him off Turn 2.

From then on, Schatz made it his race to lose. Gravel faded and Schuchart couldn’t make up ground once he got back to second.

Larson was on the hunt, though. With 15 laps to go, he moved into third. With 14 laps to go, he was second. Initially, Larson was unable to cut into the two second gap Schatz had on him. But with five laps to go, he found a surge. The gap between he and Schatz shrunk each corner. He threw everything he had at the Tony Stewart/Curb-Agajanian Racing machine after passing the white flag.

He looked low in Turn 1. Wasn’t enough. He tried going high in Turn 3, nearly pulling even with Schatz through the corner, but the wall and his right rear didn’t get along. Schatz pulled away with the big win, while Larson had to settle for his second runner-up finish in a row at the track.

“I knew Donny (Schatz) was getting to traffic and he’d went to the top in Turns 1 and 2 to get around somebody there earlier and made it work,” Larson said. “I knew he would do that again. I was just hoping that I would be close enough off Turn 4 to be there to get to his inside when he went to the top. Just wasn’t quite close enough and tried just running the top there to do what I could, even though I knew a miracle was going to have to happen.”

With Gravel finishing fourth, that moved Jason Johnson Racing to the points lead for the team championship. JJR is currently eight points ahead of Sweet’s Kasey Kahne Racing team with seven races to go.

Schatz admitted 2020 has been one of his worst seasons, coming off an eight season stretch of winning 11 or more races. However, winning the biggest Sprint Car event of 2020 has been a welcomed boost.

“Feels good to win that race,” Schatz said. “We tried something in the Dash. Wasn’t all that great but rebounded. “Scuba” (Crew Chief Steve Swenson) changed the car back. He made the right call and did a great job. We’re standing here.” 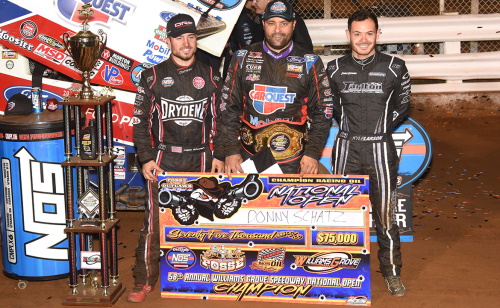