ST. LOUIS,MO (October 5, 2020) – A shortened qualifying effort and brand new race conditions contributed to a short race day for the Strutmasters.com powered by MANSCAPED™ Top Fuel dragster and driver Justin Ashley. The rookie driver and team were racing for the second weekend in a row but in weather conditions that were 180 degrees from the hot and steamy Gatornationals in Florida. With temperatures barely in the 60s yesterday and persistent rain showers Ashley and the rest of the NHRA competitors were only afforded one qualifying run.

Ashley advanced to race day as the No. 14 qualifier and first round match-up with three-time world champion Antron Brown. As both cars launched the Strutmasters.com dragster was down on power with one less cylinder firing. The rookie driver did a great job of keeping his dragster lined up in the groove as he labored down his lane. As Brown extended his lead Ashley knew he could not catch up and lifted to protect his motor.

“This run we lost a cylinder as soon as I hit the throttle. We weren’t able to make it down the track last night. Part of that is being a rookie team and we are having the usual growing pains. I am a rookie driver and I am continuing learn every race. As a team we are learning at every race. The more data we get the better off we will be next race. It is about us learning from the experience and putting it behind us.”

In two weeks Ashley and his team will be back in the middle of his pursuit for a second win this season at the AAA Texas NHRA FallNationals at the famed Texas Motorplex. Ashley is already looking to that race as another step in his learning curve.

“We are moving forward and looking ahead to Dallas. The truth of the matter is and I told the guys this is, ‘What is the alternative?’ The alternative is not racing so you take the good and the bad. We are grateful to be here and we are going to focus on the next race. We are going to stay focused on our goal which is to get better every race,” added Ashley.

With three races left in the NHRA season Ashley sits in the No. 6 position in Top Fuel points and has a legitimate chance at a top three finish with a long shot at his first Top Fuel world championship. During the race it was announced that Camping World would be taking over title sponsorship rights beginning in 2021. As a star on the rise in the sport Ashley is looking forward to a long career in the NHRA Camping World Drag Racing Series. 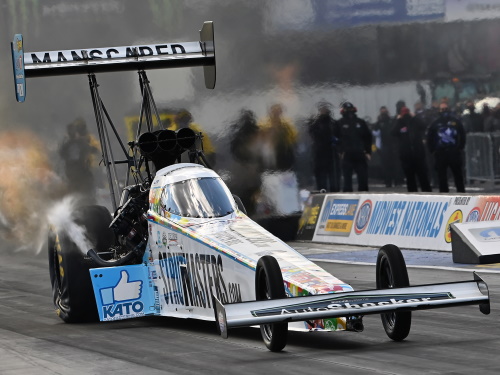 “I would like to welcome (CEO) Marcus Lemonis and Camping World to the NHRA community. We are really excited to have them on board. I think this is an example of how two great organizations can work together in one of the most uncertain times in history. I know the future is bright and we are all extraordinarily grateful to have Marcus and Camping World join our sport,” said Ashley.