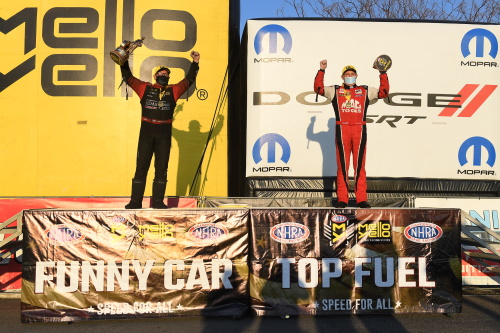 Tommy Johnson (Funny Car) also won at the eighth race of the 2020 NHRA Mello Yello Drag Racing Series season. Due to a unique combination of cold temperatures and wind direction, NHRA officials postponed the conclusion of racing in Pro Stock and Pro Stock Motorcycle on Sunday. The two classes will be completed at an upcoming event.

The race was also highlighted by the announcement that Camping World has partnered with NHRA to become the sponsor of the premier professional series, which will be known as the NHRA Camping World Drag Racing Series.

Kalitta earned his second win this season and 49th in his standout career after going 3.690-seconds at 322.58 mph in his 11,000-horsepower Mac Tools dragster, beating defending world champ Steve Torrence in the final round. It closed the gap between Kalitta and Torrence, who has won two straight world titles, to just two points, setting the stage for a memorable championship battle.

Kalitta reached the final round after getting past Kalitta Motorsports teammate Shawn Langdon, T.J. Zizzo and No. 1 qualifier Tony Schumacher, and is in position to try and win his first career Top Fuel world championship.

“We needed to get some momentum going and this is going to do a lot for us,” Kalitta said. “The conditions were real good and my guys had the car running well today. I’m real proud of these Mac Tools guys. It’s just a big team effort, really. We’re all counting points and figuring out what we can do to get ahead, but the only place you can do it is on the starting line. The championship is the number one prize and we’re hoping to get a couple more wins, for sure. We had a great effort behind us (Sunday) and we’re really looking forward to these next three races. I love running in St. Louis and it’s a good racing town.”

Torrence advanced to his fourth straight final round in St. Louis and 59th in his career by knocking off Kyle Wurtzel, Antron Brown and his father, Billy.

In Funny Car, Johnson picked up a crucial victory to stay in championship contention, going 3.884 at 326.88 in his 11,000-horsepower MD Anderson Dodge Charger SRT Hellcat in the final round to squeak past Matt Hagan’s 3.886 at 333.00. It gives Johnson his second win in 2020 and 21st in his career, and also handed Don Schumacher Racing its 11th straight victory in the class. He advanced to the final round with victories against Terry Haddock, Paul Lee and teammate Jack Beckman, who entered the weekend with the points lead.

Hagan jumped past him by advancing to the final round, but Johnson now trails by just 34 points. Beckman is only 16 points behind Hagan, setting the stage for a thrilling three-car Funny Car race down the stretch. Like Kalitta, Johnson is also seeking that elusive first world championship, and Sunday’s performance means he remains a viable threat in the class.

“This was a must-win,” Johnson said. “You’re trying to gain points on those guys (Hagan and Beckman), so when you do face off with them, it’s a must-win. You can’t let them keep going rounds and keep falling a round behind. It was huge to be able to take out both of them today and keep our team in it, and make it a solid three-man race right now. It’s incredible (DSR) has gone that many races and won. It’s unbelievable and a tribute to all the hard work the guys have done. The semifinal and final were both really tight races and it shows you why the three of us are at the front right now. The racing is so close.”

Hagan advanced to his 63rd career final round with victories against Bob Bode, teammate Ron Capps and Alexis DeJoria.

In Pro Stock, action was stopped midway through the second round, with Greg Anderson and Matt Hartford both picking up wins. Anderson ran a Sunday-best 6.502 at 211.53 in his Summit Racing Equipment Chevrolet Camaro in his second-round victory. Erica Enders was set to race Chris McGaha when the call was made to postpone the rest of racing action in the class. Aaron Stanfield and points leader Jason Line were slated to race as well. That winner will meet Hartford and Anderson will race the winner of Enders-McGaha.

Pro Stock Motorcycle completed its second round of eliminations before action was halted on Sunday. Points leader Matt Smith, who won the most recent race in Gainesville, went an eliminations-best 6.767 at 199.49 on his DENSO Auto Parts/Stockseth Racing EBR to move into the semifinals. Joining him was Steve Johnson, teammate and U.S. Nationals winner Scotty Pollacheck and reigning world champ Andrew Hines. Smith and Johnson will square off in the semifinals, while Pollacheck and Hines will race for a spot in the final round.

Action in the E3 Spark Plugs NHRA Pro Mod Series was also postponed due to the cold temperatures and wind direction. There were no elimination runs made in the class on Sunday. 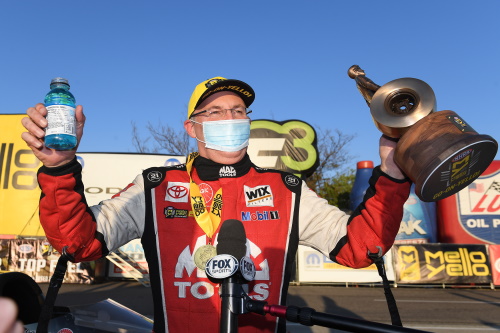 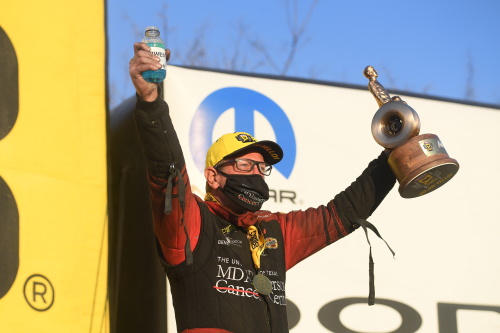 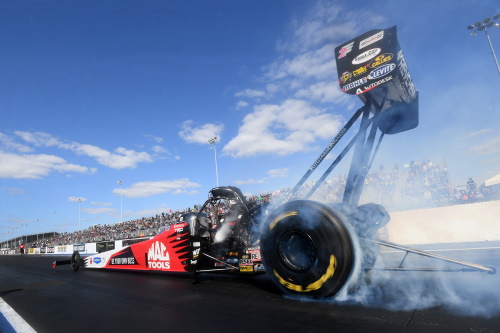 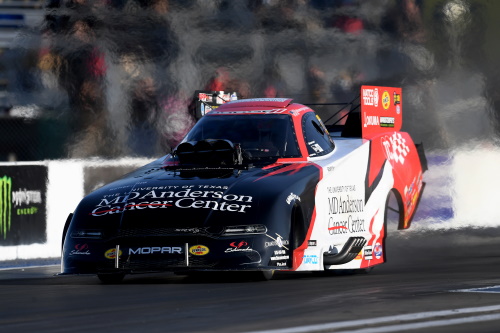 Photos and videos courtesy of NHRA