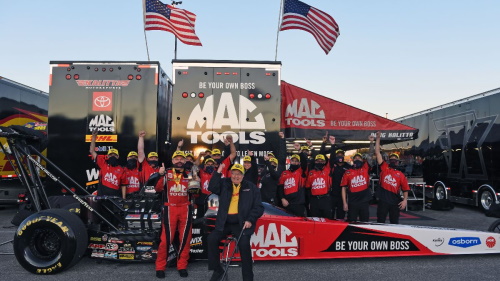 Kalitta and Mac Tools Grab Big Win in St. Louis
Doug Kalitta and the Mac Tools Top Fuel dragster team did what they had to do today at World Wide Technology Raceway winning the NHRA Midwest Nationals for the fourth time and defeating their closest rival Steve Torrence in the final. Kalitta entered race day as the No. 5 qualifier but he knew the chance to go rounds was of utmost importance.

“We needed to get some momentum going for the last three races and this is going to do a lot for us for sure,” said Kalitta, a 49-time Top Fuel national event winner. “The conditions were really good and my Mac Tools Toyota guys had my car running really well. I’m real proud of my entire team and Toyota is a big part of making this car run and knowing what the track is doing. Just a big team effort.”

Kalitta had to race teammate Shawn Langdon in the first round and then take out veteran TJ Zizzo in the quarterfinals. In both of those races he lowered his best elapsed time with a 3.731 second pass and then a 3.709 second run, respectively. The Mac Tools dragster continued its dominant ways making a single run in the semifinals when Tony Schumacher’s throttle stuck and he could not make his run. With no one in the other lane Kalitta did not let the chance to get lane choice in the final round slip through his fingers. His solo run elapsed time of 3.711 seconds proved he would have the race car to beat in the final round.

In a race that would either close the Top Fuel point gap to two points with a win or drop him back 42 points with a loss Kalitta lowered the boom with his quickest run of the weekend, 3.690 seconds at 322.58 mph. The race for the championship will be tight.

“When you’re rolling up to the stage lights, you’re just thinking about the win,” said Kalitta. “But we’re all counting points and we’re all figuring out what we can do to get ahead. But the only place you can do it is on the starting line and you have to have a great effort behind you. I’m looking for.”

The win made Kalitta the second winningest Top Fuel driver at World Wide Technology with four wins. His previous three wins came in 2004, 2003 and 2001.

“I love running in St. Louis. I’m probably one of the few guys that ran over at the paved oval here and the drag strip. So I’ve been coming here for a number of years, as well as in Granite City with the midgets. It’s a good racing town,” added Kalitta.

To get the win Kalitta had to wait out a number of delays because of on-track incidents. The veteran was undeterred by the delays.

“We’re wondering what the delays are really and what’s going on,” said Kalitta. “The Top Fuel cars have a wing on the front and back of these things that you could run across a sheet of ice just about. They really have some downforce. Some of the other cars don’t and the conditions today were tricky for cars without a lot of downforce. The weather conditions aren’t really as much of a concern with my car.”

Today’s win was the 49th of his career and second of the season. The Mac Tools Top Fuel dragster has appeared in four final rounds this season. Those stats are impressive but Kalitta has one goal for this season.

“The championship is the number one prize, but we’re hoping to get a couple more wins for sure. We have three more opportunities. We’ve got three more shots,” summed up Kalitta.

Quotable:
Doug Kalitta on getting a single in the semifinals: “At this point in the game, I’m counting points and I’m thinking — perfect. Let him (Tony Schumacher) run that baby roll down the track and get him off of there so I can run. It’s about all I was thinking. It’s very uncommon, obviously, but it happens. We were the recipient of that opportunity, but we ran well and he was going to have to run good to get us.” 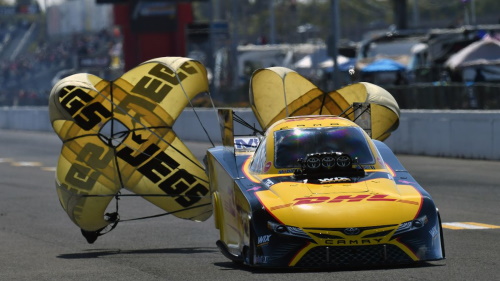 J.R. Todd and DHL Camry Race to Quarterfinals in St. Louis
The DHL Toyota Camry Funny Car team continued to battle at World Wide Technology Raceway during the NHRA Midwest Nationals as they chased a second NHRA Funny Car world championship. During Friday’s qualifying session Todd landed in the middle of the field with a 5.801 second run at 184.98 mph as most of the Funny Cars struggled to make impressive runs in the cold temperatures. The 2019 Midwest Nationals Funny Car runner-up qualified No. 7 and faced a tough first round race against veteran Tim Wilkerson.

With lane choice and the confidence of previous success at World Wide Technology Raceway Todd rolled to the starting line with an eye on victory. The DHL Camry took an impressive lead off the starting line and never trailed in the race. Todd’s winning time of 4.641 seconds advanced him to the quarterfinals and a race against fellow Toyota teammate Alexis DeJoria.

The Toyota Funny Car showdown was anti-climactic at the starting line as Todd’s Camry shook right off the starting line. The 2018 Funny Car world champion pedaled his race car and got it to hook back up and began racing towards the finish line. He did not close the gap but as DeJoria was crossing the finish line her Camry experienced a massive incident shredding her carbon fiber race car body. She got the win and Todd was relieved she escaped serious injury.

“We are going to stay and test tomorrow,” said Todd. “We didn’t give it enough power on the starting line. I am glad Alexis is OK. That was a pretty big issue she had. There is a lot of safety in these Toyota Funny Cars.”

With three races left Todd and the DHL Toyota team will be looking to finish the season strong. Currently No.6 in points and within striking distance of the No. 4 spot gives Todd and the team something to shoot for as they head to Dallas for the NHRA FallNationals.

“We have three races left and there are guys we can go around in the points with some round wins on Sunday. These guys are busting their tails to give me a good race car and we just need a couple things to go our way,” added Todd.

Quotable:
J.R. Todd on heading to the Texas Motorplex: “Billy Meyer built a great race track outside of Dallas. That is where the Toyota headquarters is now so we want to put on a good show. There will most likely be a lot of Toyota people and fans at the race so that will make it fun.” 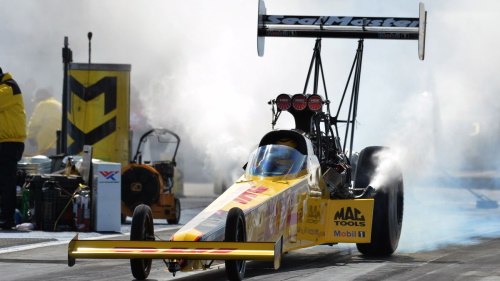 Shawn Langdon and DHL Fall to Teammate in First Round
The DHL Kalitta Air Top Fuel dragster and driver Shawn Langdon tried to make the best of a tough situation during the NHRA Midwest Nationals. Racing at World Wide Technology Raceway under dramatically different conditions than the previous week at the Gatornationals in Florida Langdon was looking for his second consecutive win in St. Louis. On the lone Saturday qualifying session Langdon’s DHL Kalitta Air dragster did not make a representative run and Langdon was forced to pedal his dragster to record a top sixteen elapsed time. His time secured a spot on race day but he was forced to run teammate Doug Kalitta in the first round.

Once again Langdon’s dragster experienced issues on the starting line. As both dragster’s launched Kalitta and the Mac Tools dragster moved off the line without issues but the DHL dragster smoked the tires. Langdon expertly pedaled his race car in the event Kalitta experienced issues he was hoping to chase him down. There was no chance for a comeback as Kalitta blazed down the right lane.

“We just couldn’t get a handle on the track,” said Langdon. “We only got one shot on Saturday and then this morning was just a tough deal. We were ready to race Doug and we are racing for a championship too. You never want to race a teammate early. I am glad he went on to win the race. If you have to beat a teammate you definitely want to go all the way.”

Quotable:
Langdon on racing Doug Kalitta: “Doug is one of the toughest competitors out here. He is a great teammate but you definitely want to give him your best. I hated to race J.R. in the early rounds when we were in Funny Car together and it is just as painful to race Doug in the first round.”