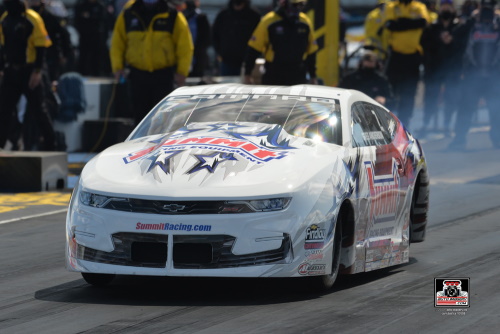 MADISON, Ill. (October 5, 2020) – No one who attended the 9th annual Mopar Express Lane NHRA Midwest Nationals will ever forget it. The race, held at Wide World Technology Raceway on the outskirts of St. Louis, was uneventful on Saturday as qualifying was delayed by rain until it was simply too cold to make passes. The field was set on points for the first time since 2000 – points leader and Summit Racing Chevrolet Camaro driver Jason Line was awarded the pole – and the weather forecast appeared ripe for blasting track records on Sunday.

Raceday proved to be too cold and windy, though, and the conditions made safety uncertain for the Pro Stock cars, which have very little downforce. Teams made adjustments to their racecars to accommodate, but there was only so much they could do. After Kenny Delco got loose in the first round and barrel rolled his car next to Greg Anderson, scrutiny of the situation intensified. Racing continued into the second round, but only halfway as the first two pairs were clearly impacted by conditions that were not improving.

NHRA announced the decision to stop the race and send Pro Stock, Pro Mod, Pro Stock Motorcycle, and Factory Stock Showdown classes down the road to finish at a later date. The date and location have not yet been announced, but with three races remaining on the schedule before the 2020 season concludes, eliminations will likely be concluded in Dallas and/or Houston. Currently, the NHRA Finals are slated for Las Vegas on Halloween weekend, COVID-19 restrictions permitting.

“But when you step back and look at it, I guess it was the right decision. I’m very happy we survived and have a chance, still, to win this event, but I’m sad that we couldn’t finish. It’s not a lot of fun trying to drive down the racetrack like that, but then again, it’s a huge challenge – and I like huge challenges. I was up for it, if we were going to keep going. We would have kept trying, kept working to make our cars better to get down that track.”

KB Racing-powered Matt Hartford clocked a 6.521, 210.44 to defeat Alex Laughlin’s 6.562, 208.26 before the round was halted. Line and Aaron Stanfield, as well as Erica Enders and Chris McGaha, have yet to complete their round-two matches. The winner of the Line-Stanfield meeting will face Hartford in the semis, and the victor in the Enders-McGaha race will square off with Anderson.

“It’s been an unusual weekend, to say the least,” said Line, who was three marks ahead of Enders in the Pro Stock standings after the qualifying order was set. “I can’t say that I’ve ever seen anything quite like it. I would have liked a win at this track, but the good news is that we’re still in. We still have a chance for the trophy, wherever the next few rounds take place. I’m looking forward to it. It’s certainly making my last year of racing Pro Stock interesting.”

The next event on the 2020 NHRA tour is the AAA Texas NHRA FallNationals at Texas Motorplex near Dallas, Oct. 14-18.

Quote:
“It’s just typical 2020, and we sure hope 2021 is better. It was bad for everyone, but we still have a few races left. Man, I feel like our Chevy Camaro is so good. It’s really coming around, and I’m not giving up. As of right now, we have three races left. We can still get a win in.”

*Provisional until event is concluded