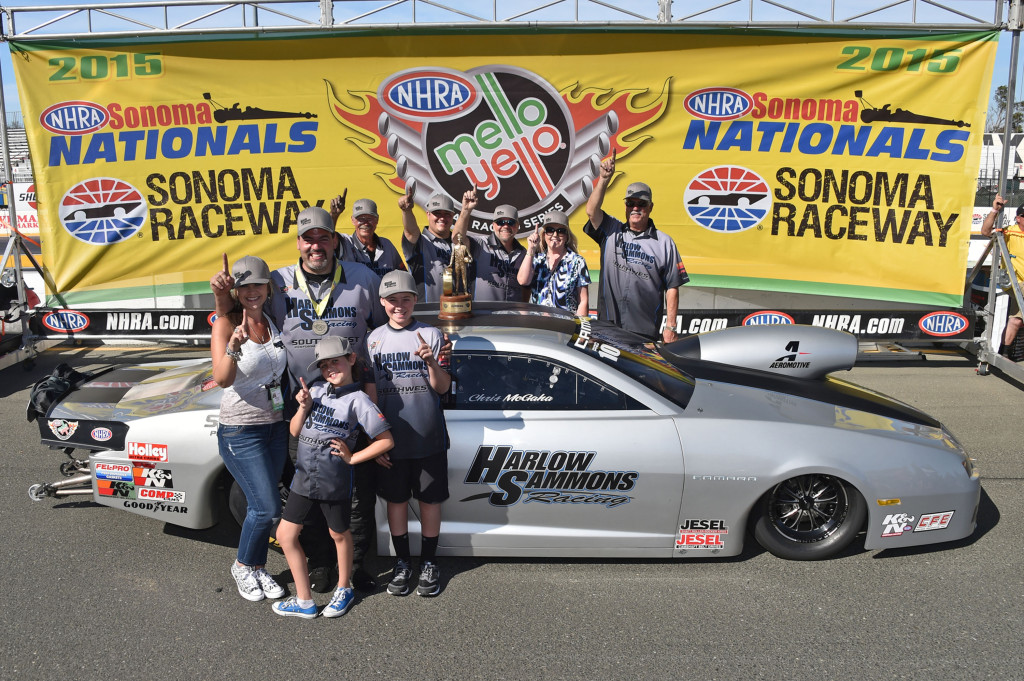 SONOMA, Calif. (Aug. 2, 2015) – Chris McGaha and the Harlow Sammons Racing Pro Stock team couldn’t have had a better weekend at the 28th annual NHRA Sonoma Nationals. McGaha, driver of the swift silver Harlow Sammons Chevrolet Camaro, earned the sixth low qualifier award of his career and topped off the weekend with his very first Pro Stock win. It was a dream that McGaha and his team had long wished for. 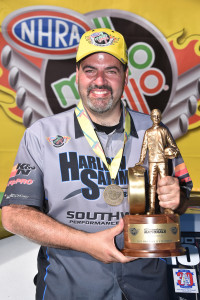 “This was 30 years in the making, and let me tell you, it’s been something,” said McGaha, a former Comp Eliminator driver in NHRA’s sportsman ranks who made his Pro Stock debut at the 2011 U.S. Nationals in Indianapolis and ran a limited schedule until he upped the game to full-time Pro Stock racing in 2014. “All the years we ran Comp Eliminator, watching my dad race and then doing it myself, you always leave the house thinking that maybe this is the weekend. We kept coming out here and trying and trying all these years, and we had a few heartbreakers along the way. To finally get it done is really special.”

In the second round, the Harlow Sammons Chevy campaigner had a very tough draw. In the opposite lane was Erica Enders, a driver that NHRA statisticians have on record as beating McGaha all but once on Sunday in 11 prior meetings. In the most recent two years, the two have met six times, including in the Houston final earlier this year. Each time, Enders waltzed off with the win light – but not this time. McGaha was fired up and cut a .029-second light to her .022 and powered ahead in his Silver Bullet for a killer 6.514, 212.13 victory that was low elapsed time and top speed of the round.

It didn’t get easier in the semifinals, where McGaha came up against Pro Stock returner Jeg Coughlin, a multi-time champion and one of the notoriously quick leavers in the category. Coughlin had nothing for McGaha on Sunday in Sonoma, however, and Team Harlow Sammons watched in awe as their driver launched with a determined .004-second reaction to his opponent’s .010. McGaha finished the job at the top end with a 6.531 at a strong 212.29 mph that just barely missed top speed of raceday.

The final pitted McGaha against second-year driver Jonathan Gray, a familiar foe as the two grew up running around the same sportsman racing circles as their father’s competed against one another. Again, McGaha was on his game with an efficient .024-second reaction time to Gray’s .016, and the charging Silver Bullet quickly made up the difference. The win light flashed in McGaha’s lane as he tripped the final timer with a 6.531, 212.13 to a 6.560, 211.03.

“I knew I was going to win as soon as I put it in high gear,” said McGaha, currently No. 4 in the Pro Stock points. “That’s the same point I knew I’d won the second round and third round, too. You can just see it out the window. That’s why I’m so hoarse; I started yelling on that last one. I knew that unless something happened to the motor, it was mine. I could just see it, and I’ll never forget that picture in my mind, that feeling of knowing I had it. I finally had it.

“This is like getting the monkey off my back, and I hope it turns into the same thing that happened with the No. 1 qualifiers. I wanted one, then I got it, and it just got easier each time. Hopefully, the same thing happens but I’d take just one. If I never get another win, I’ll be more than content in this lifetime.”