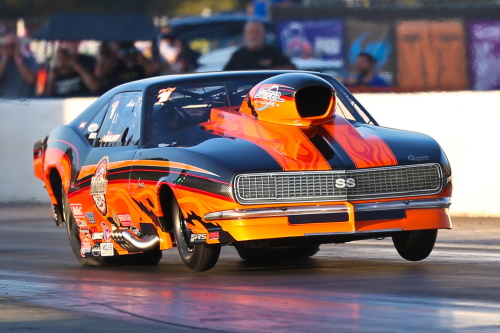 The first of two final races in Jim Halsey’s first Pro Nitrous world championship defense season is off to a strong start, as the longtime nitrous Pro Modified wheelman finished qualifying in the top spot, but perhaps more importantly, one spot ahead of points leader Tommy Franklin. Halsey and Franklin were paired up in all three sessions, and Halsey led all three, closing with a 3.618 at 208.88 in his Fulton-powered ’68 Camaro.

“We put a lot of hard work into this thing over the last few weeks,” Halsey said. “Between testing, racing at Shakedown and earlier today making some pretty good runs, we feel pretty good. That No. 1 spot is nice because I need all the points I can get. Tommy is still a couple rounds ahead of me, so I need to do whatever I can do to catch him.” 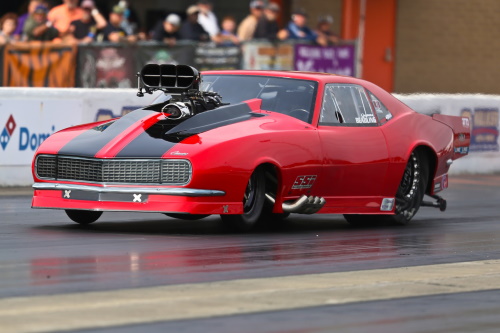 For the third time this season, Pro Boost saw a first-time No. 1 qualifier lead the pack, as Ohio’s James Beadling in his roots-blown ’68 Camaro held off a slew of ProCharger-boosted Camaros. Beadling ran a 3.656 at 204.26 in the first session to shoot to the top spot, then followed it up with a 3.657 in Q2. He sat out the final session when no one else went around him.

“I have a great team behind me,” Beadling said. “Everybody was working hard to keep the car going. Words can’t explain how rewarding this is. I hope this set us up well for race day.” 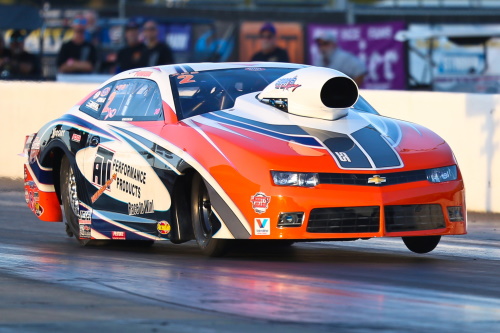 Chris Powers’ third and final qualifying attempt was over before it started, as his parachutes shook loose during the burnout, preventing him from making the run. But the 4.035 at 178.42 he recorded in his Sonny’s-powered ATI Performance Products ’14 Camaro in the second session held as the quickest pass of the day.

“We’re real happy,” Powers said. “Chuck [Samuel]’s done an awesome job on this car. Sonny’s really been working with us here over the last six weeks. We have some power under the hood and got everything running the way it was here last year and we found some more steam. We’re really happy with it. We’re glad to be back on top. We’ll see if we can close it out this weekend and climb back up the hill.”

Tommy Lee, driving the Camaro he usually tunes for defending world champion John Montecalvo, used a 4.045 at 178.83 to earn the No. 2 slot. Points leader Johnny Pluchino qualified third in his Kaase-powered Strutmasters.com ’13 Mustang with a 4.062 at 178.76. 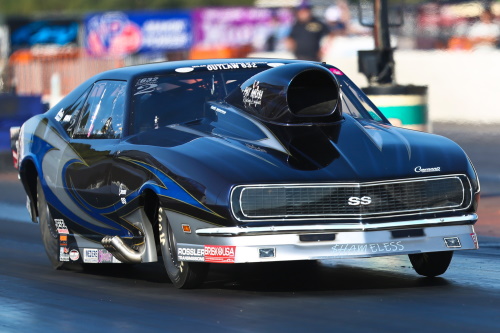 It might’ve taken a few runs for Wes Distefano and his $hameless Racing team to find exactly what their Musi-powered ’68 Camaro was looking for, but the end result was a 4.194 at 172.32 to qualify No. 1.

“We’d been fighting all day, just like a lot of other cars here, battling adversity,” Distefano said. “Whenever you’re able to overcome that, it’s a really good feeling, going from a low to a high. The things we were trying to work on today weren’t working for us to improve, so we went back to what worked for us. We’re gonna need to stick with that and hope it’s enough.” 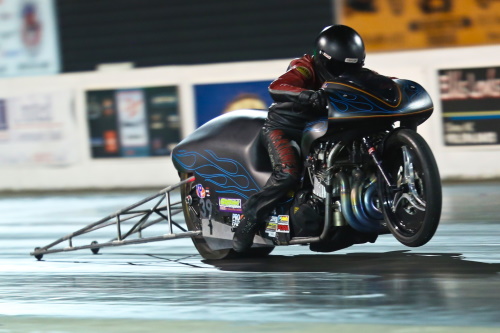 In just his second appearance of the season, veteran rider Ashley Owens rode his self-tuned, McKinney Motorsports Hayabusa to a class-leading 4.037 at 176.21. He started the day with a strong 4.18 and improved in both sessions that followed.

“We’ve been kind of struggling and hadn’t made as many races this year, so that felt great to qualify No. 1,” Owens said. “It’s kind of a loaner bike so it’s not the bike I normally ride. I appreciate Eric [McKinney] letting me ride it this weekend. It turned out real good. It’s an exceptional weekend so far.”

The Jones family team performed well in qualifying as well, with rider Richard Gadson qualifying second with his 4.041 at 172.65 and Chris Garner-Jones following in third with a 4.048 at 173.61.

TOP SPORTSMAN
Elite Top Sportsman No. 1 qualifier Buddy Perkinson said he was only trying to run in the low 3.70s during the first qualifying session, but a 3.673 at 204.82 popped up on the scoreboard. He’ll need to run within 1% of that E.T. to officially set the new PDRA Top Sportsman record in his Musi-powered LAT Racing Oils ’69 Camaro. John Benoit follows Perkinson with a 3.726 at 204.05 in his Buck-powered ’17 Camaro, while Derrick Brown’s 3.835 at 193.63 rounds out the top three.

New Hampshire’s Nick Meloni drove his Dan Page-built dragster to a 4.244 at 162.49 to lead the second Top Dragster field, which will run a 16-car ladder on race day.

Edelbrock Bracket Bash racers will get one final time trial Saturday at 9:30 a.m., followed by first round of eliminations for Jr. Dragster, Top Sportsman 32 and Top Dragster 32. Professional class eliminations will follow.