PORT ROYAL, PA (October 11, 2020) — The ink hadn’t even dried on the page before Kyle Larson had another accomplishment to be written in his 2020 book of dirt racing records.

Less than 24 hours after winning the opening night of the Nittany Showdown at Port Royal Speedway on Friday, Larson, of Elk Grove, CA, swept the weekend by winning Saturday night’s $15,000-to-win finale, earning his 20th career World of Outlaws NOS Energy Drink Sprint Car Series victory – tying him with Greg Hodnett for 27th on the Series all-time wins list. It was also the third time he’s swept a doubleheader weekend with the Series in 2020.

“Another awesome race car,” Larson said. “Can’t thank everybody enough. There’s a lot of people that help (owner and crew chief) Paul’s (Silva) team do what we do, and we can’t do it without them.”

His victory didn’t come without a pinch of luck, though. While Larson had the dominate car Friday night, Brent Marks, of Myerstown, PA, did what few have been able to do all year during Saturday night’s race; he passed Larson for the lead.

It first took 27 laps of eye widening racing to get to the point. 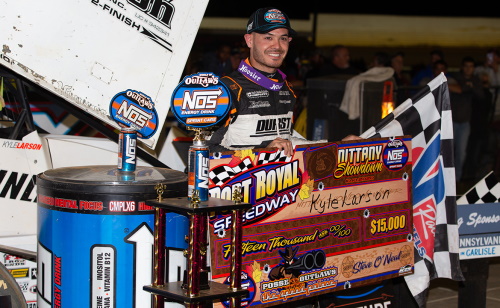 PA Posse members Lance Dewease, of Fayetteville, PA, and Anthony Macri, of Dillsburg, PA, lined up on the front row, poised to end the Posse’s losing streak against the Outlaws this year and not be shutout of a win for the first time since 2008.

When the 30-lap Feature commenced, Dewease pulled ahead with the lead and Larson wasted little time to catapult himself from fourth to second on the opening lap. Dewease used the clean air to his advantage and gapped Larson by about a second in the opening laps. However, he almost lost everything when he hit the wall in Turn 2.

Keeping his throttle control and steering in line, Dewease was able to recover from his mistake and continue with no issues. The only problem it presented for him was it allowed Larson to close in. And once Larson had Dewease within reach, his charge was imminent.

Larson and Dewease waged a two-lap war for the lead on Laps 9 and 10 before the Finley Farms #57 prevailed as the victor. The race was now Larson’s to lose.

On a restart with 14 laps to go, Marks was poised to be the one to make Larson lose it. He powered around the outside of Sheldon Haudenschild to take third and then made quick work of Dewease to steal second. Larson pulled away to about a second lead, but Marks had the high side mastered and cut a tenth of a second off Larson’s lead each lap. And once lap traffic came into play, Larson’s reign at the front started crumpling.

Marks, a Posse member that used to be a full-time Outlaw, was on the hunt for his first Series win in 2020 and to end that Posse losing streak. With three laps to go, he held the key to accomplish both feats. But before he could get a grip on it, a caution took it away.

Larson got held up by the lap car of Spencer Bayston while trying to pass him around the bottom, giving Marks a surprising run around the top to power around Larson for the lead down the backstretch. Seconds later, yellow lights flashed around the track for Kerry Madsen, who stopped on the track with a right front issue. With the lap no completed, Larson was able to keep the lead for the restart.

“I’m a little disappointed but it’s hard to be disappointed with second with the World of Outlaws, especially against Kyle,” Marks said. “For once we had a better car than he did. It just didn’t work out. It’s all good. I’m really proud of our team.”

When the green flag waved for the final time Saturday night, Larson launched ahead of Marks on the start and pulled away to his 12th Series victory of the season in 24 starts and 41st dirt racing victory in 81 starts this year.

“I definitely got really lucky there,” Larson said. “Marks surprised me when he ripped around me. Honestly, I thought Lance (Dewease) would be the guy coming. I peeked back and I could see someone was running the middle and I thought it was Lance. I should’ve peeked at the board I guess and seen the 5 (car of Marks) was coming and I would’ve known where he was running. I would’ve been more aggressive when I got to traffic. I got lucky and I’ll take it.” 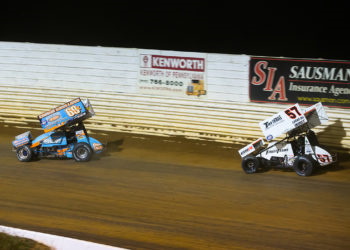 “It’s nice just to go forward,” said Schuchart, of Hanover, PA. “We’ve been so consistent for so long. And to be at the front of the points, you have to be consistent to be up there. Just says how are team is running. For the last few weeks, for whatever reason, we’ve been struggling a little bit. But these Drydene guys they keep working hard and we just keeping working at it. You’re going to have good nights and bad nights. Hopefully more good than bad.”

Sweet’s eighth-place finish was good enough to help his Kasey Kahne Racing team reclaim the points lead for the team championship from Jason Johnson Racing. David Gravel, driving the JJR #41, finished 21st, allowing KKR to move to a 12-point lead ahead of JJR.

With five races remaining this season, there’s five more chances for Larson to add a new World of Outlaws record to his book and five more important events to determine the 2020 champion. 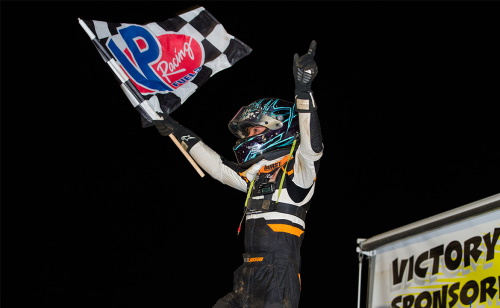