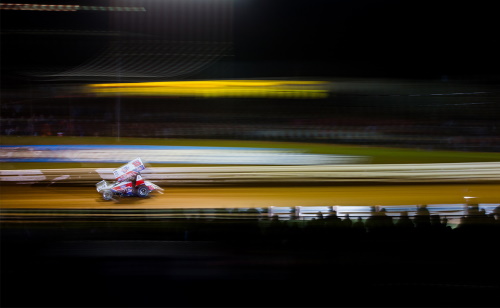 KANSAS CITY, KS (October 14, 2020) — You have to spend time in the trenches to understand what the top of the mountain is like.

At times throughout the year they’ve struggled to find consistency or even the top-10. Now, they’re working to make the climb back up. And they’re doing it just in time for Schatz to go after his 11th World of Outlaws championship.

With two wins in the last three weeks – one being his sixth National Open title – Schatz has strong armed his way back into the championship hunt, currently sitting 68 points behind leader Brad Sweet.

“I’m actually really excited,” Schatz said. “With the year we’ve had, and it feels like the majority of the races we weren’t in the hunt at all, or didn’t have a chance, and here we are. We find ourselves still in a position to go after a championship. We’ve come to life a little bit. That’s refreshing as well. 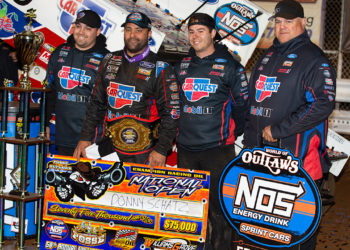 “For 15 years I’ve been in a championship hunt. You don’t ever want to lose that. Here we are. We find ourselves in that again and feeling damn good about it. If we win it, great. If we don’t, we’re not going to hang our heads. It’s been a trying year for everyone. There’s a lot of races we’re going to miss out on because of this COVID stuff. We’ll just do our best to see where we end up.”

Starting this weekend at Lakeside Speedway and Lake Ozark Speedway for the $15,000-to-win Jason Johnson Classic, he has five more chances to complete his climb back to the top in 2020 with the year ending Nov. 5-7 at the Can-Am World Finals at The Dirt Track at Charlotte.

“There are a handful of race tracks that we go to that we might be looking for the rain cloud over head but Lake Ozark and [Lakeside Speedway] aren’t anywhere near those tracks,” Schatz said.

He picked up his second win at Lake Ozark Speedway in May and last year he brought a Ford engine back to Victory Lane with the World of Outlaws for the first time in 21 years at Lakeside Speedway – his second win at the 4/10-mile speedway.

He won with the new FPS 410 in his third race with it and while he’s picked up five more wins with it under the hood this season, the continued development of the engine has created a few challenges.

“The thing people don’t realize is when you do this motor development, when things need changed, it’s not as easy has, hey, we take this off, go up in the trailer and drill a hole and move this and that,” Schatz said. “It doesn’t happen like that. We had to start with a block and heads and all of these things from the ground up. It’s all original still. It’s not just as easy as we need to change this. You can’t just do that with a cylinder head. It takes a casting change. We ran into a problem where we couldn’t get heads for 12 months because the foundry was closed. We had to change foundries. All of those things, they’re a long process.

“Twelve months without being able to work with the heads that we have, and we know what changes we need to make. We just can’t do it. We’re weeks away from having stuff that’s different but those weeks fell like eternity when you’ve known for months what needed to be changed. It’s just the way it works. It’s part of it. These guys have done a damn good job of overcoming that. We know the future is a lot brighter than what today is and that’s what keeps us going.”

Schatz could potentially see a few long-standing streaks come to an end this season. He would need to win the five remaining races to hit double digit wins this year. The last time he was unable to hit that mark was in 2011. For the past 14 years he’s finished first or second in points. At the moment, he’s third in points with a 36-point deficit to second-place Logan Schuchart.

However, he’s also been able to add to his record book by claiming his sixth National Open title at Williams Grove Speedway – the only driver with more than four National Opens – and is one victory away from a 300 career win milestone. 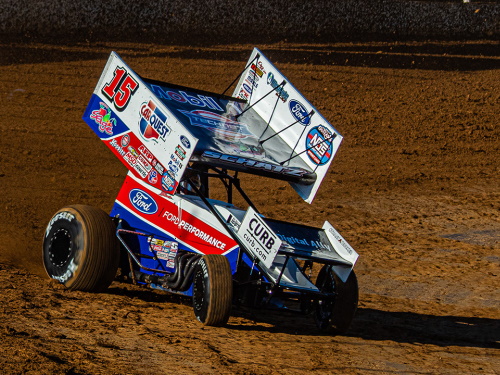 “It’s just like anything else,” Schatz said. “I think 2020 has been an eye opener for every person. For their health. For the economy. For politics. For everything. It’s just been – pardon my French – a shit show from every standpoint. So, it’s not surprising to be in that situation with racing.

“I had someone ask me last week if I’m taking blood pressure medicine. I said, ‘No, I’m not taking blood pressure medicine.’ It’s an honor to be out here. We’ve worked hard to get ourselves in this position. We’re not currently in a position we want to be today, but we will be. And all we can do is work toward that. You have to get past it. You’ve got to spend some time in the trench to understand what the top of the mountain is like. We’ve done that. We’re trying to get ourselves back on the top where we feel like we want to be and where we belong.”

If you can’t make it to the track, you can watch both races live on DIRTVision.