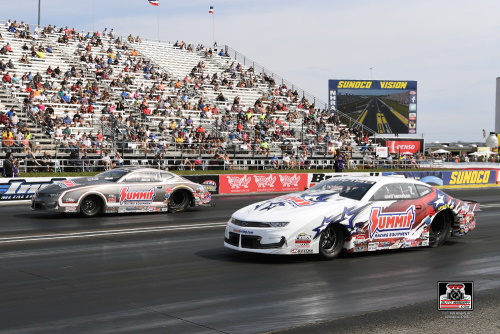 Quote:
“I’m looking forward to getting to Dallas this weekend to defend the title. That was a really special win, a really fun win, and that’s exactly what I need right now – another one just like that. This racetrack has been great for us in the past. We’ll have two opportunities to get a trophy at Texas Motorpolex, and the KB Racing team would like nothing more than to bring both of them back to the shop for team owner Ken Black and Summit Racing. It was disappointing to have to stop the show and leave St. Louis in the middle of eliminations, but that’s in the past. We’ve reset our frame of mind, our Summit Racing Chevys are ready, and we expect great things from this weekend.”

Quote:
“It’s a good feeling anytime you’re leading the points, but the truth is that it isn’t by much, and we’ll have to be better than anyone else if we want to keep that lead. If we do what we’re supposed to do and my Summit Racing Chevrolet cooperates, the points will take care of themselves.”

Butner at the NHRA FallNationals in Dallas
1 win in 1 final round
1999 Won in Super Stock (defeated Jimmy DeFrank)
Last year: Qualified No. 4; second round

Quote:
“Dallas was my very first national event win, in Super Stock in 1999 over my good friend, Jimmy DeFrank. I’m looking forward to this race and then the next, too, because we go to Houston – and that’s where I got my first Pro Stock win. Texas has had a lot of firsts for us, so I look for it to be good again. We only have a few races left, and we sure want another one or two of those Pro Stock trophies. Our Strutmasters.com/Jim Butner Auto Group Chevy Camaro is so good. It’s coming around, and I’m not giving up.”