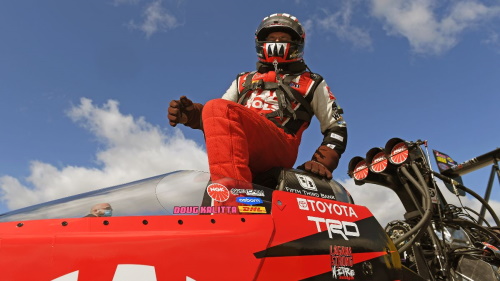 Everyone on the Mac Tools team knew the battle for the Camping World Drag Racing Series Top Fuel world championship would not be easy. In fact the team and driver Doug Kalitta relish the challenge that these next three national events will afford his veteran team. From the top down every person on the crew knows they will have to bring their “A” game to the AAA Texas NHRA FallNationals this weekend at the Texas Motorplex and no matter what happens they will have to be just as ready the next week when the team heads to Houston.

“We are ready for these next three races,” said Kalitta. “The win in St. Louis was a nice boost but these next three weeks will be where we win or lose the championship. We got off of a hot start at the beginning of the season and now I feel like we are in a position to finish the season just as strong.”

Kalitta and the Mac Tools team took the win at the Winternationals and then followed that up with a runner-up in Phoenix. The forced shutdown of the racing season was tough but the team came back at the first event in Indy with another runner-up. Since then the team has been consistent but not dominant until two weeks ago. Kalitta took out teammate Shawn Langdon in the first round and then raced through TJ Zizzo, Tony Schumacher and finally two-time world champions Steve Torrence for the win. The victory has Kalitta in basically a tie for the No. 1 spot just two points from a first place tie.

“That win in St. Louis was big,” said Kalitta. “Every win is important but we wanted that one. If we are going to get the world championship we are going to have to beat the Torrences, Leah (Pruett), and a handful of other drivers. I am not counting out my teammate in that DHL dragster Shawn Langdon either. Anything can happen. I am going to give it my best and we will see where we end up. I am looking forward to getting to the Texas Motorplex for sure.”

Kalitta is one of only six drivers with multiple Top Fuel wins at the FallNationals. Over one stretch he raced to four finals in five years. It has been a while since he was in the winner’s circle but the win in 2013 is still fresh on his mind. He also remembers his first career Top Fuel final round from 1998 at the FallNationals.

“We have won a lot of rounds at the Texas Motorplex. Billy (Meyer) build a great race track. Kalitta Motorsports has a lot of history at that track. This is Toyota’s home track now so we all want to do well. I know there will be a lot of Toyota VIPs at the race. For me I love racing this Mac Tools dragster and Rob Flynn has really been giving me a great race car. We are going to try and get a great qualifying spot and then get four win lights on Sunday. If we do that I will like our chances for the final two races,” added Kalitta.

Quotable: Doug Kalitta on Top Fuel championship battle: “Steve Torrence is a tough racer but that is what you want in a competitor. This battle has been going on for a few years. No matter what happens I know I will have left it all on the track. I can’t wait to run these last three races.” 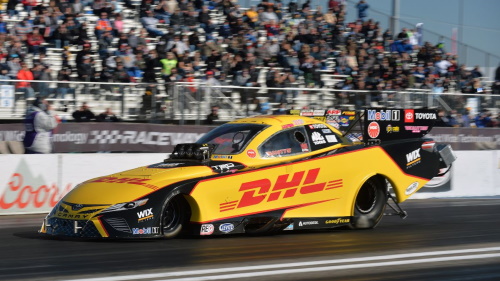 J.R. Todd and the DHL Toyota Camry Funny Car team will be looking to join an elite list with a win at the 35th annual AAA Texas NHRA FallNationals this weekend. A Funny Car win would add Todd’s name to an exclusive list of Top Fuel and Funny Car winners at the historic Fall NHRA national event at the Texas Motorplex. Pairing a Funny Car win with his 2008 Top Fuel victory would add Todd’s name to a list that includes Kenny Bernstein, Don Prudhomme, Ed MCulloch, and Mike Dunn.

“You look at the guys that have won both Top Fuel and Funny Car at the FallNationals at the Texas Motorplex and those guys are all Hall of Famers and Legends,” said Todd. “I remember that Top Fuel win in 2008 and I know how close I came to getting that Funny Car win in 2018. I would love to see four win lights this coming Sunday.”

“I like racing at the Motorplex because Billy Meyer was a racer and built a race track for racers,” said Todd. “It has a lot of cool upgrades for fans but really the track is awesome for the teams. We should have good weather so we could see some record setting times on Sunday morning during that first round. The key will be to have two good qualifying runs on Saturday.”

Todd and the DHL Camry Funny Car are sitting in 6th place in the point standings just seven points behind Tim Wilkerson in 5th. A strong performance at the FallNationals could move Todd up to 4th and with two more races he has a chance to chase down the top three drivers. It will be a tough challenge but one the 2018 Funny Car champion is up for.

“We know we need to perform at these last three races. The top three teams have a pretty big gap but until they tell me the math doesn’t work I am going to do everything I can to get that championship. I have a whole team of DHL crew guys plus Crew Chief Todd Smith and Jon Oberhofer behind me,” added Todd.

Quotable: J.R. Todd on finishing season strong: “We have three races over the next three weeks. It will be a sprint to the finish. I like our chances. We have been in this situation before and I know we can buckle down and get the job done. This DHL Toyota Camry Funny Car can rips off three wins and we will see where that puts us.” 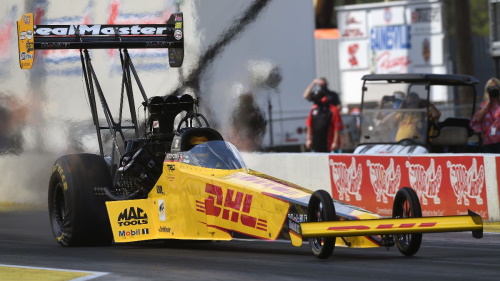 Shawn Langdon and the DHL Kalitta Air Top Fuel dragster are going to use the final three races of the Camping World Drag Racing Series to move up as high as possible in the points and also work to protect teammate Doug Kalitta’s chances of winning his first Top Fuel world championship. Entering the 35th annual AAA Texas NHRA FallNationals Langdon has a longshot at challenging his teammate for the top spot in Top Fuel. He is sitting in 8th place but only one round out of 5th. A top three finish is not out of the question based on the strength of his DHL Top Fuel team’s recent performance.

“We have been running really well,” said Langdon. “St. Louis was a race you can throw out the window because conditions were so crazy for everyone. I am glad Doug got the win there and they definitely earned it. It was tough to race him in the first round but I felt whoever won that round was going to win the race.”

Over Labor Day weekend Langdon got back in the Top Fuel win column by winning the biggest race of the season, the U.S. Nationals. The win kept a Kalitta Motorsports streak alive with either a Funny Car or Top Fuel dragster winning the event the past four years. After two years behind the wheel of a Funny Car Langdon was glad to get a win in a dragster this season.

“I enjoyed my time racing a Funny Car and it was a big challenge,” said Langdon. “I think it made me a better driver because I had to learn so many things it really helped me focus better. I love being back in a Top Fuel dragster though. This is where I came up in the pro ranks and I won a world championship in 2013. I want to get back to those winning ways and I think we can do that over these last three races.”

The first test will be at Texas Motorplex, a track where Langdon has had some success but just not four win lights on Sunday. He has raced to the final round in Top Fuel three times, most recently in 2017 when he fell to eventual Top Fuel world champion Brittany Force. He also reached the final in 2013 and 2010. He has twice gone into eliminations as the No. 1 qualifier in 2012 and 2013.

“I like racing at the Texas Motorplex because it is one of the all-concrete tracks on the tour. When the weather is right you can really put up some great numbers. I know this DHL Top Fuel dragster has the capability to run low and I am excited to get to Texas,” added Langdon.

Quotable: Shawn Langdon on finishing season: “We have three races left and our goal is to win all three. At the very least we want to beat the guys in front of us or close to Doug in the points. We both have great teams and I would love to see either of us get that championship.”