ENNIS, Texas (October 15, 2020) – Heading to Texas after his best run of the season, Cruz Pedregon and team are hoping to repeat his two-time history of winning this race. His win in Dallas in 1992 is one of the most legendary in NHRA history and one that energizes Cruz and the crew.

“Locking up the World Championship here in the early 90’s and the energy that memory holds is our real motivation heading to Dallas this week. It’s something that will forever stay with me and something many NHRA fans remember,” Cruz says. “Testing in Tulsa a couple of weeks ago helped us out in qualifying in the last race, and we plan for it to pay off this weekend where it looks like the weather is going to be a lot more in our favor than it was in St. Louis.”

Cruz’s Snap-on Dodge will be again decked out in The Pink Fund tribute paint scheme in honor of Breast Cancer Awareness Month. Snap-on, the team’s primary sponsor, is dedicating a portion of the sales of a themed promotional mini-diecast set of all six Funny Car paint schemes dedicated to The Pink Fund, bringing its total donation to the organization over the past six years to more than $475,000. Team Manager Caleb Cox says fan reaction to the pink car has been very positive and that the team will run the scheme through the end of the season. For more information, check out ThePinkFund.org. 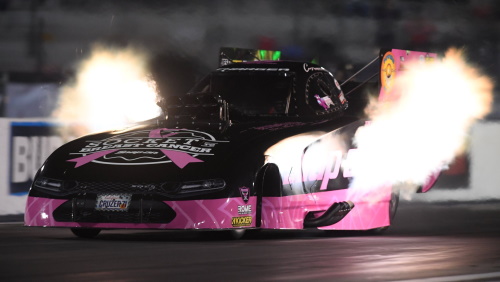