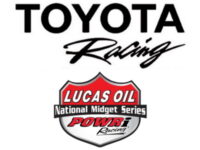 Three additional Toyota drivers joined McIntosh in the top six as his Keith Kunz Motorsports teammates Daison Pursley and Bryant Wiedeman placed fourth and fifth, while NASCAR star Christopher Bell was sixth in his return to his home state of Oklahoma.

Bell started the race in ninth and had worked his way up to fourth by lap 17 of the 55-lap feature only to have his car come to a stop on lap 19. After some quick repairs, he would return at the back of the 25-car field. At that point, he put on one of the most impressive drives of the night, charging back through the field despite non-stop heavy traffic to come home sixth.

The POWRi Lucas Oil National Midget League heads to Oklahoma City tomorrow and will close out its 2020 campaign with a Friday-Saturday double-header at I-44 Riverside Speedway.

Cannon McIntosh: “I struggled with traffic. Every time I got to a back-marker I just couldn’t find a place to go. (After Logan Seavey took over the lead) I could never really get a run going. It seemed like every time Logan would hit every traffic, a yellow would come out. I was glad to salvage a third-place finish”