He bathed in confetti, waved the checkered flag with glee and smiled with pride for every photograph.

However, it was his 36th career World of Outlaws NOS Energy Drink Sprint Car Series victory and his second of the 2020 season. What made it one of his most prized victories is he won driving for his late friend Jason Johnson’s team.

Stewart made his debut in the Jason Johnson Racing #41 car at Lakeside, sporting a red throwback scheme that resembled Johnson’s Knoxville Nationals winning car and kept it up front all night, leading every lap in the Feature.

“What’re the odds of just throwing a guy in car with a team he hasn’t worked with ever and go out and win an Outlaw race,” said Stewart, of Bixby, OK. “It just shows how well prepared this (JJR) race team is. It hasn’t sunk in yet. It probably won’t for a couple of days.” 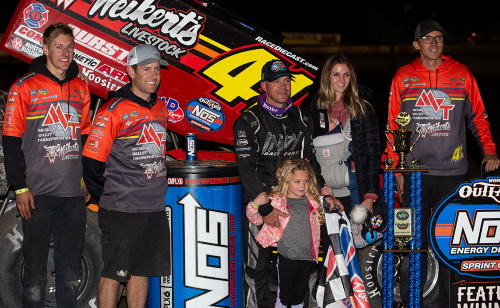 Stewart and the team spent the early half of Friday getting his seat and seat belts fitted in the car, but Stewart felt at home the second he fired up the Mesilla Valley Transportation #41.

They unloaded with speed, qualifying seventh to start the night. Stewart then finished second in his Drydene Heat Race, placing him in the DIRTVision Fast Pass Dash. With the luck of drawing the Dash pole, he went on to win the 6-lap race and claim the pole for the 30-lap Feature.

“Man, I’ve been in so many different cars now,” said Stewart, who has driven for five different teams in 2020. “I know measurements and where my seat needs to be to be comfortable. And it was close. You put your seat in and you change your belts, you really don’t know where you’re going to be until you start it. Once I started it, I knew I was going to be OK.”

When the Feature commenced, Stewart drag raced second-place Daryn Pittman to Turn 1. On entrance, Pittman went high while Stewart hammered his car down into the corner and slid up in front of Pittman by the exit of Turn 2. From then on, Stewart left everyone else to fight for second as he pulled away.

Sheldon Haudenschild made an early run at Pittman for the runner-up spot before fading late in the race. The hunter among the prey for the majority of the race was “The Big Cat” Brad Sweet. The reigning champion and current points leader wasted little time navigating through the field of cars in front of him. He was in the top-10 by Lap 2. He found the top-five by Lap 12. And then made his way to the podium by Lap 14.

Two cautions in that time frame helped Sweet make quick work on his charge forward. They also highlighted the strength of Stewart’s car, which lit a fuse and rocketed ahead of the field each restart.

With three laps to go, Sweet found another gear. He passed Pittman for second and closed to within a car length of Stewart on the final lap.

However, with his emotions in check, Stewart hit his marks and held off Sweet to claim the big win. 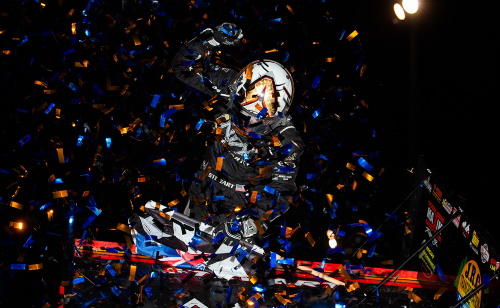 “I knew if someone was going to beat me tonight that they would have to have an exceptionally good car,” Stewart said. You just don’t get cars like that very often. I know why this team is fast. I’ve chased this (#41 car) a lot. In many different cars I’ve chased this car. Hats off to this (JJR) group. You can see they work together so well… Man what an honor to win for Jason and Bobbi (Johnson) and (crew chief) Philip (Dietz).”

With a runner-up finish, Sweet earned his first podium finish in five races.

“I didn’t quite do a good enough job,” said Sweet, of Grass Valley, CA. “We’ve got to do a little bit better to get this NAPA Auto Parts car back in Victory Lane. My guys gave me a great race car for the [Feature]. We just need to get a little better track position and I think we would’ve had a car to win tonight.”

He gained two points on his closest championship contender Logan Schuchart, who finished third after Pittman had a rear end issue on the final lap and fell to 16th. For the Shark Racing driver, it’s his second top-five finish in a row, but he’s again left wondering if it could’ve been better with a higher starting position. 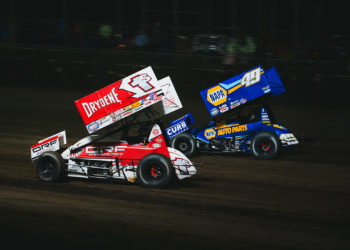 Stewart helped closed the points gap in the team championship with his win – JJR’s seventh win of 2020 – putting the team only eight points behind leader Kasey Kahne Racing. He’ll look to do so again on Saturday at Lake Ozark Speedway for the $15,000-to-win Jason Johnson Classic and win another race in Johnson’s honor.

“Our goal is to try and win that race tomorrow on behalf of Jason and it would be really special to sweep the weekend, but that’s hard to do,” Stewart said. “But what a win. What a win for me. It means a lot.” 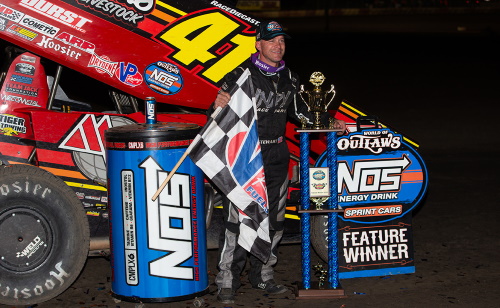