Hagan Will Start from No. 1 as he attempts to go Back-to-Back
in Dallas and Maintain the Funny Car point lead 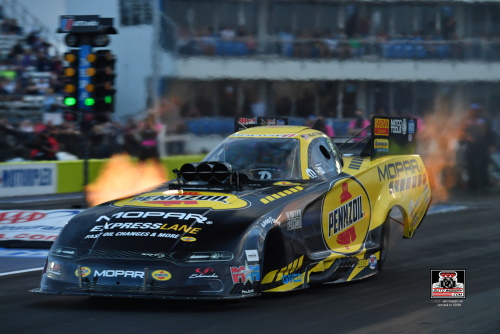 ENNIS, Texas (October 18, 2020) – Starting from the pole position for the 40th time in his career, Funny Car point leader Matt Hagan has his sights set on securing his second consecutive Texas Motorplex victory on Sunday at the AAA Texas NHRA FallNationals.

At the 2019 Dallas event, Hagan raced his 11,000-horsepower machine to the winner’s circle, kicking off what would become an 11-event undefeated streak for the Don Schumacher Racing Dodge Charger SRT Hellcat Funny Car program, and he is hoping history repeats itself on Sunday. Hagan entered the 35th running of the Dallas event with a 16-point lead over his No. 2 ranked teammate Jack Beckman and a 34-point lead over No. 3 ranked DSR Dodge pilot Tommy Johnson Jr. With only three race days remaining in the 2020 season and the points battle heating up, Hagan knows a win at the Motorplex will be critical in helping to achieve his goal of locking-up a third Funny Car world championship.

Hagan’s No. 1 qualifier, his fourth of the season, was achieved when he rocketed the Pennzoil Synthetics Dodge Charger SRT Hellcat to a blistering 3.860-second pass during Saturday’s second and final qualifying session. Earlier in the afternoon, Hagan and the Dickie Venables-led team unloaded with an impressive 3.890-second run in Q1, the second-quickest of the session. The Pennzoil team’s strong qualifying performance allowed them to bank five bonus points for their efforts.

“We made two great runs with this Pennzoil Dodge,” said Hagan, a three-time Texas Motorplex champion. “It was a bit of a cluster up there for the second run. We were trying to make a clutch call and Dickie was trying to put a timing map in, and I was like ‘take a deep breath, it’s going to be alright.’ And it was. I have a great race car under me and I’m trying to drive the wheels off of it and it’s amazing to see all these fans here at the Texas Motorplex and it sort of feels normal and I love it. We’ll try to make four good laps tomorrow and stay in the championship hunt for Pennzoil and Dodge and Mopar and all those who support us.”

Hagan’s quest to pick up the 12th consecutive Funny Car triumph for DSR will begin with a round one match-up versus No. 16 qualifier Todd Simpson. Hagan will have lane choice over his opponent as he kicks off his campaign for a 36th Funny Car trophy, and the chance to keep DSR’s undefeated streak alive. Hagan is a two-time winner in 2020 and finished as the event runner-up at the previous race in St. Louis. Eliminations for the 35th annual NHRA FallNationals start at 10:00 a.m. CT on Sunday.
Qualified: No. 1 (lane choice)

The Competition: No. 16 Todd Simpson 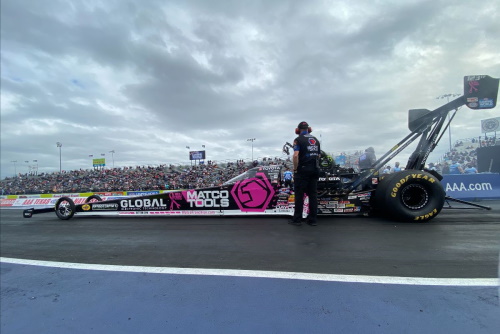 The Competition: No. 7 Doug Kalitta

Quotable:
“It was good and important for us to get down the track on the last lap. The first qualifying round we had a little mishap. It dropped a hole so we had to shut off. We just need to make a clean lap down the track. It’s going to be warmer tomorrow and it’s anyone’s game. We got Doug Kalitta and that’s a good matchup. We need to try to take him out to help ourselves and our teammate, Leah (Pruett), in the points. That’s our main focus. To go down the track in the first round. We have to make a good, consistent lap. I know our Matco boys will keep our heads down and step it up. It’s a new day and we’re excited.” 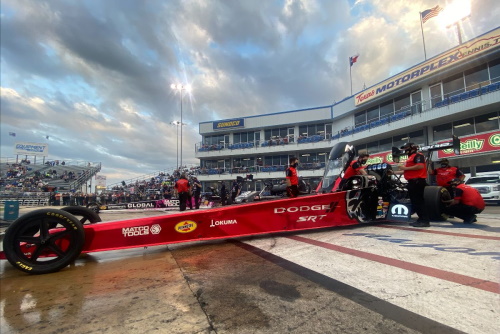 The Competition: No. 10 Scott Palmer

Quotable:
“It was a very progressive qualifying day for the SRT Hellcat Redeye team. Especially after St. Louis and having to front-half a car and put it together for battle this weekend here at Dallas. The first hit we had some fuel system issues and then we made a couple of tuning adjustments and sent it right down Broadway. For me, that was very rewarding after the last race. If you didn’t have any apprehension, you wouldn’t be human. We feel human today and we feel like we got our momentum back and we’re looking forward to hitting four jackpots tomorrow with this Mopar dragster.” 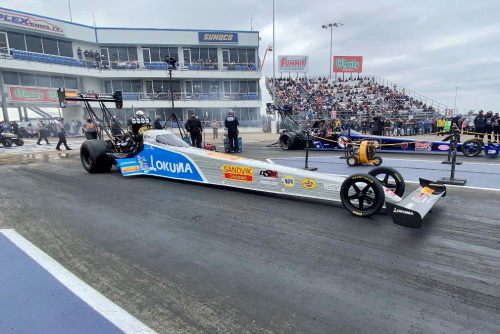 The Competition: No. 12 Joey Haas

Quotable:
“Man, I just love the Texas Motorplex. This place has been a gift to me. Billy Meyer built a superior track back in the day and it’s still one of the best. The stadium seating, I’ve got 30 friends here, many who have never seen a drag race. The all-concrete surface is amazing. For Okuma and Sandvik and Toyota, we’re all family here in Texas. The car is running great. The crew is starting to gel. This is just outstanding. I have two cowboy hats from the past and it be great to add another.” 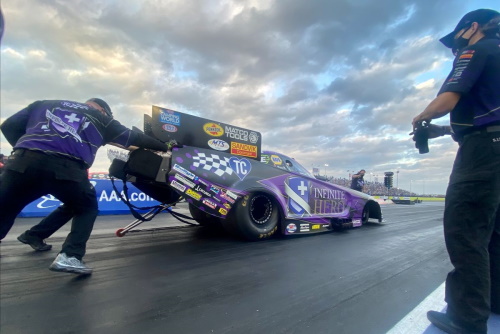 The Competition: No. 11 Cruz Pedregon

Quotable:
“So we unloaded with a nice run and that always takes the pressure off. Even though there’s only 16 cars you always want to qualify well and you want bonus points and we did that on the first run. We tried some different parts on the second run and we’re not quite sure what happened. All of our backup parts should be good and predictable. Something probably didn’t do what it was supposed to do in the bellhousing department. We’ll go back and look at all the data and figure it out and have a hot race car for tomorrow. I’m looking for four win lights for the Infinite Hero Dodge.” 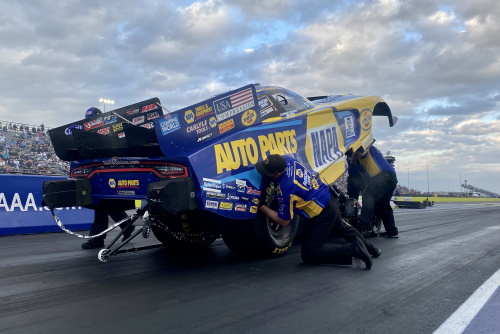 The Competition: No. 13 Terry Haddock

Quotable:
“We certainly didn’t start off the way we wanted to and with this current format with only two qualifying runs on Saturday, you hate to lose one. It actually shook the tires on the first run, but (Rahn) Tobler and our NAPA team tried a few things that we were hoping would increase the performance. It didn’t work on that run, but a lot of times we seem to learn more from things that don’t work than do. Tobler put it back to normal and it went right down the track at a great 3.88 that put us No. 4 in qualifying. That’s a great job to bounce back and that gives us a lot of confidence going into race day tomorrow. We’re looking to make a move and work our way back up in the points.” 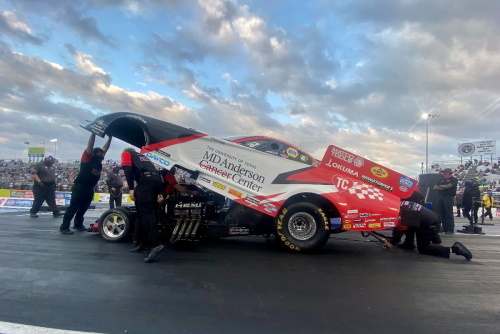 The Competition: No. 15 Jim Campbell

Quotable:
“We were going for it on the second lap and it laid over a little bit on the top end there. No biggie, still two good laps. I knew they were taking a swing as we had nothing to lose. We have a good, solid race car for MD Anderson. We’re strong contenders for tomorrow. We’re in the top half of the field again and we’ve put ourselves in a strong position and we’re doing everything we can to make it a good race day and continue our championship chase.” 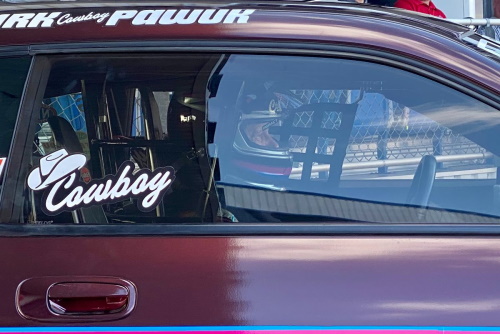 The Competition: No. 11 Scott Libersher

Quotable:
“It was another decent qualifying outing for the Empaco Equipment Dodge Drag Pak with DSR. We qualified sixth. We did ok on Friday, but made a better run today. We made some changes to the car and we were in the top four today. Hopefully the driver does his job and we can continue to go some rounds and rack up some Factory Stock Showdown points. We’re looking to continue the momentum that we started at Indy at the U.S. Nationals and we want to keep it going at these last three races.” 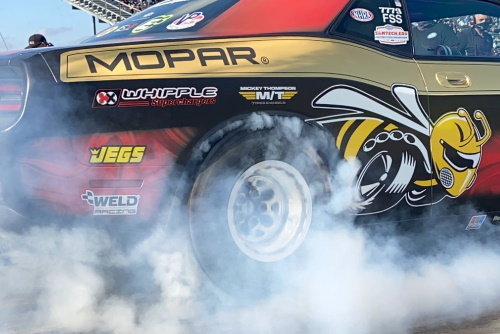 The Competition: No. 5 David Kramer

Quotable:
“We made a lot of major changes between Q1 and Q2, from Friday to Saturday, and we had nearly the same result. Where we qualified was in the No. 12 spot. We know what our handicap is and we’re not able to adjust for that this season. We will try to put as much power to the ground as we can and Mark’s (Pawuk) car is carrying the Mopar flagship and it’s important to keep him fighting for the Factory Stock championship. I love this class. It’s a lot of fun and I love running for Mopar and to compete and win.”