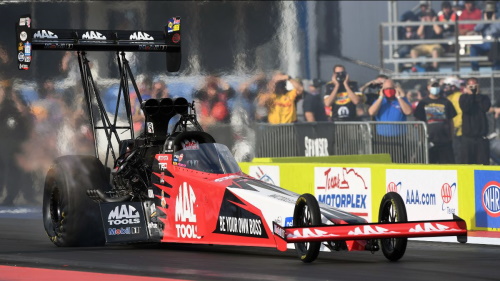 Exiting the 35th annual AAA Texas NHRA FallNationals Doug Kalitta and his Mac Tools Top Fuel dragster team are right in the thick of the NHRA Camping World championship battle. After a day of qualifying on Saturday, Kalitta entered the race as the No. 7 qualifier, with a tough first opponent, fellow championship contender Antron Brown. It was a critical round for Kalitta to take out a Top Fuel pursuer and advance the Mac Tools dragster to the quarterfinals.

Both dragsters launcher together and Kalitta pulled away as he closed in on half-track. He made his quickest pass of the weekend for the win, a blistering 3.713 seconds at 328.38 mph.

In the quarterfinals Kalitta took a starting line advantage from Rookie of the Year contender Justin Ashley and never trailed in the race winning with a time of 3.723 seconds at 328.46 mph. It was back to back low 3.7 second runs and it set up a monster semifinal race with Billy Torrence of Torrence Racing.

Knowing every round win was paramount the Mac Tools team gave Kalitta a strong race car. He jumped off the starting line but as his 11,000 horsepower dragster accelerated down track in the right lane it overpowered the racing surface and smoked the tires. Kalitta attempted to get it back under control but Torrence was on a smooth pass with no chance of reeling him in.

“We lost some ground today but we have two races left to make that up,” said Kalitta. “The last race will be 30 points a round. We will be Houston and I am not sure how similar the conditions will be. This Mac Tools team was strong this weekend. We made some great runs today and we got aggressive in the semifinals. We will put this race behind us.”

Kalitta is well within striking distance of the point leader and with two races to go a couple of wins would secure Kalitta his first championship no matter what happens with his competitors. The Camping World Drag Racing Series will be back on track at Houston Raceway Park in Baytown, Texas next weekend.

Quotable:
Doug Kalitta on the FallNationals atmosphere: “It was great to see so many fans in the stands. I know they had some restricts on attendance but there were a lot of people here. Toyota is based here in Dallas and it was great to show off for them as well as our other sponsors like Ferguson who just came on board this race. I am excited to get to Houston and get in front of some of our Mobil 1 supporters.” 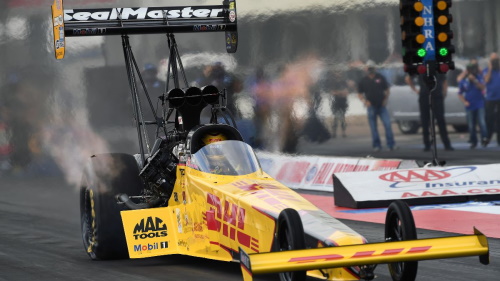 Shawn Langdon and DHL Race to Semis at FallNationals

A semifinal finish today for Shawn Langdon and the DHL Kalitta Air team was a bittersweet start to the two weeks of racing in Texas. The 2013 NHRA Top Fuel champion moved up into the Top Five in the Camping World Drag Racing point standings but the team was unable to stop eventual winner Steve Torrence in the process.

After a solid two sessions of qualifying that saw Langdon net a valuable qualifying bonus point for running the third quickest pass of the second session the team entered race day as the No. 4 qualifier. In the first round he took out journeyman racer Kebin Kinsley with a dominant run. Langdon took a starting line advantage and never trailed in the race. His 3.742 second run was not only quick enough for the win but also gave him lane choice in the quarterfinals.

The quarterfinal race was a pivotal match-up against another driver trying to get into the championship discussion. It was Langdon who closed the door with a hard fought win as both Top Fuel dragsters had issues on their respective passes. Langdon lost a cylinder at the hit of the throttle while his opponent Leah Pruett was losing multiple cylinders on her run. Langdon was able to keep her at bay with a starting line advantage and a masterful job of keeping his DHL dragster in the middle of the groove.

The DHL dragster made a solid run in the semifinals against the point leader and eventual winner Steve Torrence but it wasn’t enough. Langdon jumped off the line first but as the dragsters reached half-track he was losing ground. The DHL dragster got to the finish line stripe in 3.780 seconds but that wasn’t enough for Torrence’s 3.720 second run.

“We weren’t as successful as we wanted to be this weekend,” said Langdon. “We were quick in qualifying and we made some good runs today. I would have liked to have gotten that win in the semifinals for our DHL team and also to help Doug (Kalitta). There are two more races we will be racing to win both of them.”

Quotable:
Langdon on racing at Texas Motorplex: “This was the first of two races in Texas. It is good to get to some new tracks. There were a lot of fans here who were excited to see the DHL dragster. I just like getting out here and racing. I am looking forward to getting to Houston next weekend.” 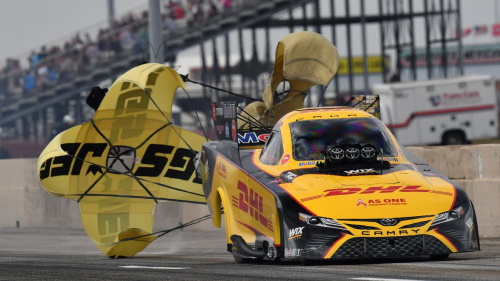 Todd and DHL Camry Race to Quarterfinals at Texas Motorplex

The DHL Toyota Camry and J.R. Todd rolled into the Texas Motorplex looking to add a Funny Car title to his Top Fuel win. The 35th annual AAA Texas NHRA FallNationals was a battle for Todd and his DHL-backed team. After two runs on Saturday his team entered race day as the No. 8 qualifier with a first round match-up against veteran Paul Lee.

Todd and most of the Funny Car class had to wait out two lengthy delays, a huge oil down in Top Fuel and then a massive fire by fellow Funny Car competitor Alexis DeJoria. Fortunately, DeJoria was unscathed from the fire but the ensuing clean up delayed the completion of the first round by almost 45 minutes. As the DHL team waited to get started track conditions evolved. Never the less Todd prevailed in the first round.

He took a significant starting line advantage with a superior reaction time and his DHL Toyota Camry Funny Car never trailed in the race lighting up the scoreboard with an impressive winning time of 3.881 seconds. It was his quickest run of the weekend and his speed, 331.36 mph would hold up as top speed of the event. He also secured lane choice against his quarterfinal opponent.

In the second round Todd’s day was cut short as he fell to eventual runner-up Matt Hagan in a close side by side race. Hagan’s winning elapsed time of 3.928 bested Todd’s 3.987 second pass.

“We just got outrun in the second round,” explained Todd. “We’ve got to figure out how to run hard against those DSR cars because they’re the ones stopping everyone right now. We’ll go on to Houston and figure it out.”

His first round win and performance numbers encouraged Todd but the 2018 Funny Car world champion know his team is capable of winning races and getting back into championship form.

“It was kind of bittersweet to do that and then slow down in the second round. It’s always good to win rounds, but we’re out here to win races. We’ve got two races to try to get two wins for DHL, Toyota and all of our great sponsors,” summed up Todd at the end of the day.

Quotable:
J.R. Todd on the final two races: “We have Houston and Las Vegas over the next two weeks. I like our chances. Hopefully conditions will be consistent in Houston and we can build on our performance numbers from this race. I have had a lot of success in Las Vegas. We have the opportunity to finish strong and that is what I want to do.”