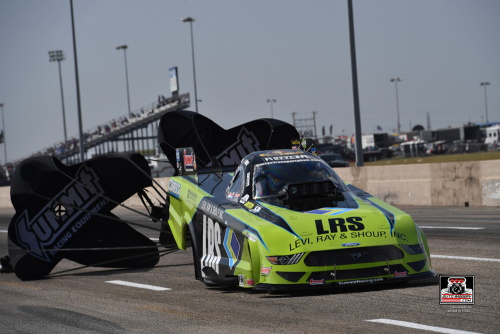 ENNIS, Texas (October 19, 2020) – A rebound from a slightly off kilter event two weeks ago in St. Louis was just what Tim Wilkerson and the Levi, Ray & Shoup Ford Mustang nitro Funny Car team needed. This weekend’s AAA Texas NHRA FallNationals was a reset for Wilk and his gang of trusty companions, and they’re leaving Dallas for Houston with heads held high.

In qualifying, Wilkerson was a top-three car all day with blistering 3.918- and 3.885-second passes down the Texas Motorplex dragstrip. He scored a bonus point as third-quickest in the first session and two more as second-quickest in the final qualifier. His lockdown into the No. 3 spot marked the third time in nine races this season that he’s started third or better, and he knew he had a horse for Sunday.

“It just lapped the tire hard leaving, and when it did that, it didn’t wear any clutch,” explained Wilkerson, who is now tied with Bob Tasca III for No. 5 in the NHRA Camping World Drag Racing Series Funny Car points.

“There was nothing I could do about it but cry. I don’t know if we’d have had anything for Beckman, but when we got back and looked at the graphs, it was going to make a good run before that. It doesn’t make any difference; it didn’t do it. But it lets us know that we were at least on the right track.”

Wilkerson is eager to get to Houston next weekend and strap back into his ferocious Ford Mustang. It’s been a long while since he’s claimed a trophy (Charlotte 1 in 2016), and he’s ready to get back to the winner’s circle.

“When the tracks are this good, it’s really hard to run with these guys,” said Wilk, an independent driver, crew chief, and team owner in a world of mega teams. “But we’ve got a good car with our LRS Ford. You can see that. There’s only two races left this year, but we’re optimistic we can win one of them.” 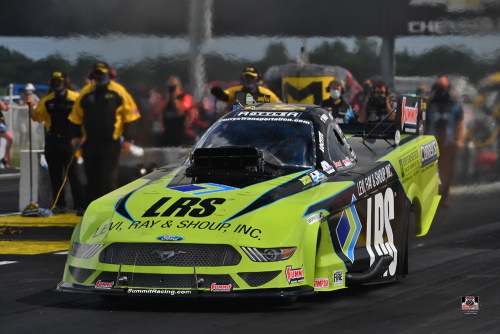