DALLAS (October 19, 2020) – Racing at the Texas Motorplex and the AAA Texas NHRA FallNationals for the first time Rookie of the Year front-runner Justin Ashley established himself as a fan favorite and a competitor making strides to build a competitive team for the future. On Saturday the driver from Melville, New York, turned heads with a career best elapsed time of 3.687 seconds in the opening round of qualifying. It was the quickest run of the session and held up as the second quickest qualifying time. It was another major step forward for the rookie driver and team. Ashley’s Strutmasters.com powered by MANSCAPED™ Top Fuel dragster which had the additional logos of Truck Air Ride Shocks displayed this weekend attempted unsuccessfully to grab the top spot back in the final session.

“It was one of those weekends. On the one hand we ran really well,” said Ashley. “We qualified No. 2 and made a career best run with a 3.68. (Crew chief) Aaron Brooks and the team did an awesome job. We just have something going on with the car that we have to fix and figure out. The bottom line is we will get it resolved and it will just take some time. These guys will do a deep dive this week and we will all improve.”

Today in the first round match up with Texan Lee Callaway Ashley was able to get the win to advance to the quarterfinals. His engine expired just as he crossed the finish line but he was rewarded with another win light. His winning time of 3.801 was enough to defeat Callaway’s 3.904 second pass. The aggressive nature of 11,0000 horsepower Top Fuel dragsters and the importance of round wins as a Top Five contending team has Ashley’s team giving every run their hardest effort. The young driver knows that breakage is part of the game but it doesn’t make it any easier.

“Any time you have some carnage. I think it helps that we will be back at the track next week,” said Ashley. “You really don’t want to stew on it too long. It is important to have a short memory. Part of what helps that is going to another race within five days. We will just put this race behind us. We are going to do everything we can to move forward in the right direction.”

For his efforts in getting a first round win Ashley paired up with championship contender Doug Kalitta who along with Ashley is one of the best leavers off the starting line. Both of these teams have mutual respect for each other and Ashley knew he would need to be at the top of his game. Again his Strutmasters.com dragster experienced issues in the loss but his team will spend the down time between the FallNationals and the Spring Nationals solving the issues.

“On any given weekend there are positives and negatives,” said Ashley. “You have to focus on the positive. That is really important. For us the big positive was that 3.68 second run. It was a nice high when I heard what we ran. That put a big smile on my face for sure. I am just proud of the guys because they work so hard to put us in a position to run like that. To see it pay off in real time was a lot of fun and exciting.”

As for his first experience racing in the Lone Star State Ashley made the most of the limited fan interaction available. The Texas Motorplex executed a number of events to give the fans some added value. This morning all the qualified drivers were paired up and paraded in front of the grandstands during the opening ceremonies. The extra effort to connect with the fans was a welcomed addition in Ashley’s opinion.

“This was a really fun weekend for me. This was my first time at the Texas Motorplex,” said Ashley. “One of the things that stood out to me was the fans. A lot of fans came out and it was really awesome to see. Even more than seeing them was the engagement we had at the ropes. I spent a lot of times talking with fans and I think the driver introductions were really cool today. That was a great job by the Texas Motorplex. With all that is going on that was a fun and creative way to start the race and introduce the drivers.” 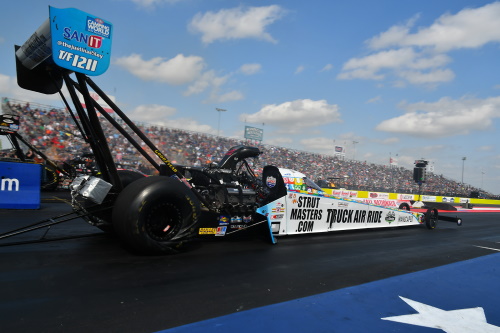